Grupo Aeroportuario del Sureste SAB CV (NYSE:ASR), or ASUR, continues to benefit from its concession to operate the Cancun airport, which drives the bulk of its traffic and growth. A record 21.4 million passengers passed through that airport last year, up 9.3% year over year, accounting for 75% of the company's total traffic. With additional capacity expansions on the way, that key location should continue to drive the company's earnings higher.

Traffic at Cancun continues to grow: 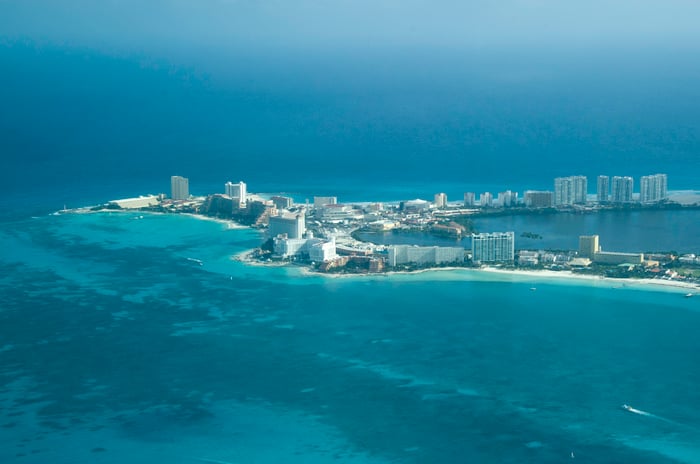 One way ASUR leverages traffic growth is by adding new commercial spaces to provide more goods and services to travelers. For example, last year in Cancun the company opened 10 new food and beverage, retail, and banking locations. Overall, these new locations helped drive a 21.4% increase in commercial revenue on just an 11.9% jump in traffic.

ASUR recently completed its Terminal 3 expansion, which added six new gates that will increase the passenger traffic capacity of that terminal from six million to 10 million. The company also remains on pace to complete the first phase of Terminal 4 within the next year, which should increase its overall capacity by another 9 million more passengers.

That said, growing hostility between the U.S. and Mexico could cause some more turbulence for ASUR and fellow Mexican airport peers Grupo Aeroportuario del Pacifico (NYSE:PAC) and Grupo Aeroportuario del Centro Norte (NASDAQ:OMAB). The stock prices of all three companies are down since election day and could continue to bounce around if tensions grow worse. One potential headwind is if President Trump makes good on his promise to renegotiate NAFTA, which could result in less air travel between the neighboring nations. ASUR appears to be better insulated against this risk than its rivals since its primary airport is a tourist destination, but it is something to monitor.