Amid SunPower Corporation's (NASDAQ:SPWR) struggles over the past year, including the fourth quarter of 2016 in particular, the company may finally be showing some promise in residential solar, a business long dominated by Tesla's (NASDAQ:TSLA) SolarCity, Vivint Solar (NYSE:VSLR), and Sunrun (NASDAQ:RUN).

Customers are now starting to shun the long-term contracts that come with leases, choosing to pay cash or take out loans for their solar systems. And when they begin to make their own choices about solar equipment, SunPower's high efficiency, superior quality, and good aesthetics have led to rising market share. Which of course begs the question: Is this a sustainable win that SunPower can build off for years to come? 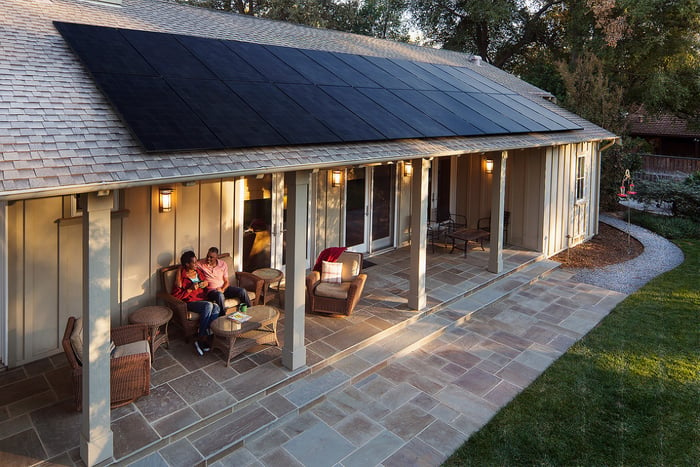 Why SunPower is different in residential solar

SunPower has a few key differentiators from installers like Tesla, Vivint, and Sunrun. The first is that it sells through a dealer network rather than doing sales and installation directly. That means SunPower can sell a dealer panels, complete solutions like Equinox, and lease financing, or any combination of the three. It has also built out loan partners, allowing dealers to offer lease, loan, and cash sales, whereas national competitors still have an incentive to push customers to leases.

The Equinox solution, which includes micro inverters and racking, is also a differentiator, making it more cost effective to install X-Series panels. And there's growing evidence that SunPower's strategy is winning.

The past year has been really terrible for most residential solar companies. Sales have been harder to come by and the market has transitioned away from national installers and leases to smaller installers and loans or cash sales. But that plays into SunPower's hands, and the company says it's now in the #2 position in the residential solar market.

The moves to smaller installers, away from leases, and toward higher efficiency all play in SunPower's favor. And that should lead to growing sales and continued strong margins, which management said were around 20% when you pull out one-time restructuring charges.

The interesting dynamic heading into 2017 is that customers are moving toward local and regional installers, but battery systems are going to become more common on the market. And the development and smart controls behind a battery system will require a large company to drive the economic benefits batteries can bring.

This could put SunPower in an enviable position, supplying products and technology to local and regional installers while still having the ability to control energy storage at a corporate level, creating virtual power plants or individualized charge and discharge cycles depending on local rate structures. These are capabilities Tesla and Sunrun are starting to offer, but they come with their own installation infrastructure and don't give customers the same equipment or financing choice as SunPower's dealer network.

It's possible that SunPower could be well positioned in energy storage as well, although it hasn't released a full strategy given the small size of the market. But if it does, residential solar could go from a point of strength within the business to a driver of value for the company long-term.

If the strategy I laid out above is a real winner for SunPower, we should see MW deployed in residential solar rise, revenue from residential solar grow, and margins remain over 20% and potentially trend higher over time.

Given the fact this is the one bright spot for earnings right now, it's very possible management will be able to leverage residential solar growth in the future. That's the surest way to get back to profitability given the challenges in commercial and utility markets lately.