From pulling up location coordinates to finding a free parking spot or opening the garage door, virtual assistants in cars are going to play a key role in powering the connected-car revolution. The voice-enabled virtual assistant space is becoming hotly contested among tech giants.

Amazon.com (NASDAQ:AMZN), however, seems to be taking the lead in this market with its Alexa Automotive platform, which is powered by the Echo voice assistant. The company has lined up deals with some of the biggest automakers, and is also receiving support from third-party accessory manufacturers such as Logitech (NASDAQ:LOGI) that could give Alexa a major push.

Alexa's already in the car

The Consumer Electronics Show held in Las Vegas last month showed that Alexa is finding favor among carmakers, as Ford (NYSE:F) and Volkswagen (OTC:VWAGY) both said they had signed up to use the platform for services including weather updates and navigation. This is a big deal for Amazon; it needs to sign up big automakers for Alexa to steal a march on rivals such as Microsoft's Cortana and Alphabet's Google Assistant.

Ford is integrating Alexa with its SYNC 3 infotainment system in order to let people do more via their cars. Once Ford starts offering the technology this summer, drivers will be able to perform a wide range of voice-enabled functions. In fact, Alexa can send commands to the vehicle to do things such as check fuel levels or start the engine, even before the driver starts the journey.

Inside the car, Alexa can perform navigation duties, read an audiobook, or create shopping lists on Amazon. Additionally, the driver can control smart-home functions, such as setting the thermostat or adjusting the lighting inside the house, from the car. 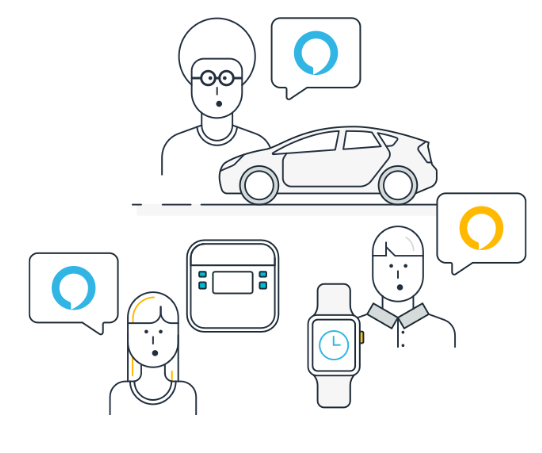 Volkswagen, meanwhile, is going to make Alexa a part of its Car-Net infotainment system, while Hyundai's 2017 models can connect to Alexa using the manufacturer's Blue Link connected-car app. These are big wins for Amazon. Volkswagen was the world's biggest auto company last year with sales of 10.3 million units. Ford stood third with 6.2 million units in sales.

Alexa's direct integration into Ford and Volkswagen vehicles is important for Amazon, since its rivals haven't managed to launch such big accounts so far. Microsoft, for example, will be in Nissan and BMW vehicles with its Cortana virtual assistant, but neither of these two companies is as big as Ford or Volkswagen. Together, Nissan and BMW had combined sales of just under 8 million last year, which is half of what Ford and Volkswagen sold together last year. Alphabet's Google Assistant, on the other hand, will drive Fiat Chrysler Automobiles' UConnect infotainment system; FCA's sales last year stood at 4.7 million units.

Amazon, therefore, could be well on its way to providing the platform of choice for automakers. This is not surprising as Alexa links up with Amazon's smart-home platform, Echo, the massive sales of which give automakers additional incentive to go with the e-commerce giant's virtual assistant.

Amazon's Echo-enabled smart-home virtual assistant platform seems to be a hit. Consumer Intelligence Research Partners estimates that there are 8.2 million customers who own an Echo device in the U.S., with 3.1 million devices sold just in the holiday quarter. In comparison, there were just an estimated 3 million Amazon Echo devices on the market at the end of 2015, so the number of homes using them has almost tripled in the past year.

What's more, a VoiceLabs report indicates that the installed bases of Amazon Echo and Google Home will triple this year, as combined sales of both devices hit 24.5 million units in 2017. Though the report didn't specify a split between the sales for each device, it indicated that Amazon Echo will dominate the market, as it offers customers the option to shop directly from Amazon.com.

It seems automakers will choose to go with a platform that is gaining the most acceptance among consumers. Exploding sales of the Echo smart-home devices indicate that Amazon is delivering on this front.

How Alexa can get into older cars as well

Alexa's market is not restricted to new cars, thanks to third-party accessories. For instance, Logitech's ZeroTouch aftermarket "smart car mounts," which were launched this month, let you hook your smartphone to Alexa in your car. Logitech has priced its mounts at $59.99 for the air-vent version and $79.99 for the dashboard version, which makes them accessible to a huge number of existing car owners.

Logitech is supporting all 8,000 available Alexa skills, so users can access all of the voice assistant's features, ranging from smart-home controls to navigation. With an affordable price point, its devices should enhance the appeal and reach of Alexa -- benefiting Amazon considerably, given the number of vehicles on U.S. roads.

The average age of an American vehicle rose slightly to 11.6 years a year ago. Americans are retaining their vehicles for longer periods -- on average, 79.3 months of ownership, according to IHS Markit -- due to quality improvements. As more than 264 million light vehicles are plying U.S. roads, and many are older models, there's a big market for things like third-party accessories such as Logitech's mounts.

Tractica estimates the worth of the virtual digital assistant market at $15.8 billion in 2021, compared to just $1.6 billion in 2015. Automotive infotainment and smart-home systems will play a big role in driving this market and Alexa is in a prime position to benefit from the opportunity in connected cars.