MSA Safety (NYSE:MSA) faced several headwinds during the fourth quarter, including a tough comparable in the year-ago period. Because of these factors, revenue and earnings dipped. That said, the company still performed well last year despite the headwinds thanks to new products, acquisitions, and cost reduction programs. Meanwhile, it's starting to see some signs that 2017 could be a much better year.

MSA Safety went up against a tough quarter. 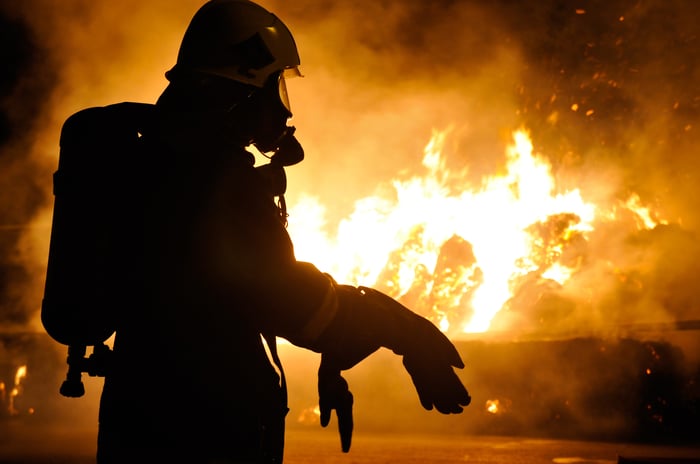 CEO William Lambert commented on the quarter by saying:

Our results for 2016 reflect strong returns on the strategic investments we've made in new products, acquisitions and restructuring programs to drive earnings expansion in a challenging economic cycle. Despite a difficult quarterly revenue comparison -- attributable to the clearing of a significant backlog for self-contained breathing apparatus (SCBA) in the fourth quarter of 2015 -- we achieved all of our key financial targets for the year and posted record net income of $92 million.

As Lambert noted, the company faced a pretty tough comparable quarter due to an initial rush of sales for its latest SCBA. As a result, sales in its breathing apparatus segment were down 17% year over year. However, the company offset some of that with higher sales in its fall protection and fixed gas and flame detection businesses, largely due to acquisitions. In fact, acquisitions added 3% to the top line versus last year. Those deals, along with its ability to keep a lid on costs, helped the company mute some of the pressure from the challenging market conditions.

While 2016 was a challenging year due to slower growth, the company feels much better about 2017. Lambert said that as he looks ahead, he sees "early signs of strengthening macro conditions and an increased order pace across several of our industrial-related product areas." Those improvements, when combined with the actions it took last year, "positions us well to drive enhanced shareholder value in 2017 and beyond" according to Lambert.