Biotechnology companies took a long time to start paying dividends, because the growth potential that most companies in the industry had made it smarter to reinvest free cash flow into new discoveries rather than returning capital to shareholders. Yet Amgen (NASDAQ:AMGN) became the first exception to that rule in 2011 when it started paying a dividend, and since then, the company has become increasingly committed to making rising payouts to its shareholders. Now, investors want to know whether Amgen can keep its leadership role in providing dividend income. Amgen has plenty of promise, and it's built up an impressive short history of dividend growth.

Amgen's dividends only go back six years, but even its modest beginning represented a sea change in the biotechnology industry. In mid-2011, then-CEO Kevin Sharer outlined key elements of a new strategic vision that the company was aiming to achieve in the long run. Among the key planks of the strategy were bringing medicines to market to treat serious illness, invest in research and development, manufacture products efficiently and reliably, expand into emerging markets, keep earnings growth faster than sales gains, and be smart about capital allocation and balance sheet strength. 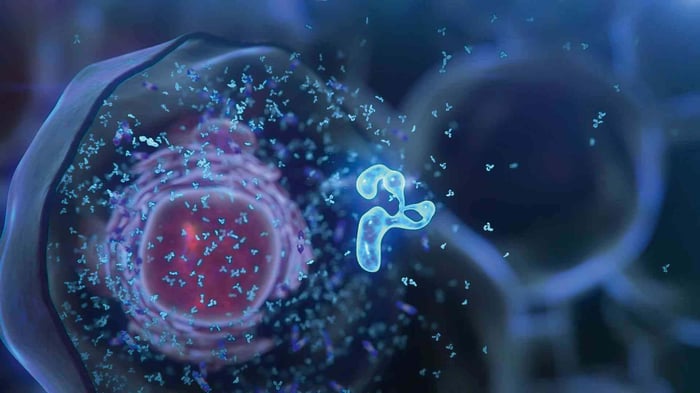 In particular, Amgen approved a dividend policy that included its first quarterly payout. The first payment of $0.28 per share reflected Amgen's determination that the company had ample liquidity and cash flow expectations to afford the payout. More broadly, Amgen said that it would look at maintaining an annual payout ratio of about 20% of earnings. The biotech giant also committed to "plans to increase the dividend meaningfully over time," while also using buybacks to supplement return of capital to shareholders. 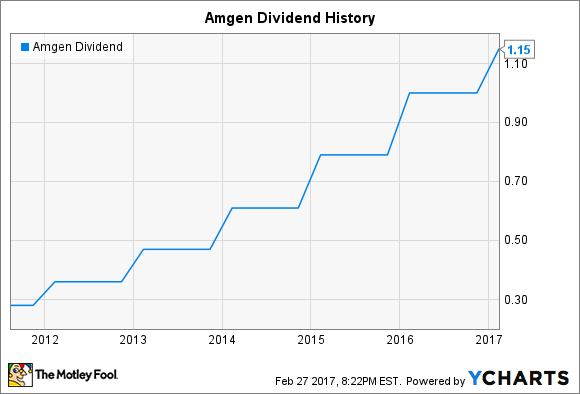 Since then, Amgen has lived up to that promise. Each year between 2012 and 2016, Amgen gave investors annual dividend increases of between 25% and 30%. Only the most recent payout boost in early February broke that mold, and even then, a 15% boost brought the quarterly payout to $1.15. That's more than quadruple what Amgen started paying out less than six years ago.

What's ahead for Amgen's dividends?

What's become clear over the years is that Amgen has seen dividends as playing a more important role in its overall capital allocation. For instance, the recent quarterly increase brings Amgen's total annual payouts to $4.60 per share. That's not exceptionally large compared to its $175 share price, working out to a solid but not extravagant dividend yield of 2.6%. However, with the biotech giant having said that it brought in $11.65 per share in adjusted earnings in 2016 and expects $11.80 to $12.60 per share for 2017, the payout ratio has crept upward into the 30% to 40% range.

Moreover, Amgen might face some challenges ahead. For instance, the company's key new blockbuster Repatha, which treats high LDL cholesterol levels, comes with a five-digit price tag. Investors in pharmaceutical stocks have noted increased resistance from the federal government in response to allegations of price gouging from consumer advocates. Pressure on Amgen and its peers to lower prices could eat into the biotech's profits, and that in turn could make it harder for dividends to rise.

In any event, Amgen has historically made just a single dividend increase each year, and so investors shouldn't expect a future move before the end of 2017. However, assuming that the year goes as well as the company believes it will, Amgen will likely reward investors again with a double-digit percentage increase in early 2018.

As strong as Amgen's dividend history has been, it's been only a small part of the company's massive returns for long-term investors. By being smart about capital allocation and ensuring that it can both pay shareholders the income they want while also keeping enough cash on hand to fund ample research and development opportunities, Amgen has put itself in the best position possible to support its future growth and meet the expectations of dividend investors in the years to come.