Please ensure Javascript is enabled for purposes of website accessibility
Free Article Join Over 1 Million Premium Members And Get More In-Depth Stock Guidance and Research
By Neha Chamaria - Feb 28, 2017 at 8:04AM

Gold miner Agnico Eagle Mines' ( AEM 1.55% ) recently released fourth-quarter and full-year 2016 numbers haven't been received well by the market. The stock is down over 14% since Agnico's Q4 earnings per share checked in substantially below analysts' estimates a couple of weeks ago. This report, moreover, comes at a time when senior miner Barrick Gold ( GOLD 1.48% ) reported a blowout fourth quarter followed by a dividend increase, while Goldcorp Inc. ( GG ) swung to big profits last quarter, beating Wall Street estimates by a pretty big margin.

So where did Agnico falter, and do its muted numbers portend a tough year ahead for the stock, especially after its stupendous 59.8% rally in 2016? Maybe not.

2016: an incredible year for Agnico

More often than not, headlines don't reveal the true picture. Agnico may have disappointed analysts, but it earned $0.28 per share in Q4 after having suffered a loss of $0.07 per share in the year-ago quarter. Of course, Agnico's profits would be smaller if not for gains on impairment reversals, but it was still profitable on an adjusted basis. 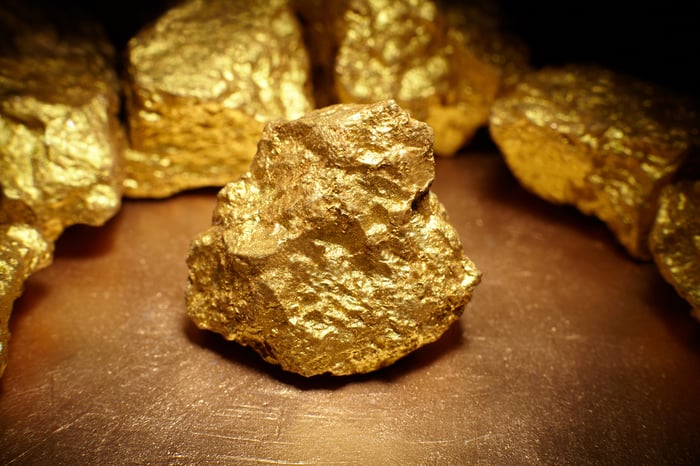 More importantly, impairment reversals are rare, positive instances. A company reverses impairments on assets when it considers them valuable and not a liability anymore. In Agnico's case, the reversals relate to certain deposits at its Meliadine and Meadowbank mines in northern Canada, which were written down some years ago. Having struck gold at these deposits during its recent exploration expansion programs, Agnico reversed the writedowns and extended its production guidance through 2020, which I'll come to later.

While this development was one of Agnico's biggest highlights from 2016, it wasn't the only one. 2016 was, in fact, a remarkable year for the miner from several aspects. Consider:

The last one, of course, is among Agnico's most important achievements for 2016, as it places the miner at the lower end of the industry cost curve even when compared with larger miners such as Barrick, Goldcorp, and Newmont Mining ( NEM 2.12% ). To be a low-cost producer in a volatile industry like gold is a huge competitive advantage. 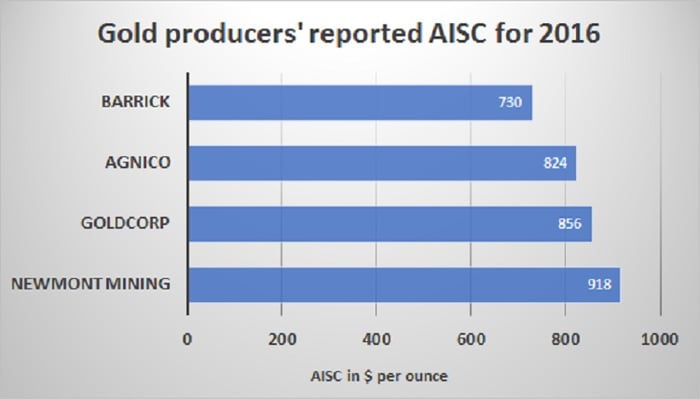 Its low production cost positions Agnico to remain profitable even if gold were to fall 20%. But can the miner continue to deliver on production and costs in 2017?

Agnico has given out a pretty muted guidance for 2017, projecting its production be around 1.6 million ounces. Management gave out similar guidance last year, though it exceeded it. As for AISC, Agnico expects it to be between $850 and $900 per ounce in 2017, which is disappointing given the levels it achieved last year. Declining production is largely to blame. Production from Agnico's Lapa mine, for instance, is expected to last only through the first quarter of this year. However, Agnico is confident of maintaining its reserves at 10 to 15 times its annual gold production.

It's also important to understand that production fluctuations are inherent in the gold mining business and not limited to Agnico. To give an example, Goldcorp's production slipped nearly 20% last year compared with 2015. From that standpoint, Agnico's ability to reduce its AISC in 2016 despite higher production is commendable, as it reflects management's focus on exploring lower-cost mines. Meliadine and Meadowbank are great examples. Both projects should begin production by the third quarter of 2019, pushing Agnico's total gold production to 2 million ounces in 2020. While Meadowbank's life-of-mine average AISC is expected to be $850 per ounce, Meliadine's average AISC could average as low as $720 per ounce.

So even if Agnico's costs don't improve much in 2017, investors should remain hopeful that management has plans in place for the long term. Another encouraging factor about the miner is its cash flows: Agnico has remained free cash flow-positive in four out of the five past years. While the miner's dividends have been wobbly, it increased its dividend by 25% last year and has paid one every year since 1983. In fact, Agnico's FCF has grown at a much faster clip than Barrick's and Goldcorp's in the past five years. 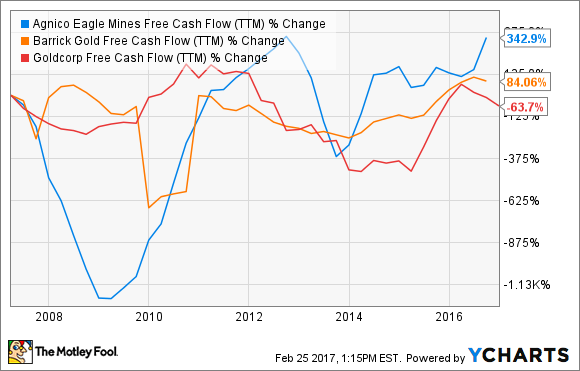 Also, don't forget that Agnico will be spending big sums of money to advance its Meadowbank and Meliadine projects, so its cash flows may not grow much this year and next. But that'll probably change from 2019 onward, when Agnico's production should start rising again while AISC improves. That should encourage you to consider any dip in Agnico's stock in the near term an opportunity, as long as you're a long-term investor.