Pandora is overhauling its business model, but are the changes enough?

It's remarkable for a company to have operated since 2000 and never turned an annual profit. Yet that's exactly the state of affairs at Pandora Media ( P ). Even as Pandora's sales have risen more than 7,000% since 2009, its net losses have widened in recent years. 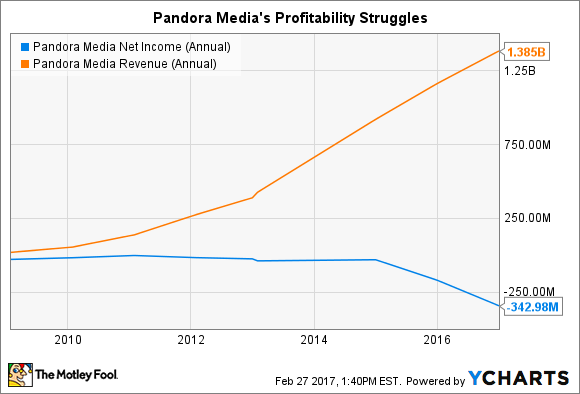 Will Pandora Media ever turn a profit? Let's take a look.

The simple explanation to Pandora's profitability woes is that its business model doesn't scale. The reasons are a little more complex -- but also crucial for investors to understand.

Pandora's business model is straightforward -- it's a music streaming service that creates algorithmic playlists for listeners. It generates revenue primarily by playing advertisements that it inserts into its audio playback, just like an FM or AM radio station. Advertising revenue makes up roughly 80% of sales, with its ad-free subscription Pandora One service account for the other 20%.

Pandora is required to pay rights holders -- generally, artists and their representatives -- a pre-set fee for each song played, which was established in 2016 at $0.00176 on average.  That might not sound like much, but keep in mind Pandora's roughly 80 million users stream billions of hours on the platform each year -- 21.11 billion hours In fiscal 2015, to be exact. Content licensing payments are Pandora's single largest expense by far, eating up roughly 50% of the company's revenue in recent years.

Factoring in other costs of goods sold, Pandora's gross margin has hovered between 45% and 40% in the three most recent full fiscal years. However, operating costs have far outstripped gross profit. In fact, operating expenses have increased from 45% of sales in fiscal 2013 to 55% in 2015, leaving the company's bottom line mired in the red ink.

Much of the increase in Pandora's operating expenses has been associated with its efforts to scale its ad-sales operations, which are the backbone of its long-term revenue-generation plans. Looking to the future, though, conflicting forces make it difficult to predict whether Pandora will eventually turn a profit. 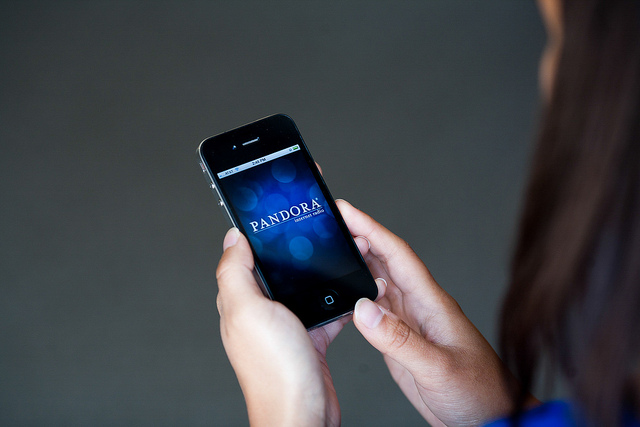 Pandora's economics should continue to improve to some degree, though a few factors make its long-term profit profile unclear.

In terms of positives, recent changes to its content licensing cost structure finally provide a path toward eventual profitability for the company, all else being equal. In late 2015, the government body that sets the per-play royalty rates for all radio stations, the Library of Congress' Copyright Royalty Board (CRB), changed the rate paid by so-called "commercial webcasters," including Pandora, to the aforementioned $0.00176 per play, plus a potential annual inflation adjustment. With inflation running in the low single digits, Pandora should be able to grow its per-song revenue far faster than its per-song costs, as continued investments in its ad-sales organization continue to bear fruit.

But several factors could also interfere with achieving profitability. For one thing, Pandora is geographically constrained. It operates only in the U.S, Australia, Canada, and New Zealand, where it can easily access government-set royalty arrangements. To expand its international reach, the company will need to negotiate for international streaming rights directly with the major record labels, which traditionally seek higher per-use rates than those set by the CRB. Paying higher per-use rates to obtain international streaming rights would serve as a headwind hampering Pandora's push toward profitability .

Making matters worse, streaming competitors such as Spotify and Apple have already aggressively expanded their streaming services around the world. So Pandora might have a difficult time acquiring new customers if it eventually takes its service global.

I've been critical of Pandora in the past. After enjoying a clear lead in creating the streaming industry, the company remained wedded to its ad-supported radio playback strategy for far too long, leaving the door open for services such as Spotify and Apple to become leaders in on-demand streaming. Pandora is indeed taking corrective action to position itself to end its money-losing ways, but with multiple legitimate obstacles still lying in its way, it's by no means a given that Pandora will become consistently profitable.