Americans drink less soda. In fact, per-capita consumption for carbonated soft drinks peaked in the United States in 1998 at nearly 53 gallons, dropping to 41 gallons in 2015, according to data from NPD Group.

It's a drop that began in 1999 as people became more aware of the fact that drinking sugary beverages contributes to obesity, leads to diabetes, and causes other health problems. Coca-Cola (NYSE:KO), a company built around soda, has responded to changes in demand -- not just domestically, but also in much of the developed world -- in a number of ways.

In the 2000s, the company bet heavily on Diet Coke, but in recent years, consumers have become concerned about the artificial sweeteners used to create zero-calorie beverages. Coke responded to that by greatly diversifying its portfolio into non-soda brands. Today's Coca-Cola may still be named after the company's famous sugary beverage, but it sells a wide range of juices, waters, energy drinks, sports beverages, and bottled coffees and teas.

However, while Coca-Cola has become less reliant on soda for its success in the U.S. or across the globe, the company still has deep ties to the product that built its brand and it's not giving up on the idea of increasing sales. Incoming CEO James Quincey, who takes over from current boss Muhtar Kent on May 1, laid out his company's plan to make Coke (and its other soft drink brands) popular again, during the company's Q4 2016 earnings call. 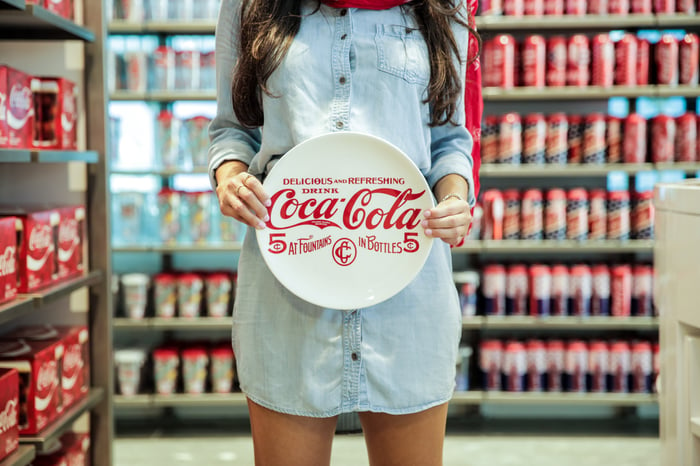 Coca-Cola held its own in 2016 when it came to U.S. soda sales. The company, which saw total revenue drop 5% for the full year, was able to stabilize the sparkling beverage category in its home market actually growing volume by 1%. The company does not break down soda/sparkling sales across all its global markets, but Quincey acknowledged that the company would focus on driving revenue growth in "sparkling soft drinks" in 2017 in his remarks during the Q4 earnings call.

"We'll do this through a continued mix of great marketing, great execution combined with helping reducing over-consumption of added sugar," he said. "This includes the reformulated products to reduce content, leveraging our one-brand strategy to expand zero sugar products, and driving the availability of small packs."

Essentially Coca-Cola will be fighting against the consumer mindset toward products with added sugar in two ways. First, the company will leverage lower and no-sugar products like its reduced-calorie Coca-Cola Life brand, and its "Zero" line of no-calorie, no sugar products. Second, it's going to give consumers less for their dollar by pushing smaller cans, like its 100-calorie mini-cans.

"All of this we're approaching with a mindset of test and learn, knowing that not every strategy will work in every market but the speed, flexibility and adaptation are paramount to success," Quincey said.

Kent echoed his successor's remarks noting that in developed markets the company would look to drive revenue more than volume. Basically the company plans to build on a strategy of selling people less soda for more money in a way that consumers seem to accept.

"You can see that happening in the U.S. marketplace as we focus on smaller packages," he said. "...So net-net, likely overtime, developed markets will get more price mix and slightly less volume."

Coca-Cola has not put all its eggs in the soda basket, but it has also decided to fight to maintain its core brands. The company now has a well-diversified portfolio of beverages that don't have the negative stigma soda does and it is hoped that those will drive the company's growth going forward.

That said, while the decline of soda sales in the U.S. often gets compared to what has happened to cigarettes, the two products are not entirely equatable. The addictive nature of smoking makes it unlikely that smokers will simply cut down their intake or switch to healthier cigarettes (if such a thing existed). Soda fans however can make those changes. They can opt for low or no-calorie options, cut down how often they consume full-calorie soda, or even switch traditional 12-ounce cans for smaller 100-calorie options.

Coke can keep soda strong by adapting to shifting demand and the company has a clear strategy to do that. Those efforts may not reverse volume declines, but they should protect revenue, and keep soft drinks as a viable product line.