Now that hedge funds have submitted their mandatory regulatory filings for the fourth quarter of last year, we can get a sense of the stocks they're buying. When it comes to bank stocks, there are four at the top of the list: Bank of America (NYSE:BAC), JPMorgan Chase (NYSE:JPM), Wells Fargo (NYSE:WFC), and Bank of New York Mellon (NYSE:BK).

Based on an analysis by FactSet, a market-research firm, the 50 biggest hedge funds in the United States piled heavily into the financial sector last quarter. They did so presumably after the unexpected results of the presidential election led analysts, investors, and commentators to believe that banks could soon make a lot more money. 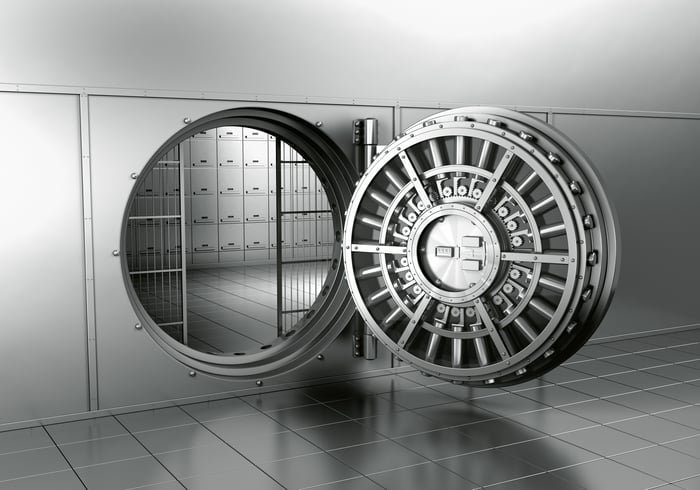 Trump promised on the campaign trail that he would "dismantle" the Dodd-Frank Act, which has dramatically increased compliance costs in the bank industry. If he were to follow through on this, not only would banks gain more operational flexibility, which could bolster revenue from existing business lines, but they'd also see their noninterest expenses decline.

On top of this, many people believe that Trump's pro-business tilt will translate into faster economic growth, spurred on by tax cuts and a $1 trillion infrastructure program. If true, this would increase the demand for loans and, thus, bank revenues. Taken together, then, it seems to make sense why the market has become so optimistic about bank stocks.

The sector's biggest winner in the fourth quarter was Bank of America, which accounted for nearly half of the $3.5 billion that flowed into the sector from the 50 largest hedge funds. In addition to Bank of America, three other bank stocks continue to resonate with the hedge fund industry.

This table shows the four bank stocks that rank among the 50 most popular stocks held by the hedge funds tracked by FactSet. Bank of America ranks 13th on the list, JPMorgan Chase comes in 18th, Wells Fargo 32nd, and Bank of New York Mellon ranks 43rd.

Moreover, all of these banks saw an inflow of capital from the hedge fund industry in the final three months of 2016. Excluding Bank of America's enormous haul, Bank of New York Mellon was on the high end, with a $359 million inflow. Wells Fargo was next, at $351 million. And JPMorgan Chase brought up the rear, at $284 million.

While these inflows help explain why bank stocks soared after the presidential election, investors should be cautious about using this data to inform investments today. Now that bank stocks are trading at multiyear highs, and in some cases all-time highs, it's probably safe to assume that the world's most sophisticated investors are no longer rabidly piling into these stocks at the same rate that they did at the end of last year.