At first glance, you'd expect commercial solar projects would be SunPower Corporation's (NASDAQ:SPWR) strongest business. It has the development expertise to sell to commercial customers, has a pre-engineered solution in Helix, and has a high-efficiency solar panel that can leverage the limited space on rooftops or parking lots. But commercial solar has been a drag on the business of late.

Its negative gross margin of 5.9% in the fourth quarter was not the sign of improvement investors were looking for, although that did include charges for underused capacity, restructuring, and the sale of excess polysilicon. But even factoring out those issues, margins were likely only mid to high single digits. Given its struggles in commercial solar, here's how SunPower sees a potential turnaround and how investors should measure success. 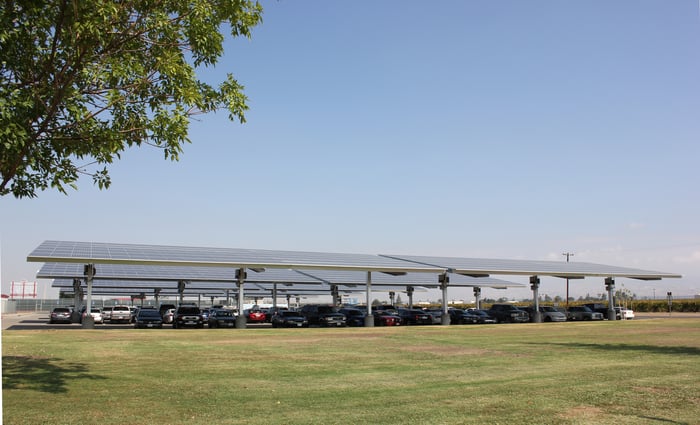 Helix and the vision for commercial solar

SunPower is hoping to take its solutions business from residential solar to commercial solar with Helix. It's a plug-and-play solution that can be put on roofs, or installed in pre-designed carport form or as a small, ground-mounted system. Depending on the customer's needs, it can use the company's X-Series, E-Series, or its lowest-cost and least-efficient P-Series solar panel product.

What makes commercial solar difficult is that it involves many times more points of sale to match the scale of a utility solar project, but doesn't have nearly the same positive economics for buyers as a residential solar project, because the electricity prices businesses pay are lower. This leaves it stuck in the middle, despite the fact that commercial rooftops are an obvious place to install solar.

The aim of Helix is to standardize components in order to make everything after the sale as easy as possible. No need to reengineer each roof; it's more or less plug and play -- at least that's the vision.

This Helix strategy has been in place since October 2015 when the product was announced. SunPower has had some success, gaining the No. 1 market share in commercial solar. But the financial results haven't been as good as management hoped.

CEO Tom Werner has pointed to poor execution on the product, which indicates that costs aren't as low as expected and sale expenses are higher. The company is now trying to focus more on reliable customers like school systems, universities, local governments and large Fortune 500 customers, which can result in multiple solar installations from a single sale.

It may make progress on the cost front, but those are really the reasons commercial solar hasn't become an earnings driver for SunPower yet.

Why there could be upside ahead

Look for SunPower to leverage its large commercial solar business and its energy-storage capabilities to offer an integrated solar plus storage solution, and maybe add some smart energy solutions as well. If those products gain traction, SunPower could build a business that would be hard for competitors to replicate, and provide more value to customers. Long term, that's the vision for commercial solar at SunPower. While Helix is a step in the right direction, a lot more progress needs to be made before this is a sustainable growth business for the company.