Please ensure Javascript is enabled for purposes of website accessibility
Log In Help Join The Motley Fool
Free Article Join Over 1 Million Premium Members And Get More In-Depth Stock Guidance and Research
By Jeremy Bowman - Mar 3, 2017 at 10:00AM

The RFID chip-maker's stock tumbled on weak guidance in its earnings report.

Shares of Impinj, inc. (PI 0.61%) got hammered last month after the radio frequency ID chip-maker turned in a disappointing earnings report. The stock slipped 19.5% according to data from S&P Global Market Intelligence. As the chart below shows, much of those losses came immediately after its earnings report on February 16. 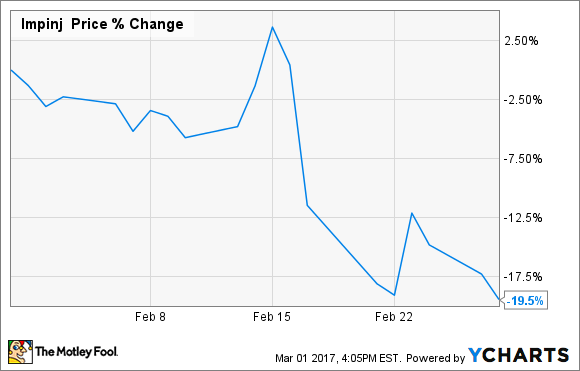 Impinj actually beat estimates in its fourth-quarter report. The company saw its top-line expand 49% to $33.7 million, beating estimates at $32.4 million. Earnings for the internet-of-things play, meanwhile, increased from $0.07 to $0.11 a share, which topped expectations at $0.09.

The maker of RAIN RFID chips, which helps supply chains frictionlessly track items, has been highly volatile since its July 2016 IPO.

Looking ahead to 2017, the market seemed to be disappointed by Impinj's guidance for the first quarter. The company projected revenue of $30-$31.5 million for the current period and adjusted earnings per share ranging between a loss of $0.06 and a profit of a penny. At the time of the announcement, analysts had expected a profit of $0.02 a share.

Weak guidance like this has a tendency to sink high-flying tech stocks like Impinj, but investors should me mindful that this a young company with a promising future ahead of it. Investors should remember to look past a single quarter's guidance.