You might think all this company does is provide weapons. If so, you're missing the real story.

Pay the most attention to a company's moat. The other stuff is important -- cash flow, valuation, etc. -- but not as much as the moat.

If there is one piece of advice I wish I'd gotten -- and understood -- at the beginning of my investing career, the two sentences above would be it. Over my nine years as a Foolish investor, nothing has been more important than understanding a company's moat, or sustainable competitive advantage.

The company that I'm calling on as my top stock to buy in March recently reported earnings that indicated a moat growing ever wider. But the market was not impressed, and it sent shares down by as much as 12%. That presents a buying opportunity for investors, and I plan on putting my money where my mouth is by buying (more) shares for my own portfolio.

A wide moat can provide a lot of protection from competition. Image source: Getty Images.

My top stock to buy in March is TASER International

You could be forgiven for thinking that an investment in TASER International (AXON -1.85%) is just a play on stun guns. They do, after all, account for three-quarters of the company's sales.

But the TASER's mission statement is "Protect life. Protect truth." The stun guns do an admirable job of protecting life -- by rendering a suspect as a non-threat for up to five seconds -- but the "Protect truth" part opens up a whole new ball game of optionality.

This is where the company's Axon line of body cameras comes into play. They can help diffuse the types of situations we saw all across America last year where an officer-involved shooting led to mass civil unrest.

But let's be clear: There's nothing very special about the company's cameras. As any investor in GoPro will tell you, the entire industry is quickly becoming commoditized. There are no real moats.

How TASER created a moat where others can't

Here's how TASER differentiates itself: It is creating an ecosystem. This ecosystem includes not only body and dashboard cameras, but a platform where that information can be stored, and a newly announced artificial intelligence (AI) application that can help law enforcement spend less time on paperwork, and more time in communities. 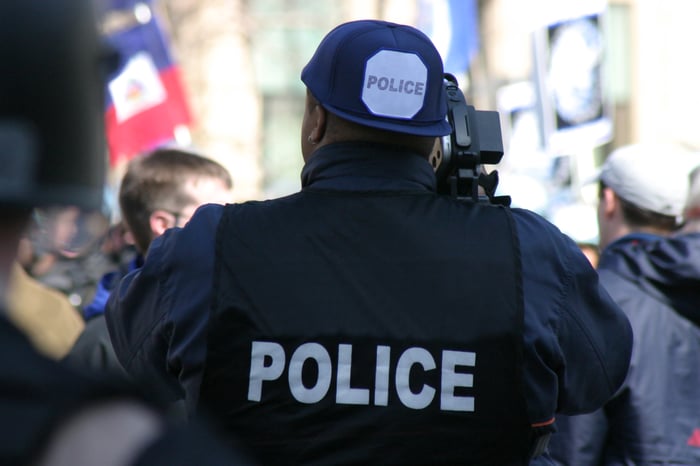 The Evidence.com platform creates a space for law enforcement officials to store the footage from Axon cameras. When a department has a single platform for all of its footage, and has trained all officers how to use the platform, switching costs become painfully high. No one wants to try to migrate so much video from one server to another; doing so would require hours of retraining personnel, and if any evidence was lost in the process, there could be a high price to pay publicly.

That alone provides a substantial moat to the company, but the stickiness of the service doesn't end there. Recently, TASER acquired two companies -- Misfit and Dextro -- to create TASER AI. Here's how company founder and CEO Rick Smith describes what AI can do for Evidence.com users:

Our initial focus will be around redaction in video...[a] time-consuming process for officers... We have been able to reduce the time it takes to redact one hour of video in half, from eight hours...to four hours. We expect to reduce that time from four hours, down to just 90 minutes by the end of this year with our new AI team and capabilities... And within the next five years, we believe that number could drop to zero as AI does all of the work without requiring any human interaction.

The proof is right in front of us

That kind of time-saving is a huge deal. Police departments are willing to pay up for it. But don't take my word for it: 35 police departments of the 68 major metropolitan areas in the United States use Axon cameras or Evidence.com, including Chicago, Los Angeles, Philadelphia and Washington, D.C.

Data source: SEC filings. Note that revenue for Axon products and service are in millions.

It's worth noting that while revenue shown above is for the last three years, the last tab -- seats booked on the Evidence.com platform -- is reported quarterly. In other words, just 48 months ago, there were 27,000 registered users for Evidence.com. Today, that figure stands at 132,000 -- representing a growth rate of 120% per year.

I haven't even touched on some of the other important factors I look for in an investment. For instance, TASER is a founder-led company. It also has a very clear vision, and excellent employee reviews on Glassdoor.com. Throw in there the fact that the company is not only building a moat around this new business segment, but has also demonstrated the optionality that comes with its mission of protecting life and the truth, and I'm willing to put (even more) skin in this game.