Bank of America (NYSE:BAC) has laid out a number of goals that it's striving to meet, but the most important is its profitability target of a 12% return on tangible common equity. The $2.2 trillion bank is still a meaningful distance from this goal, but there's reason to believe that it could reach it (on an annualized basis) by the end of this year.

At that level, Bank of America would be earning its cost of capital, which I estimate to be 11.7%, and thus creating value for shareholders after factoring in the opportunity cost of not investing their money elsewhere.

It's also an important target because Bank of America has to continue improving before it meets it. The North Carolina-based bank's return on tangible common equity last year was only 9.54%. That equates to a net income applicable to common shareholders of $16.2 billion.

For Bank of America to meet its top profitability target, by contrast, it'll have to earn $20.5 billion. That's $4.3 billion more than the bank earned last year. 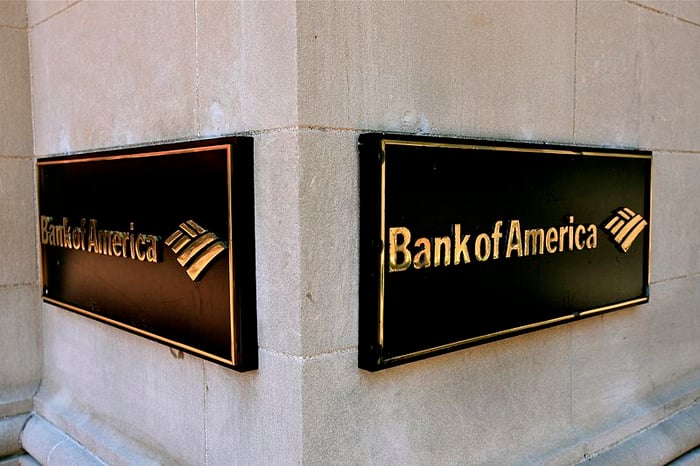 Interest rates should help Bank of America close the gap between its actual and targeted profitability. It will already generate $600 million more each quarter in net interest income this year because of the interest rate increases that came in the fourth quarter of last year. Excluding taxes, that should translate into approximately $1.7 billion in added annual income.

Rates are expected to head higher this year as well, which should narrow the gap even more. The Federal Reserve has telegraphed its intent to boost rates by 75 basis points in 2017. If you compare that to the $3.4 billion worth of extra net interest income Bank of America expects to earn if rates climb by 100 basis points, then this could easily boost its bottom line by $1.8 billion on an annualized basis -- calculated by taking 75% of $3.4 billion and then subtracting 30% of the product to account for taxes.

If you add these two figures together, they close Bank of America's profitability gap considerably. Holding all else equal, and assuming that rates rise by the full 75 basis points this year, then it would end 2017 only $800 million or so short of its annualized profitability target.

It's worth keeping in mind, as well, that Bank of America isn't only focused on the top line when it comes to meeting its objectives. It's also continuing to cut expenses.

Last year, CEO Brian Moynihan announced a plan to trim its annual expense base an additional $3 billion by the end of 2018 -- that's on top of roughly $15 billion in annualized cuts since 2011. By the end of this year, it thus seems reasonable to conclude that Bank of America could lop another $1 billion off its annualized expense base -- or roughly $200 million more than it would need after higher rates are factored into the equation to fully close the gap between its actual and targeted profitability.

Thus, Bank of America could very well meet its target of a 12% return on tangible common equity on an annualized basis by the end of 2017. That would be an enormous accomplishment for the bank, given that it would be the first time since the crisis that it earned its cost of capital.

Will Bank of America Finally Meet This Performance Target in 2017? @themotleyfool #stocks $BAC Next Article
Current