In the course of writing about Bank of America (NYSE:BAC) over the last few years, I've found myself frequently referencing a concept that is both esoteric and important. I'm referring to the cost of capital. This is the rate of return on a stock that's required to attract investors.

You're not going to buy a stock if you expect it to return 1% each year. Why would you do that when you could invest in a 10-year Treasury note issued by the federal government that carries no risk and yields 2.4%? That's a rhetorical question, because few investors would do such a thing.

None of this is controversial. But what is controversial is determining precisely what a particular stock's return needs to be in order to attract as opposed to repel investors. It's this mystical return that's referred to as the cost of capital, or even more specifically the cost of equity.

This concept is especially important right now in the bank industry, which has seen returns plummet in the wake of the financial crisis. Between low interest rates, stiff regulations, a lackluster global economy, and high compliance costs, banks are much less profitable than they were a decade ago. In 2006, Bank of America's return on equity was 16%. By 2016 it had dropped to around 7% -- if you exclude preferred stock and intangible assets, the figure last year was 9.5%. 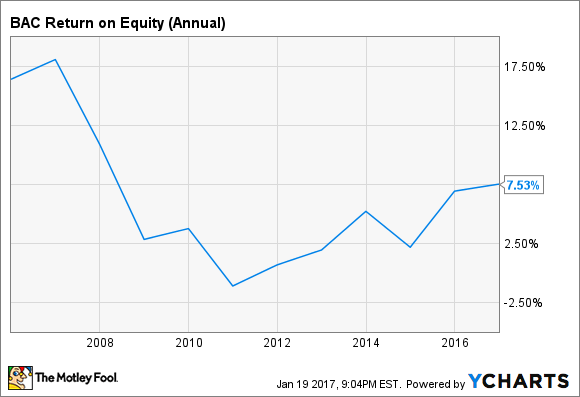 Bank of America's cost of capital

This begs an important question for current and prospective investors in Bank of America: Given the drop in its profitability, is the North Carolina-based bank still earning its cost of capital?

It's important to be clear that Moynihan wasn't referring to Bank of America's overall return, just to each of its four operating segments. These generated returns on average allocated capital of between 10% on the low end and 21% on the high end last year. Critically, however, Moynihan left out the bank's All Other segment, which handles administrative and risk-related tasks. This unit lost money last year -- $1.6 billion to be precise. What this implies is that Bank of America believes its cost of capital is less than 10%. It has to be or else Moynihan lied on the last conference call. He could have, of course, but I doubt it. As someone who's followed Bank of America closely for most of Moynihan's tenure as CEO, I can tell you that he doesn't come across as the type of person that would do that. And if he did, I doubt that someone as sophisticated as Warren Buffett would say the nice things about Moynihan that he has over the last few years.

My point is that there's a discrepancy between what Bank of America and analysts estimate its cost of capital to be. Is it 12% like Bove believes? Or is it around 10% like Bank of America claims?

To answer this, let's just calculate Bank of America's cost of capital for ourselves. Here's the formula to do so:

And here it is after plugging in the numbers:

This doesn't mean that Bank of America is being dishonest, because there is room to honestly manipulate this figure. For example, it depends on what you consider to be the risk-free rate of return. I define it as the current yield on the 10-year Treasury note, as I said above. But you could just as well define it as the yield on 3-month Treasury bill, which is lower.

Which of these you use depends on what type of investor you are. If you're a long-term investor, as we tend to be at The Motley Fool, then you'd want to go with the 10-year note. But if you're a trader, the 3-month T-bill is appropriate.

Or you could disagree about the long-run rate of return on stocks. I estimate it to be around 9.5% going back to 1928 based on data from the NYU Stern School of Business. But depending on the timeframe, this could be lower or higher.

What Is Bank of America's Cost of Capital? @themotleyfool #stocks $BAC Next Article
Current