Please ensure Javascript is enabled for purposes of website accessibility
Free Article Join Over 1 Million Premium Members And Get More In-Depth Stock Guidance and Research
By Andrew Tonner - Mar 6, 2017 at 11:23AM

AT&T and Comcast earn top marks among cable stocks by boldly positioning themselves to profit ahead of the industry's ongoing shifts.

The rise of the internet, social media, and digital streaming services were each touted, at one point or another, as the final nail in the cable industry's coffin. Though some disruption has indeed taken place, the death of cable has largely not come to pass quite yet.

Rather, the many of the world's largest cable companies have instead adapted to the new normal, even positioning themselves to thrive by swimming with the currents that are shaping the industry.

This article will focus on two major cable companies -- AT&T ( T 1.78% ) and Comcast ( CMCSA 0.54% ) (NASDAQ: CMCSK) -- that appear particularly well-suited to thrive amid the changing cable industry landscape, though other names, like The Walt Disney Company and Charter Communications, also deserve cable investors' attention. Having said that, let's see what makes AT&T and Comcast two top cable stocks to own today. 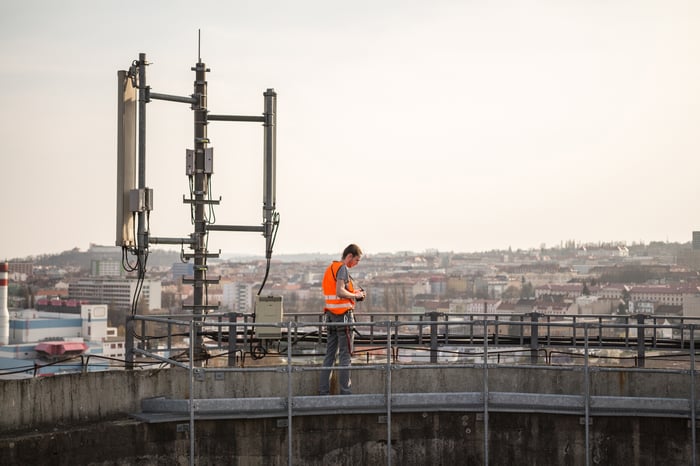 AT&T's inclusion in this discussion rests on one crucial premise, namely that its pending acquisition of TV and movie powerhouse Time Warner ( TWX ) will close as planned and without government interference.

Thankfully, current evidence supports this premise. The Wall Street Journal recently reported that FCC chair Ajit Pai said he does not anticipate the FCC will review the AT&T-Time Warner merger, leaving only a Justice Department review as the lone regulatory hurdle that could potentially jeopardize the buyout; DOJ reviews tend to be more limited in scope and easier to pass than FCC reviews. So, operating under the assumption that AT&T can indeed buy Time Warner, what makes this wireless provider so well positioned to dominate the future of the cable industry?

To borrow the phrase from hockey legend Wayne Gretzky, AT&T is skating where the (cable industry) puck is going by buying Time Warner. 5G wireless standards, which are due for mass-market commercial deployment around the end of the decade, will allow broadband-quality (or better) wireless streaming directly to mobile devices. This will, in effect, eliminate the need to route cable signals through a cable box, which is largely the industry standard today. Instead, anyone with a 5G wireless device will be able to stream content anywhere, which will completely change the power dynamics across the cable industry.

AT&T and its CEO Randall Stephenson are presciently preparing the company for this shift by securing important content assets. Time Warner owns basic cable stalwarts like CNN, TBS, and TNT. It also owns HBO and Warner Brothers Studios. Not to get into the weeds too much, but content ownership matters, because it provides leverage in negotiating cable bundles with other content companies.

All of this is to say that AT&T is positioning itself for a future in which cable distribution flows through your mobile devices. Creating a one-stop shop where consumers can bundle their wireless services and cable packages should provide a powerful value proposition to consumers at a time when no other major wireless player has plans in place, for a number of reasons, to pursue a similar strategy. Assuming its Time Warner merger closes, AT&T is positioning itself to enjoy arguably the strongest competitive position among cable distributors and wireless providers in the years to come.

Comcast is presently the only other major cable or wireless provider to announce a strategy similar to AT&T's vision of a future in which wireless cable distribution is the norm, which earns it the second spot in this analysis, largely for the same reasons.

For context, Comcast is in many ways the cable distribution industry equivalent of AT&T. It is one of the largest cable distributors by subscribers, and it enjoys the vision and financial resources to capitalize on the industry's shifting dynamics. Comcast's business is largely organized around two main segments -- its cable distribution network and its NBCUniversal content arm. Its cable, high-speed internet, and voice phone service counts 56.4 million subscribers across the U.S. NBCUniversal controls TV networks including NBC, USA, E!, Bravo, CNBC, and many more. It also owns film studios Universal Pictures, DreamWorks Animation, and others.

The company is vertically integrated from content creation to cable distribution. To prepare for the future, though, Comcast plans to launch its own mobile network at some point in 2017 by licensing spectrum rights from other owners of spectrum rights. Barring execution risk, this should put Comcast on an even playing field with AT&T as the only two cable or wireless companies with the ability to create bundled cable services that can be distributed via mobile devices.

Importantly, Comcast's ability to maintain this mobile distribution strategy will rely on its ability to continue its spectrum-use licenses from other mobile operators, or its ability to eventually purchase its own spectrum. In this vein, Comcast is currently participating in the ongoing FCC spectrum auction; the company has already placed a $1.8 billion deposit on future spectrum rights, although the exact frequency rights it will secure remains in flux.

Without belaboring the point, Comcast and AT&T earn the title of top cable stocks by virtue of their efforts to usher in a new era in the cable business. Others will assuredly follow suit. As the first-movers in this trend that also control assets on the content and mobile distribution sides of the industry, both companies are virtual locks to remain key players in the lucrative industry for years to come.