Spirit Airlines (NYSE:SAVE) reported its fourth-quarter and full-year 2016 results in February, with the airline making some much-needed improvements in reliability and customer service while noting that its competitors are intensifying efforts to compete with Spirit on price. How will the company fare in an environment where the likes of United Continental and Delta Air Lines are rolling out "Basic Economy" fares that target Spirit's core price-sensitive customer? For clues, let's look at how Spirit has performed over the last five years. 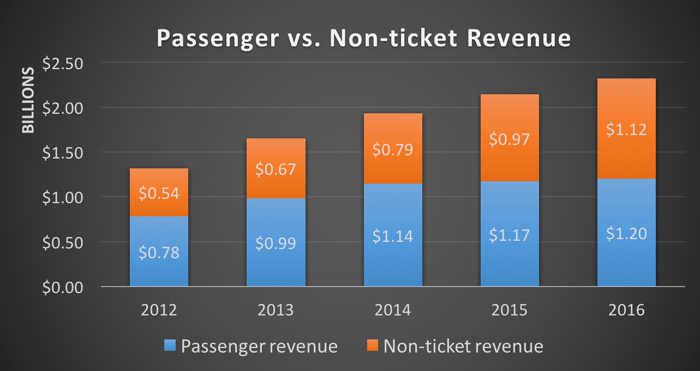 Looking at Spirit's total revenue numbers, the top line has grown nicely each year, from about $1.31 billion in 2012 to $2.32 billion in 2016, a 15% compound annual growth rate. However, this obscures the fact that the largest driver of that growth has been nonticket revenue, which comes from the fees Spirit collects for things like baggage, itinerary changes, and advance seat selection. Over the same time period, nonticket revenue has grown from 40.6% of total revenue to 48.3%. As nonticket revenue becomes a larger and larger portion of total revenue, it should help provide a buffer during times when Spirit is forced to keep fares lower because of competitive pressure.

Yields should be stabilizing soon 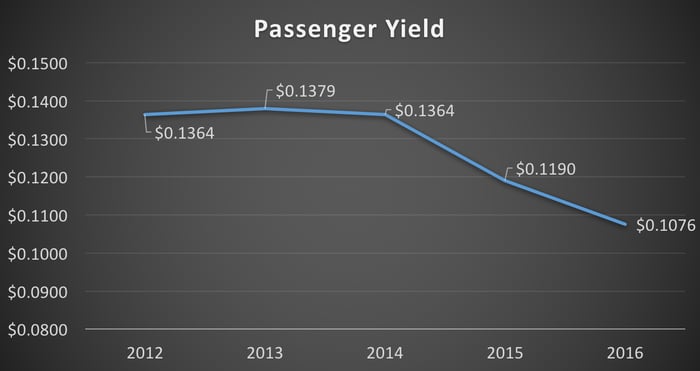 Passenger yield is the average fare paid per mile, per passenger, which obviously has a huge impact on Spirit's top line. From 2012 to 2014, Spirit's passenger yield remained relatively stable, between 13.6 and 13.8 cents. However, 2015 and 2016 were a much different story: A competitive pricing environment depressed fares in many of Spirit's key markets, which resulted in yields falling dramatically -- to 10.76 cents in 2016.

Due to steady capacity growth, Spirit has been able to maintain healthy top-line growth in spite of falling yields. However, that headwind appears to be abating a bit. In the fourth quarter of 2016, while yields were still down 1.9% year over year, the rate of decline appears to have slowed dramatically -- a sign that yields are perhaps reaching a bottom. 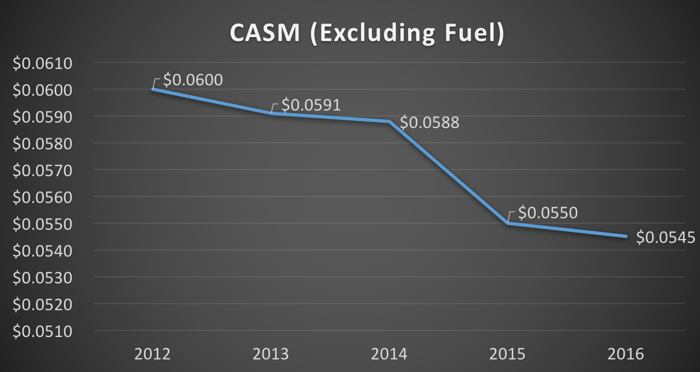 Nothing is as key to Spirit's business model as its ability to keep its unit costs low. Over time, the best measure of this is cost per available seat mile (CASM), excluding fuel. (Obviously, fuel is a key cost for any airline, but since Spirit has no control over this, it's more helpful to look at the ex-fuel number.)

On this measure, the company has managed its way through the last several years exceptionally well, with CASM (ex-fuel) decreasing every year, from 6.0 cents in 2012 to 5.45 cents in 2016. This is partly due to scale -- with the airline increasing its available seat miles each year (the denominator in the CASM equation), this number should naturally drift lower. But the company's approach to cutting or removing unnecessary costs at every opportunity deserves a lot of credit as well. Spirit has noted that it expects its CASM, ex-fuel, to decline again by up to 1% in 2017.

Healthy margins over many years 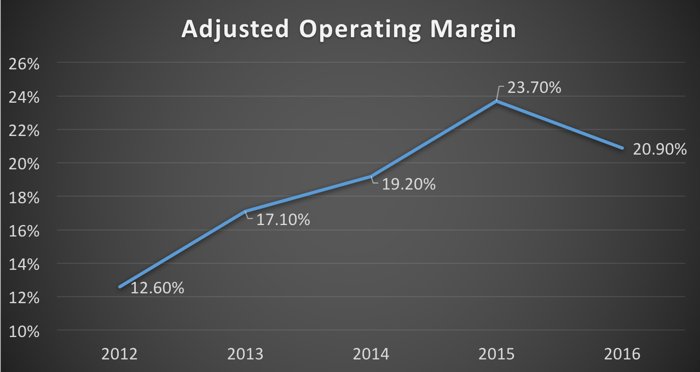 Thanks to its focus on reining in costs, Spirit's margins have historically been among the best in the industry. And with the company's revenue growing faster than expenses, adjusted operating margin has risen from 12.6% in 2012 to more than 20% for 2015 and 2016. Spirit has noted that due to rising labor and maintenance costs, as well as increased competition for its budget-minded customers, margins will likely be under pressure for some time. However, the company's stated goal is to continue to seek out new routes where it can earn an operating margin "in the mid-teens or higher."

Net income is set to expand 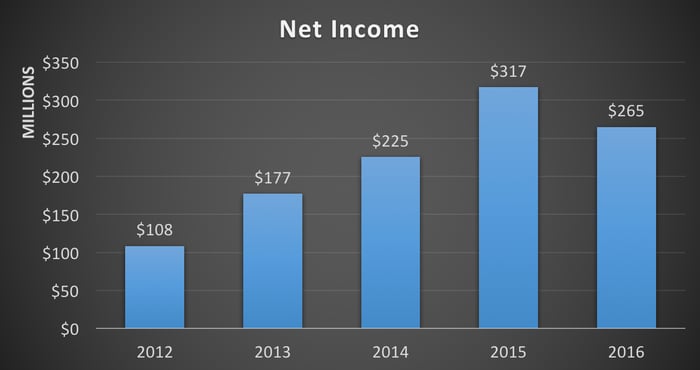 Put it all together and Spirit's bottom line has been expanding nicely over the last several years, growing from $108 million in 2012 to $265 million in 2016 -- a 25% compound annual growth rate, even given the step backward in 2016. Last year, higher expenses and lower unit revenue caused net income to retreat from 2015's record levels. However, with the company forecasting unit revenue to return to growth later this year, net income should rebound as long as margins remain strong.

With the company announcing its intent to grow capacity by 18.5% in 2017, unit costs expected to decrease over the long term, and margins expected to remain in the mid-teens or above, I believe the future for Spirit is likely to look a lot like the past. Despite the challenges of increased competition and pressure on fares, the company's low-cost business model should help it continue to thrive in the years ahead.