Shares of Staples, Inc. (NASDAQ:SPLS) rose as much as 7% during the trading day today before dropping back to hover around a rise of 4%. This erased the losses the company and its stock faced Thursday, after its fourth-quarter and full-year earnings were released amid headlines that the office-supply company is dying at the hands of Amazon.com (NASDAQ:AMZN).

Staples reported that sales dropped 3% year over year for the fourth quarter, a product of same-store sales being down 1% and some stores closing throughout the year. The company reported a loss of $615 million, or $0.94 per share, compared with positive earnings of $86 million in Q4 2015. 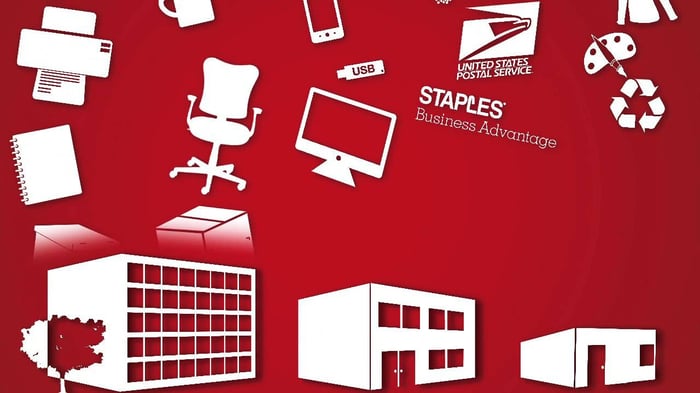 The stock's dip yesterday made sense, as those numbers were pretty discouraging. Still, after the initial shock, it seems that the market today is giving the company its former valuation back, as the results were still relatively in line with what most analysts were expecting. Additionally, the company is still maintaining its $0.12 dividend, for a yield of about 5.4%, which may be encouraging for those helping to lift the stock today.

Staples stock is now essentially flat for the week thanks to today's slight rebound, but it's still been cut nearly in half over the last two years; it does seem to be struggling to maintain its market value and relevancy in a climate where standard office supplies are so easily and cheaply purchased on Amazon.

Staples management believes the company can compete on pricing and availability, and differentiate on customer service and expertise. On the earnings conference call, when an analyst asked about Amazon winning a major supply contract from Staples, CEO Shira Goodman responded by saying:

Obviously we take all of our competitors very, very seriously, including Amazon. That is why our strategy focused on the midmarket is all about really understanding the segment of customers who have these unique needs, and how do those needs fit with our capabilities. Obviously our pricing, our assortment, and our delivery capabilities are as competitive as can be and actually lead the pack in many situations. And then the differentiation with expertise and services.

Staples plans to close another 70 stores in 2017, and continue restructuring its business, so we'll wait to see if the company really can begin winning back customers with the competitive strengths Goodman talked about.

In the meantime, the company continues to face a reality of widening losses and expected lower cash flow in 2017 versus 2016, which could threaten its very high dividend. If that gets cut, it would likely decimate the stock price further as income investors flee.