Justin Loiseau
(TMFJLo)
Author Bio
Keeping investors up to date on driverless cars, all things Musk, and good companies doing good things. Follow @TMFJLo
The year 2017 is gearing up to be a momentous year for the driverless car race. But despite major initiatives by megacorporations Alphabet (NASDAQ:GOOG) (NASDAQ:GOOGL), Tesla Motors (NASDAQ:TSLA), and others, there are major road blocks ahead for the driverless car revolution. A recent McKinsey report highlights five of them.

No matter how incredible an innovation might be, it's useless if it's not affordable. Although Alphabet's Waymo has clocked more than 2 million road miles in its autonomous vehicles, McKinsey estimates that self-driving cars are "unlikely to be available before 2020." Alphabet and others are inching closer to commercializing their products. A partnership with Fiat Chrysler Automobiles NV (NYSE:FCAU) will, for the first time, take Alphabet's autonomous driving technology out of its peculiar "panda car" and into 100 Pacifica Hybrid minivans in early 2017. But those minivans aren't for sale, and, if they were, would probably cost magnitudes more than an average minivan.

Even if driverless cars become affordable, no one will buy them if they don't understand them. That means that self-driving car companies need to educate consumers on the advantages of autonomous vehicles. Informational videos like the one above produced by Alphabet's Waymo are an important start, and others like Tesla Motors are producing their own video vignettes to make self-driving cars salient. Tesla Motors and others have a clear business incentive to make self-driving seem mainstream, and the more that their message is spread, the brighter the future for their sales and sustainability.

Consumer understanding goes hand in hand with a major concern about autonomous technology -- safety and security. At no point was this clearer than in May 2016, when Tesla Motors reported the first driver fatality while its Autopilot technology was engaged. The tragic crash occurred when neither the driver nor Tesla Motors' technology recognized a truck's white-colored trailer crossing its path on a highway. There will certainly be more tragedies in the future of autonomous vehicles, and it will remain a continuing challenge and the highest priority for self-driving car companies to minimize safety and security issues. However, it's also important to remember that these high-profile cases can cause over-reactions, and sticking to statistics can help investors, companies, and consumers alike identify the best autonomous option for investing, manufacturing, and purchasing.

As with all new innovations, regulation and technology can make or break a revolution. The McKinsey report is quick to note that regulation is a hurdle, rather than a never-ending issue. It makes sense, then, that Ford, Alphabet, Lyft, Uber, and Volvo Cars have all joined together to create the "Self-Driving Coalition for Safer Streets." Rather than rally for "wild west" free market competition, these companies want to see a sensible framework of standardized regulation upon which they can confidently build their new business units.

Technology isn't a hurdle, but there is a minimum threshold below which driverless cars will never be the norm. Companies like Alphabet's Waymo and Tesla Motors are aiming for full autonomy, while others are taking the more step-wise approach of offering semi-autonomous additions like Audi's "Traffic Jam Assist." The McKinsey report estimates that, once regulation and technology issues have been resolved, "up to 15 percent of new cars sold in 2030 could be fully autonomous." 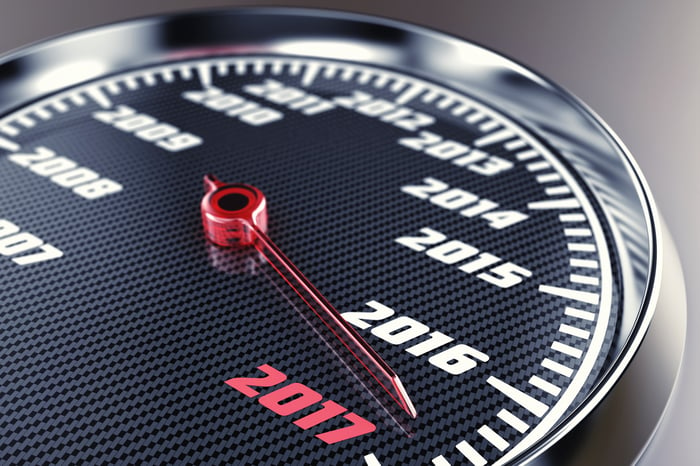 2017 will not be the year self-driving cars take over our roads. Pricing, consumer understanding, safety/security, regulation, and technology issues will continue to impede this industry's revolution. But Alphabet, Tesla Motors, and others are making steady gains on addressing these issues, and the ultimate widespread adoption of autonomous technology is almost inarguable. Forward-looking investors with long-term horizons should acknowledge these issues, select their self-driving stocks accordingly, and sit back to enjoy this multi-year market road trip.