We're finally getting confirmation about what a great year 2016 was for the solar industry, even though most investors are focusing on the decline of the industry in 2017. But there were some bright spots for solar energy that companies can build on not only this year but in the future, which emerged in a report that came out this week.

The other trend of the week was the reality that many solar companies will likely fail in 2017. Some got their business model wrong, some took on too much debt, and others will succumb to the declining market. Let's dive into the week's news. 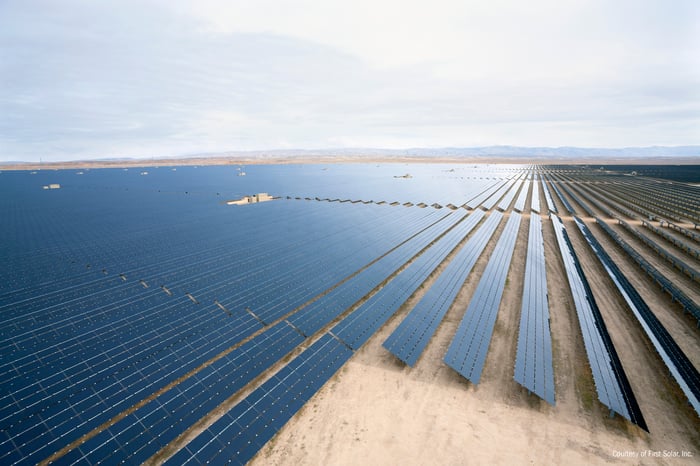 A record year for solar energy

The Solar Energy Industries Association and GTM Research released their Solar Market Insight Report 2016 Year in Review this week. And it shows a 97% increase in solar installations in the U.S. in 2016 to 14,762 MW.

Residential solar installations were up just 19% from a year ago to 2,583 MW and nonresidential, or commercial, installations were up 49% to 1,586 MW. But utility projects were the rock star, rising 148% to 10,593 MW on the year. First Solar (NASDAQ:FSLR) was the most notable installer, building three of the five biggest projects last year.

While 2016 was an incredible year for solar, the next few years might not be. Installations are expected to fall about 10% in 2017 and decline again in 2018, primarily due to a lack of utility demand. But residential and nonresidential solar markets are expected to grow slowly but surely in the coming years. Investors should keep these long-term trends in mind as they look at solar stocks, because companies that can take advantage of the broad trends will set themselves up for long-term success.

It might seem crazy, but as the residential solar industry grows, some of its largest players are dying off. This week, Greentech Media reported that Sungevity laid off two-thirds of its employees, and it appears the company will soon be bankrupt and sold off for parts.

Sungevity was supposed to be a capital-light business that would provide valuable services to installers and end customers without "owning the trucks." But the company never got the scale it needed to turn its platform into a profitable business. Now, the best hope is probably that its technology lives on at another company.

With NRG getting out of home solar, Sungevity shutting down, and SolarCity even scaling back, we're seeing the end of the national solar company model. In the future, we can expect companies like SunPower (NASDAQ:SPWR) to provide equipment and some services to local installers because it has a differentiated panel to offer. And the supplier market will likely consolidate around a few big brand names that can provide equipment and services these small installers need. Sungevity just didn't fit that bill.

Here are a few more notable news items this week:

Yingli Green Energy, which was once the largest solar manufacturer in the world, has formed a special committee of board members to "consider potential resolutions of debt repayment issues." In other words, the company isn't bankrupt yet, but it's close. The fall of Yingli Green Energy is a warning to all solar manufacturers about the risks of growing too quickly with too much debt. That strategy hasn't traditionally played out well.

New York has approved a new rate structure that will replace net metering with a plan that values distributed energy resources based on what's called a value stack. This will pay customers for electricity they export to the grid based on a location, when energy is exported, what the capacity is worth to the grid, the demand reduction value, and environmental value. This is an acknowledgement that distributed resources have unique value, and that they have different value depending on when and where they're deployed. It's also similar to a proposal that SunPower and SolarCity made to the state and could allow energy storage to start becoming economical when combined with the use of solar power systems.

Finally, France awarded its first 500 MW tender this week at an average price of $0.07 per kWh, the first of six tenders that will take place every six months. There was also a 20 MW tender for self-consumption -- the production of energy that a customer will both produce and consume themselves potentially with energy storage -- something that will likely help drive solar plus storage adoption in the future.