This Chinese company is closing in on Apple's market share. 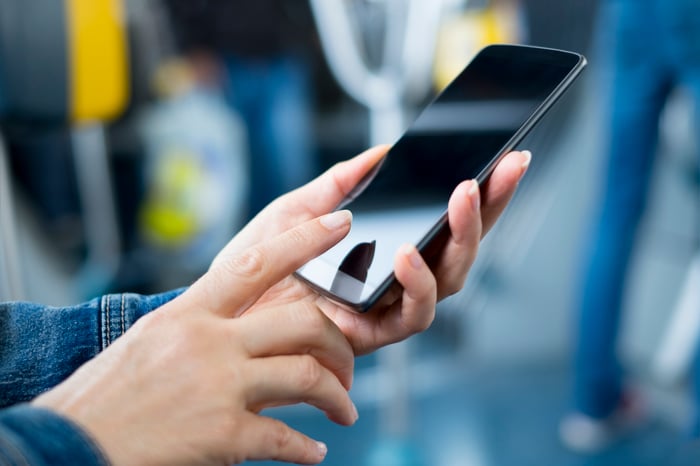 Huawei's ambition of becoming the second-largest smartphone company in the world received a shot in the arm in 2016, as its smartphone sales increased close to 27% from the year before. In stark contrast, both Apple's and Samsung's shipments fell 4.3% over the same period, according to Gartner. The strong growth in shipments gave Huawei 8.9% of the smartphone market in 2016 compared to 7.3% a year ago.

By comparison, the market shares of both Apple and Samsung took a beating. The Cupertino-based smartphone giant's share of the market fell by 1.5 percentage points to 14.4%, while Samsung's market share fell by two percentage points to 20.5%. Huawei, however, has managed to consistently increase its smartphone shipments, leading to market-share gains: 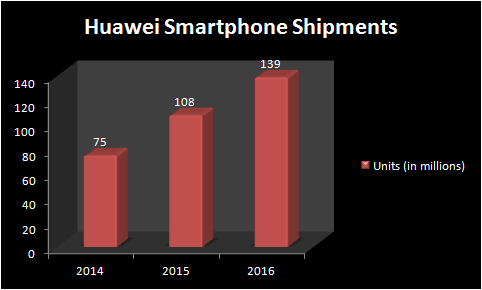 Having already occupied the third place in the smartphone race, the Chinese vendor will now go all out to achieve its lofty ambitions. In November 2016, the chief executive of Huawei's consumer business group told Reuters that it wants to become the second-largest smartphone company in two years. But will it be able to meet this aggressive target?

China and India will be tailwinds for Huawei

The Chinese company has been seeking growth in its home market. Last year, Huawei shipped 76.6 million phones in China and sat in the second place with a market share of 16.4%. Meanwhile, Apple's Chinese shipments dropped an alarming 23% to 44.9 million units, giving it a single-digit market share of just 9.6%.

This means that Huawei has opened a huge gap over Apple in China, as its smartphone shipments there are up almost 22% in 2016. China will be the key to Huawei's global smartphone dominance, since it is the world's biggest smartphone market and accounted for 21% of global shipments last year.

What's more, the growing adoption of LTE connections in China means that smartphone demand in the country will remain strong. GSMA Intelligence forecasts that China will have 1 billion 4G connections by 2020, compared to 762 million at the end of 2016. The increased adoption of 4G means that customers will need to upgrade to smartphones from feature phones as they move away from legacy technologies such as 2G and 3G.

On the other hand, Huawei is also looking to make inroads into the Indian market. Last year, it said that it aims to have 10% of the Indian smartphone market by the end of 2017. In fact, Huawei's Indian consumer operations reports directly to the Chinese headquarters, showing the company recognizes the importance of this market.

This looks like an uphill task since it had just 0.5% of the Indian market in the first half of 2016. But in September 2016, Huawei began its smartphone manufacturing operations in India, and it plans to manufacture 3 million units by the end of 2017. If it is able to convert all these units into sales this year, the company's Indian market share will gain respectability.

By comparison, Apple is yet to get its manufacturing operations in India into full swing. Though its manufacturing partner Wistron has set up a plant in the southern part of the country, it will only produce around 300,000 to 400,000 units of the iPhone SE initially. This is a far cry from Huawei's manufacturing capacity.

The secret behind Huawei's growth

Huawei has a smart formula to win over customers in big smartphone markets -- offline sales. In China, Huawei plans to set up 1,000 stores across all counties, apart from striking partnerships with distributors and retailers. It also plans to deploy 460 service stores in 45 nations.

Meanwhile, Huawei has partnered with more than 50,000 retail outlets in India and is going to set up more than 200 service centers. The company's offline-store strategy for emerging markets is a smart one, allowing it to gain more eyeballs and eventually increase sales.

In fact, offline sales in markets such as India have been the key to the success of Chinese smartphone companies, since customers have been able to touch and feel their phones before buying. And, just 35% of the Indian population had access to the internet last year, which could be another reason that Huawei has been busy opening retail outlets in smaller cities.

Huawei had bumped its global store count by 116% to 35,000 toward the end of May 2016. The company has further strengthened its retail presence as it planned to open another 15,000 stores in 2016 itself. Around half of its stores are on the Chinese mainland and across the rest of Asia, with the next-largest fraction in Europe.

By comparison, Apple has 491 stores spread across the globe, and over half of them are in the U.S. What's more, its store presence in markets such as India and China is negligible compared to Huawei's. Apple reportedly had 40 stores in China by the end of June 2016, when Huawei had over 11,000 stores on the mainland. On the other hand, Apple's plans to open stores in India have been slowed by regulations, though it might open up three of them this year.

Huawei's strong retail presence is complemented by the company's strategy of offering both budget and premium smartphones. The Honor 5C, which some reviewers count among the top budget phones, costs less than $170 in India at current exchange rates, placing it way below the global-average smartphone price of $256.

In fact, Huawei also sells feature phones in emerging markets that cost less than $100. These budget phones help bring customers to its stores and improve brand awareness. The company is now gradually moving into the higher segment of the market by launching more mid-range and premium phones, which should eventually improve the average selling prices of its phones.

A strong retail presence and an extensive product portfolio that covers all segments of the smartphone market have been the catalysts behind Huawei's growth. In fact, the company's two-pronged strategy has put it in the limelight, as the value of its brand grew 28% in 2016 on the back of high-end devices and marketing campaigns.

Apple and Samsung, therefore, have a fierce competitor that looks capable of breaking into the top two in the smartphone market.