Tesla (NASDAQ:TSLA) has an ambitious and compelling vision of vertically integrating sales and service. Hatred of the traditional car buying experience is universal, and service departments at dealerships are major profit centers. But pulling off the execution of that vision is far easier said than done, and requires significant investments in infrastructure as well as talent. No one should ever have to wait nearly eight months to get their car repaired.

Digging through Tesla's SEC filings, there are data points that could suggest that Tesla needs to be investing more aggressively in customer support.

Fair warning: This will be an imperfect analysis, mostly due to imperfect public data. First, I took a look at cumulative vehicle shipments over time, excluding the original Roadster that only sold about 2,500 units. While cumulative unit sales are generally not a great proxy for installed base because some units are inevitably retired over time, Tesla's cumulative unit sales may be closer than other examples since cars tend to have longer useful lives and the company only started shipping the Model S less than five years ago. This isn't a small consumer electronics device that you get rid of after two years. It's not perfect, but it's the closest proxy we can get.

Tesla also reports the total number of sales and service locations that it operates. It would be more useful to distinguish between sales and service, but for reporting purposes the company aggregates all locations. Third-party authorized body shops are not included in these figures, as Tesla does not report how large its network is. Here's a chart of both cumulative unit sales and Tesla stores and service centers over the past five years. However, if you divide cumulative unit sales by Tesla-operated locations, then it starts to make sense why Tesla's support infrastructure is somewhat strained right now. Cumulative units per location rose from 91.5 in 2012 to 693.2 in 2016. 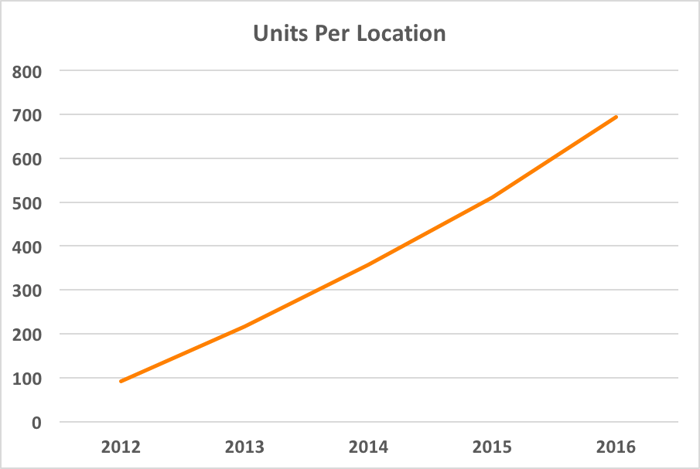 Again, this analysis is less than ideal since investors only have Tesla's public disclosures to work with. It does not account for geographical differences or concentrations, it cannot distinguish between sales and service locations, and the installed base is certainly less than the roughly 184,000 Model S and Model X vehicles that Tesla has delivered through the end of 2016. It's also not as if locations should scale linearly with deliveries. But directionally on average, it stands to reason that Tesla's support infrastructure growth has not kept pace with delivery growth, which in turn leads to backlogs within the network.

It's also worth noting that Tesla measures many other internal metrics to assess service quality -- metrics that public investors are not privy to. For example, head of sales and service Jon McNeill recently noted that 20% of jobs at Tesla's Palo Alto center are completed before the customer can finish a cup of coffee, and that Tesla's overall parts backlog has been reduced by over 80%. These are also important data points, but they aren't the sort that investors get regular updates on.

Model 3 will need even greater support

Meanwhile, Tesla does not break out its capital spending in detail, either, so it's hard to gauge how much the company is investing in support infrastructure. It goes without saying that areas like Gigafactory and Model 3 tooling are the top priorities, but beyond that it's less clear. Here's CFO Jason Wheeler, who recently announced he was leaving Tesla to pursue opportunities in public policy, responding to an analyst question on capital expenditure categories on the last earnings call:

We don't break down, we don't disclose the specifics here, but obviously Gigafactory and Model 3 are going to be the biggest investments. We've also got CapEx investments soon, equipment and tooling related to Model 3. But then also there's going to be a piece in CapEx on building out our service and our retail infrastructure as well. And the Supercharger network. So it is the usual suspects.

Given the looming Model 3 production ramp that remains on track, perhaps Tesla should be allocating more capital expenditures to expanding support infrastructure.