To refresh your memory, here's what he said:

My commitment to you is that, yes, you can, as an investor, count on Intel having a clear manufacturing lead. You have to remember these measurements don't necessarily mean all the same thing and how people are measuring the 10-nanometers versus 14-nanometers is different.

However, a recent disclosure from rival Samsung (NASDAQOTH: SSNLF) seems to suggest that Intel may soon lose its edge in chip manufacturing technology. 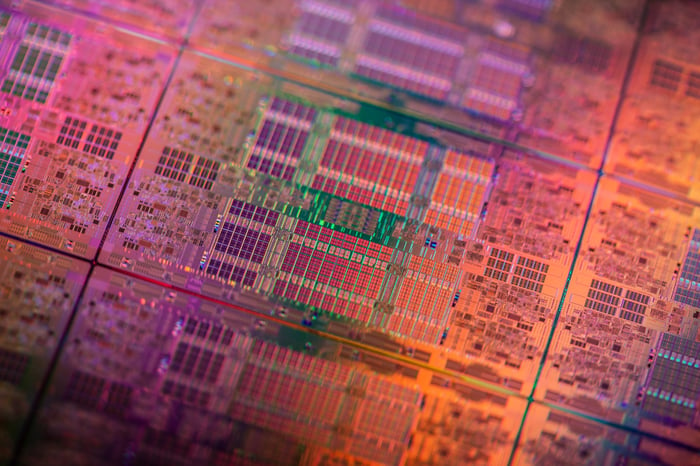 Samsung to ramp Gate-All-Around FETs in 2018

According to an article in DigiTimes, Samsung VP of Technology Ho-Kyu Kang told attendees of the China Semiconductor Technology International Conference (CSTIC) that it will be adopting a fundamentally new transistor structure for its 7-nanometer technology that it expects to be ready for volume production in 2018 called a gate-all-around (GAA) FET.

Those aren't Samsung's words -- they come from a key Intel technologist. Furthermore, from reading the entire article linked above, it seems that getting that technology ready for high-volume production is quite the challenge. Even if Samsung's 7-nano tech using this GAA structure is only ready for mass production by late 2018, that should still put it well ahead of Intel.

Intel has already disclosed that its upcoming 10-nanometer technology -- which it says will begin mass production late in 2017 for 2018 product shipments -- will continue to use the older finFET structure. Moreover, Semiconductor Engineering's sources confirmed back in February what I reported back in September  2016 -- that Intel's 7-nanometer technology, scheduled for high-volume production in 2020, will continue to use the finFET structure.

What this seems to indicate is this: Intel has not only seen its lead with respect to chip manufacturing density erode (right now both Samsung and Taiwan Semiconductor Manufacturing Company (NYSE:TSM) are in mass production on their respective 10-nanometer technologies, both of which are denser than Intel's currently in production 14-nanometer technology), but it may be on the verge of seeing its leadership in transistor technology and materials science disappear as well.

Time for some clarity, Intel

At this point, Intel needs to start providing shareholders with some real answers vis-a-vis chip manufacturing technology. The company avoided going into detail about this at its Feb. 9 investor meeting, but it has promised to host a separate day dedicated to manufacturing technology at some point in the first half of this year.

Intel needs to make a compelling -- and intellectually honest -- case for why it believes it has a "leadership" position in manufacturing technology because right now things don't look good on its manufacturing front at all.