One of the strongest trends in advertising is the shift of budgets from television to digital as people spend less time watching conventional TV. Consumers are spending much more time on social media sites like Facebook (NASDAQ:FB), Twitter (NYSE:TWTR), Snap's (NYSE:SNAP) Snapchat, and YouTube -- the subsidiary of Google, an Alphabet (NASDAQ:GOOG) (NASDAQ:GOOGL) company.

But if advertisers are going to replace television ads with digital ads, they'd prefer to buy them the same way they buy those old TV commercials. Twitter is happy to oblige. The company started offering guaranteed views for pre-roll video ads, and it's also letting marketers decide what content its ads run against, according to a report from AdAge.

Back in July, former COO Adam Bain described Twitter's ability to attract television ad spend as a huge opportunity for the company. With Twitter's revenue expected to fall this year, Twitter needs to do everything it can to attract those budgets. 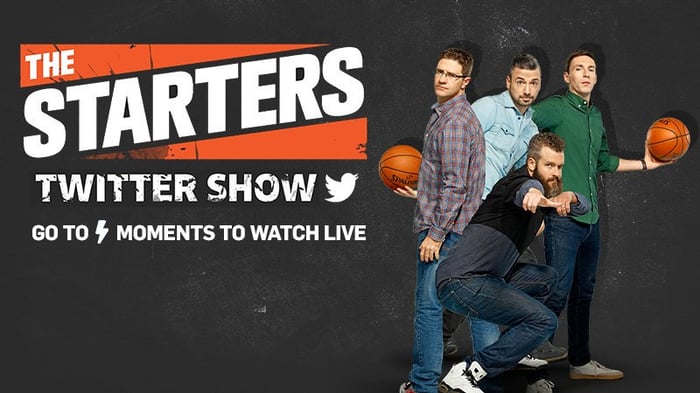 "The Starters" is Twitter's first live show created as part of its deal with the NBA. Image source: Twitter.

A bigger focus on video ads

Last month, Twitter decided to reassess its direct response, promoted tweets, and TellApart products, and focus more intently on video ads. That's where Twitter sees the potential for its highest return on investment after slashing its marketing and sales personnel by 9% last fall.

The company has been growing the amount of video on its platform by integrating Periscope, partnering with major media companies, and shifting to an algorithmic-based timeline so it can push more videos into users' feeds. In the fourth quarter, Twitter streamed more than 600 hours of live premium video from content partners, attracting 31 million unique viewers. Deals with the NFL, NBA, Bloomberg, and others has opened up a lot of high-quality video ad inventory similar to television.

By offering guarantees on marketers hitting their target audiences, Twitter should be able to attract more TV ad budgets. Television networks also offer guarantees, and use extremely popular events to make good on them if they fail to hit the mark with the original ad run. Twitter has the advantage of more advanced targeting capabilities than television, which should enable it to dynamically insert ads based on users' profiles, and more easily make good on those guarantees.

Twitter isn't the only company competing for television ad budgets. Snap explicitly talks about the decline in television viewership among millennials, its primary demographic, as a massive opportunity for it to capitalize upon. Snapchat has several ad formats, and it's currently focusing on increasing the number of video ads it can show in users' stories, publisher's stories, and live stories.

Meanwhile, Facebook is going after the television ad market by developing more video features on both its flagship app and Instagram. Facebook now has a dedicated video section within the app, and the company is seeding it with high-quality content. It's been testing mid-roll ads to grab more ad revenue as it faces saturation of its regular newsfeed ads.

YouTube has been one of the biggest beneficiaries of shifting ad budgets, and now it's looking to prove its worth with literal TV ads. The impending launch of YouTube TV will provide a few ad slots per hour for YouTube to fill in its over-the-top streaming TV service. If YouTube can prove results better than regular television commercials, it may attract more ad spend to its main platform, as well.

With a growing number of options for marketers to buy high-quality digital video ads, Twitter has to do what it can to stand out from the crowd. It's notably outsized by both Facebook and YouTube, and Snapchat boasts much better engagement and the demographics marketers look for.

Offering guarantees, and more say on what kind of content ads are paired with, is a good start, but those offers are easily replicated. YouTube, for example, already offers the option to buy into Google Preferred, which lets advertisers select specific packages of the most popular YouTube channels. If the guarantees make a big difference in buying trends, don't expect Twitter's victory to last long, as Google and Facebook quickly jump on board with their own guarantees.