For several years running, the largest end customer for Ambarella (NASDAQ:AMBA) SoCs has been GoPro. However, it was recently revealed that the action camera maker is moving in another direction and will rely less on Ambarella beginning in the second half of 2017.

Ambarella's relationship with GoPro has always been a double-edged sword for the company. When GoPro was still dominating the action cam space, Ambarella rode the wave of investor enthusiasm to its all-time high of $125 per share in July 2015. But then, as GoPro stumbled and reduced its chip orders, Ambarella shares followed suit. 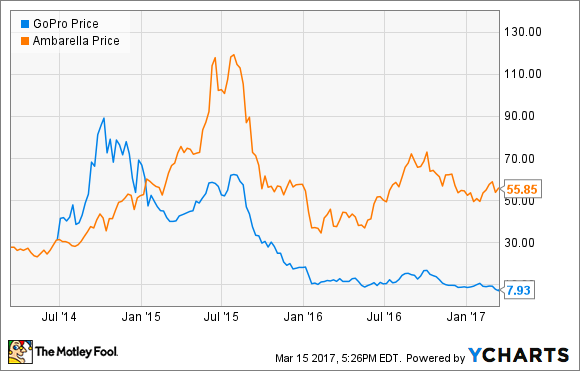 During Ambarella's latest earnings call, investors were greeted with more bad news as management announced that revenue from GoPro would fall to less than 6% in 2017 as its onetime largest customer had come up with a replacement solution for Ambarella's camera SoC that would begin shipping in the second half of 2017.

Will the new GoPro solution be a major threat?

According to the investor call, management did not appear concerned that other customers would similarly be switching from Ambarella's offerings to GoPro's new replacement product. Analysts believe GoPro is transitioning to a custom ASIC, or application specific integrated circuit. This product was designed specifically for GoPro and remains unavailable to other companies.

How do things look without GoPro?

With the news, Ambarella issued disappointing guidance for the current fiscal year. Gross margins are expected to decline four percentage points to 62%, while overall revenue comes in relatively flat for the year. Additionally, the company sees gross margin sliding as low as 59% in future years as the business mix changes.

Just like a baseball team may have to rebuild for a season or two when its seasoned players retire and a crop of new rookies take the field, Ambarella must do the same as its largest customer walks away. On the bright side, the company continues to hold patented technologies that give its SoC offerings a competitive advantage in the market. Ambarella also has $405 million in cash and marketable securities with no long-term debt.

The company will be sampling its new CV1 computer vision SoC mid-year to key customers in the IP security and drone markets. Additionally, it plans to expand its auto OEM business beyond the agreements it has already made with Nissan, Toyota, and Mercedes.

Management has clearly stated that it will produce little revenue from the CV1 product until next year as it takes time for customers to design around a new chip and ramp up production. However, the potential for this computer vision product in automobiles, drones, and more will be critical to Ambarella's ultimate growth prospects. I am comfortable with the direction the company is taking and willing to let the story play out in light of the company's prior success, even without the ongoing support of GoPro.

All in all, shareholders will need to be patient during this transformative period.