Please ensure Javascript is enabled for purposes of website accessibility
Log In Help Join The Motley Fool
Free Article Join Over 1 Million Premium Members And Get More In-Depth Stock Guidance and Research
By Bradley Seth McNew - Mar 16, 2017 at 7:00AM

Will delivering more "margarita moments to female drinkers" give Anheuser-Busch InBev the boost it needs?

Anheuser-Busch InBev NV (BUD 2.37%), the largest alcoholic-beverage maker in the world (and perhaps best known as the maker of Budweiser), says that it wants to "deliver more margarita moments to female drinkers." That's the goal of its recent Lime-A-Rita brand makeover with an entire line of drinks, as well as pop-art-inspired packaging and marketing, that the company is targeting explicitly toward women.

"By women, for women"

"Lime-A-Rita has seen steady growth in its popularity among women since its introduction in 2012, with females currently representing 65% of our consumer base," the senior director for Lime-A-Rita, Selena Kalvaria, told The Motley Fool in an email. "With the knowledge that females influence 85% of household buying decisions and currently make up over half of the U.S. population, we saw an opportunity to grow our existing relationship with women in this year's campaign." 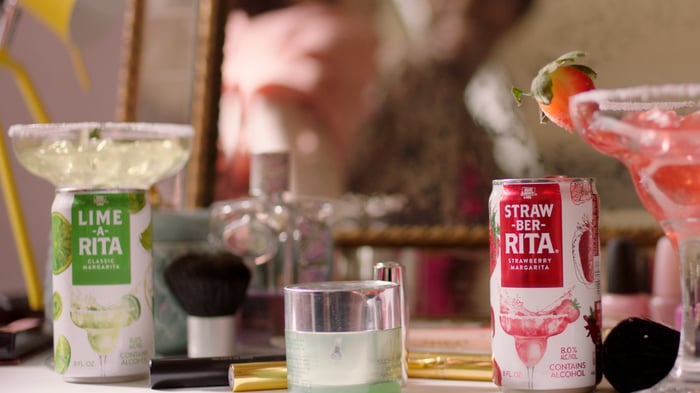 Anheuser-Busch says this will be the first time that one of its U.S. brands will market exclusively to women, and that it's being led by a team of "female marketers, agency partners, and brewmasters.". Other than the new flavors (including grape a seasonally available peach) and packaging, the brand has created a series of new ads, directed by Tricia Brock (who has worked on popular shows such as Girls and Orange is the New Black), which show scenes of groups of women having a good time -- and of course drinking Lime-A-Ritas.

How Anheuser-Busch looks to spur growth

The new Lime-A-Rita drinks are in stores nationwide starting this week. Talking about how this new line and focus give the company a competitive advantage, Kalvaria said:

Lime-A-Rita gives Anheuser-Busch a unique opportunity to step beyond the beer category and compete with wine and spirits by providing a convenient alternative to the traditional margarita. While we are still in early stages of our launch, we have already seen a great response from female drinkers in testing, and are confident women will connect with the campaign and the brand's colorful new look. 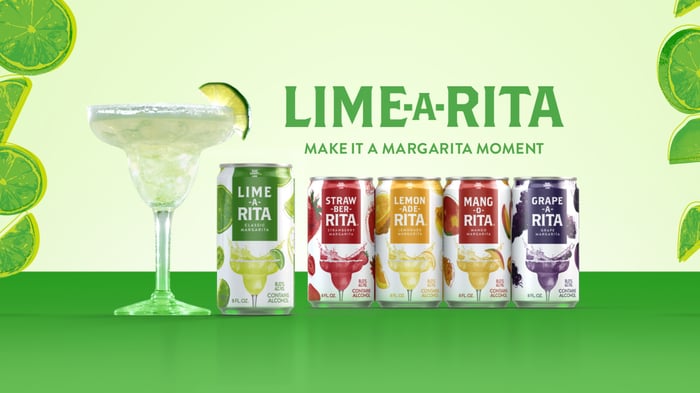 Anheuser-Busch could use the boost after a rough year. For full-year 2016, the company reported that revenue was up 2.4%, even though organic volume dropped 2%. However, earnings per share surprised Wall Street with an 86% decline year over year, down to $0.72 per share. The company blamed much of the miss on weakness in Brazil, one of its key markets. Anheuser merged with SABMiller last year in a $107 billion acquisition; the company said that to help with the earnings pressure going forward, it plans to speed up cost efficiencies related to the merger, and will forgo bonuses to top executives.

It isn't the only beer company facing hardships now, and in fact, it's still growing faster than its largest competitors -- Sam Adams parent Boston Beer (SAM 3.43%) and Molson Coors Brewing (TAP 3.66%). Boston Beer's total sales fell 5.4% in 2016, year over year, and Molson Coors' sales were down 2.3%.

Still, to spur top-line growth enough to help lift its earnings out of their slump, Anheuser needs to get creative. The company has made some interesting announcements lately about new expansions besides this Lime-A-Rita makeover; one was about a coming product partnership that would allow consumers to make beer and cocktails at home with Keurig machines.

Will these kinds of market-expansion efforts be enough to lift Budweiser's parent out of its slow-growth slump and get earnings on the right track again? Anheuser-Busch already claims close to half of the U.S. market, and nearly a third of the global market following the SABMiller acquisition, so it will take some drastic moves to really move the needle in terms of companywide sales and profits.