Shares of AveXis Inc (NASDAQ: AVXS), a clinical-stage biotech company developing gene therapies, are adding to a tremendous run-up this year with a 16.8% gain as of 11:30 a.m. EDT during Friday's session. Yesterday afternoon, the company included phase 1 trial data that could make this a nervous weekend for Biogen Inc (NASDAQ:BIIB) and Ionis Pharmaceuticals Inc (NASDAQ:IONS) investors.

The FDA's last new drug approval of 2016, Spinraza for the treatment of spinal muscular atrophy (SMA), might have some competition sooner than anyone had expected. A commercial launch for the RNA antisense therapy discovered by Ionis and marketed by Biogen is still in its infancy. With a lack of competition and a list price of $750,000 for the first year of treatment (then $375,000 for each year thereafter), it's expected to generate about $2 billion in annual sales at its peak. 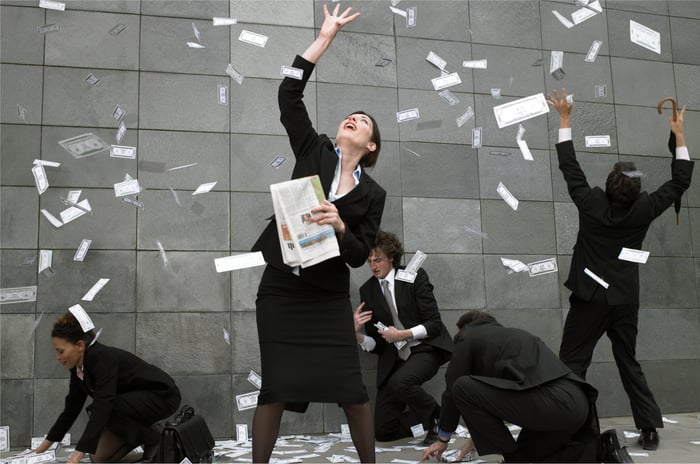 Of course, market entry of a viable competitor could limit Spinraza's pricing power, and Avexis could have an early clinical-stage candidate capable of applying that pressure. Results from a phase 1 trial released along with its fourth-quarter earnings report yesterday showed that 15 of 15 SMA patients treated with its lead candidate, AVXS-101, remained event-free at 13.6 months. The study didn't include a placebo group for comparison, but historical data suggests a 25% event-free survival rate at this age.

Also encouraging was a 100% event-free survival rate among all nine patients with follow-up data extending out to 20 months. Based on historical data, the expected event-free rate at this age is just 8%.

Investors will want to keep their eyes open for data from a planned pivotal trial for AVXS-101 designed to support a marketing application in the EU. After meeting with European regulators, it seems the company has been encouraged to run a 30-patient, single-arm trial using historical data as a comparator. Given the results we've seen so far, that trial and subsequent application look like a slam-dunk.

Unlike Spinraza from Biogen and Ionis Pharmaceuticals, AVXS-101 involves a viral vector that crosses the blood-brain barrier and delivers a functional copy of the SMN gene to the patient's own cells. Another stark contrast is a more convenient dosing regimen. While Spinraza requires several doses each year at $125,000 each, AVXS-101 has the potential of becoming a one-time dose regimen.