Please ensure Javascript is enabled for purposes of website accessibility
Log In Help Join The Motley Fool
Free Article Join Over 1 Million Premium Members And Get More In-Depth Stock Guidance and Research
By Travis Hoium – Mar 17, 2017 at 10:02AM

Two automakers battle it out for your investment dollars, and one has a much more certain future that investors can bet on.

In the high-end performance segment of the auto industry, Tesla (TSLA 1.72%) and BMW (BAMXF 1.44%) are two of the best brands and most innovative manufacturers in the world. BMW has long been an aspirational brand focused on high performance with a level of luxury that consumers demand when spending upward of $100,000 on a vehicle. Tesla is breaking all of the rules of the auto industry and is growing its fleet of electric vehicles.

But investors have to balance growth with performance and value in a stock. And with BMW and Tesla, those factors collide amid a passionate debate about the future of the auto industry. 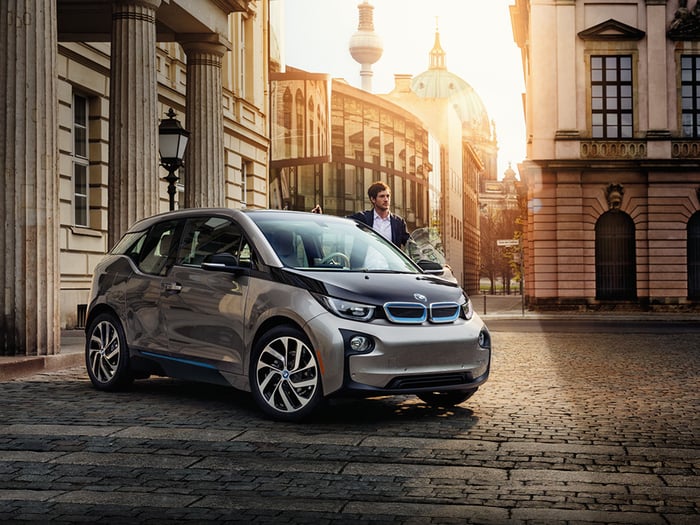 BMW is the better-known company of these two, having sold 2.37 million vehicles in 2016 and generated 6.9 billion euros in net income for the year. Its EBIT (earnings before interest and taxes) margin of 8.9% is among the industry's best, and management has guided for 8% to 10% EBIT margin through 2020.

What BMW brings from a manufacturing and quality standpoint is extremely valuable, even though those are less tangible factors than financial results. The company has decades of manufacturing expertise and has been able to generate strong margins while staying at the forefront of new technologies like carbon fiber, autonomous driving, and electric vehicles (EVs). It's even launched a ride-sharing product in Seattle, with Portland (Oregon) and Brooklyn expected to follow.

The advantage investors have with BMW is knowing that it can execute on its automotive manufacturing plans and having confidence in its ability to follow industry trends where they're headed. With EVs clearly growing as a percentage of auto sales around the world, BMW can learn and adapt to where the market is going. But it'll be able to follow upstarts like Tesla as they grow the market rather than being on the bleeding edge of a new industry.

The upstart with a lot of unknowns ahead

Tesla has gotten the most attention of any EV company, and for good reason. It's pushing the envelope, and its EV-only business model seems to be the most effective way to build a viable EV brand. And with energy storage and solar power under its wing, the company has broad and diverse exposure to renewable energy.

The allure of growth is intoxicating, but it comes at high risk as well. Analysts already expect Tesla will need to raise capital in coming months to fund its growth plans. And the company certainly needs to improve quality and its parts supply chain just to match competitors (for evidence of this, read fellow Fool Evan Niu's saga about trying to get his Model S repaired). Improving manufacturing quality and building out an international parts supply chain is no small task, and it's something Tesla has never done, so it's an unknown for the company and leaves a lot of uncertainty for investors.

Tesla's products are well liked by early adopters, but still haven't been tested by the masses. While BMW sold over 2 million vehicles last year, Tesla has only sold about one-tenth that figure in its nearly 14-year history. Translating hype to operational success could prove harder than Tesla can handle.

Given the unknowns facing Tesla, it's hard to justify paying 10 times the price-to-sales ratio investors are getting with BMW. And keep in mind that Tesla would have had to increase deliveries by 31 times just to match BMW in 2016. 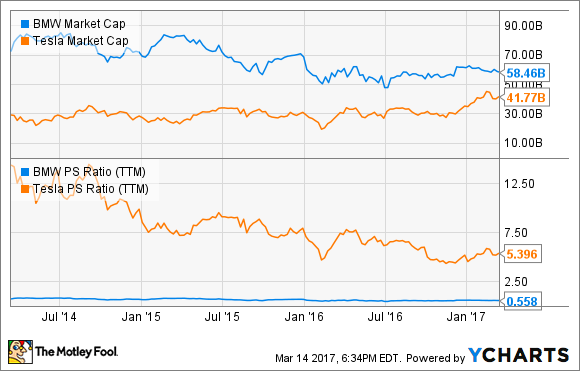 Maybe the more fundamental question is whether or not the auto industry, and big players like BMW, will be able to adapt to Tesla if the latter's success continues. And I'll point out that progress in the auto industry is extremely slow. Tesla seems like an upstart, but it's nearly 14 years old and is still making fewer than 100,000 vehicles per year. That's not much of a track record, no matter how good the company's brand is, and I think automakers will quickly be able to catch Tesla in the EV market.

The fact that investors have to pay a massive premium to own Tesla's shares is the main reason I think BMW is the better stock to own today. There's more stability, a longer track record, and we know BMW can be a world-class manufacturer -- something Tesla still hasn't proven to investors.