Please ensure Javascript is enabled for purposes of website accessibility
Log In Help Join The Motley Fool
Free Article Join Over 1 Million Premium Members And Get More In-Depth Stock Guidance and Research
By Chris Neiger - Mar 17, 2017 at 9:00AM

NVIDIA's data-center revenue is expanding quickly -- and it's likely to become an even more important part of the company's business than it is already.

NVIDIA Corporation (NVDA -4.20%) made 58% of its total revenue from its gaming segment in 2016. The company's graphics processing units (GPUs) not only bring in the vast majority of NVIDIA's revenues, but they also are the leading GPU in desktops, taking up just over 70% of all discrete desktop GPU market share and leaving rival Advanced Micro Devices with the rest.

Gaming is clearly NVIDIA's bread and butter right now, but investors might want to look at the company's data-center business if they want to peek into the company's future. 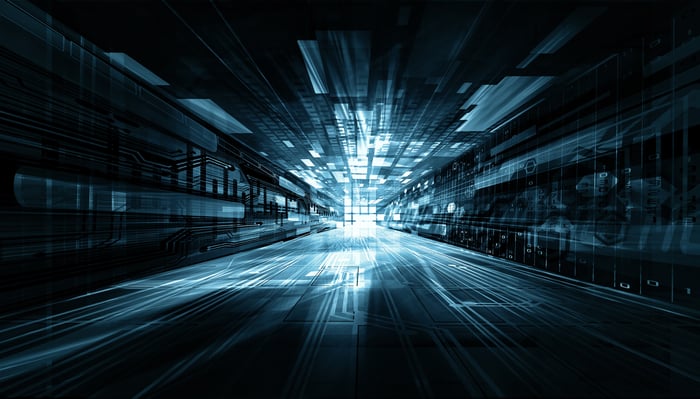 NVIDIA's fiscal fourth-quarter 2017 data center revenue was just $296 million, representing about 22% of total sales. That's not a lot compared with NVIDIA's gaming revenue, but don't count it out just yet. Data-center revenue grew by an amazing 205% year over year in the quarter and has been on a tear over the past few quarters. Take a look: 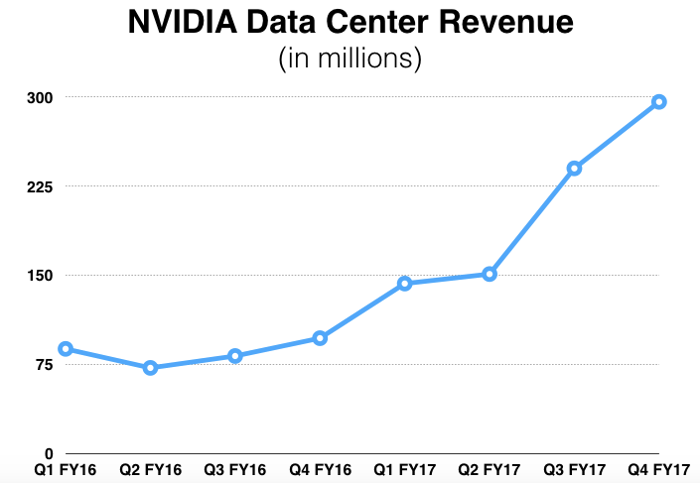 NVIDIA CEO Jen-Hsun Huang has said that his company has been investing in virtualization, computational science, and deep learning within its data-center business, which has helped lead to its growth.

The company is already using its GPUs in data-center servers for numerous tech giants. Data centers powered by GPUs tend to perform better than traditional servers because of their capacity to process image data (photos and videos) much more quickly.

On NVIDIA's Q4 2017 earnings call, Huang indicated that data-center revenue should continue to grow and highlighted some reasons it'll become an increasingly important part of the company: "The first adopters were hyper-scale companies like Microsoft, Facebook, and Google, which use deep learnings to provide billions to customers with AI services that utilizes image recognition and voice processing. The next area of growth will occur as enterprise in such fields as healthcare, retail, transportation, and finance embrace deep learning on GPUs."

He noted that data-center revenues have already grown by a factor of three and that he expects that trend to continue. NVIDIA believes that its total addressable market in the data center could be worth $5 billion.

The key to achieving more data-center growth will come from boosting the company's already strong position in artificial intelligence through its DGX-1 supercomputer, high-performance computing, and cloud computing offerings.

Huang said these markets have already brought growth for NVIDIA's data centers and added, "My sense is that as we look forward to next year, we're going to continue to see that major trend."

The long-term benefit for NVIDIA is that deep learning and AI, which rely heavily on GPUs, will become even more important in the data-center business. "The fact of the matter is at this point, deep learning and AI [have] really become how future software development's going to be done for a large number of industries, and that's the enthusiasm we're seeing around the world," Huang said.

NVIDIA's gaming segment will certainly retain its importance in the company's future, and NVIDIA's growing driverless-car technologies will play a major role as well -- but investors shouldn't overlook the company's ability to transform the data-center market with its GPUs.