Please ensure Javascript is enabled for purposes of website accessibility
Log In Help Join The Motley Fool
Free Article Join Over 1 Million Premium Members And Get More In-Depth Stock Guidance and Research
By Jason Hall, Anders Bylund, and Cory Renauer - Mar 17, 2017 at 9:58AM

Emotional investing is often a bad idea, but our contributors have rational reasons to be a bit giddy over American Tower Corp., Illumina, and Vestas Wind Systems.

It's usually a bad idea to let your emotions take control when it comes to investing. Nonetheless, there are sometimes companies we just plain get excited about. And that's the case with these three.

When we asked three of our top contributors to tell us about a stock that excited them, they were quick to respond with American Tower Corp. (AMT 1.10%), Illumina Inc. (ILMN 3.62%), and Vestas Wind Systems ADR (VWDRY 2.92%). Keep reading to learn what makes these companies stand out. 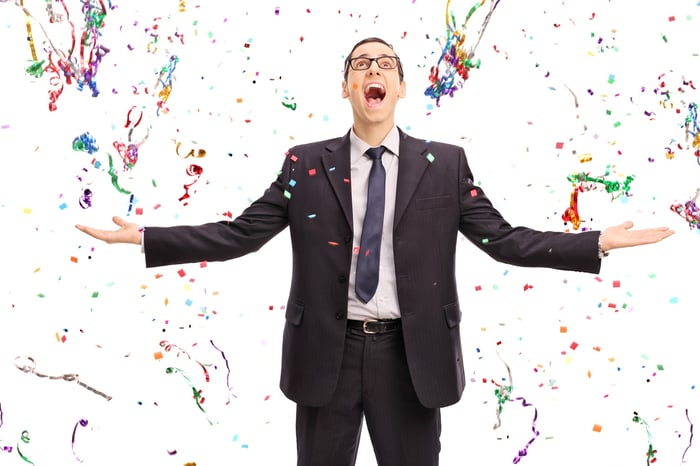 Playing it safe can be exciting, too

Anders Bylund (American Tower): Wireless communications are here to stay. Cell phones are making landlines obsolete, smartphone users are pulling down more data every year in an exponential growth curve, and the Internet of Things is bringing billions of new devices online in need of their own wireless data connections.

American Tower makes it easy to invest in these macro trends without picking a winner among competing wireless network providers, connection equipment makers, or even handsets. The company builds, buys, and leases radio towers across America and around the world.

The network providers find it useful to sell their towers to companies like American Tower, then lease back some capacity on multi-year contracts. This works because American Tower and its peers are happy to host many networks on each tower, resulting in fantastic economies of scale that ultimately lead to lower costs for the original tower owners.

In general, the wireless tower sector comes with solid cash flows and  long-term contracts the make revenues highly predictable. Gross margins are generous, sales will continue to grow for the foreseeable future, and it's hard to pick a loser here.

That being said, American Tower stands head and shoulders above its rivals. The company is exploring high-growth opportunities in places like India, South America, and Africa at a rapid clip, producing accelerated revenue growth along with superior profit margins and industry-leading cash flows.

This is how you build wealth for the long run.

Ready for a repeat performance

Cory Renauer (Illumina): Over the span of less than a decade, mapping out all the DNA base pairs that make up a single person's genome went from a billion-dollar endeavor to a routine procedure within the capacities of thousands of mid-sized laboratories. At the heart of this revolutionary cost reduction was Illumina, and its HiSeq line of DNA sequencing machines, which became the first to break the $1,000 per genome barrier a few years ago.

Since launching the first HiSeq system in 2010, Illumina's yearly revenue and stock price have risen over about 246% and 356%, respectively. Even if you missed the first run-up, there's still a good reason to be excited about this stock. Earlier this year, the company unveiled the NovaSeq Series of machines, which it expects to break the $100 per genome barrier.

Vastly cheaper DNA sequencing has allowed researchers to gain a greater understanding of the genetic aberrations that cause (or at least influence) a range of diseases. That, in turn, has begun to give rise to an age of personalized medicine. Illumina's latest achievement puts whole human genome sequencing capabilities within reach of everyday healthcare providers. That's a market far larger than the one it enjoys a commanding share of right now.

It's too early to know what form personalized medicine will take in the long term, but I think it's safe to say this is one stock that will benefit regardless. That's worth getting excited about.

A long tailwind of growth for Vestas 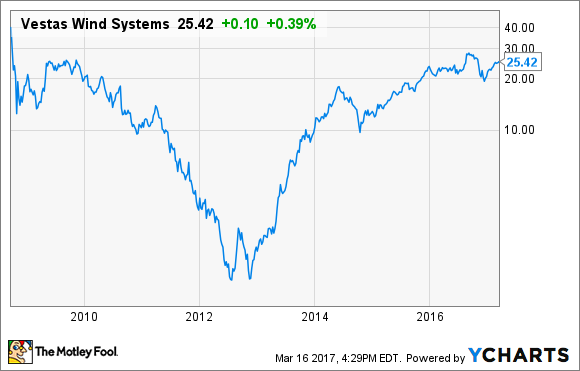 That's right -- anyone who bought shares at the bottom in mid-2012 and held, have seen their investment go up by more than 10 times.  Yet as wonderful as those returns are, I'm still excited about the future for Vestas.

The company is a pure-play investment on the growth of renewable energy generation -- in this case, wind. Vestas is one of the world's biggest manufacturers of wind turbines. And there's absolutely no doubt that wind, today, is cost-competitive with any fossil fuel, and a growing global population will continue to increase demand for the turbines the company builds, installs, and services all over the world.

One of the biggest drivers for this company will be the burgeoning global middle class, which is set to add billions of new members in coming decades. These new upwardly mobile global citizens will be responsible for a major increase in the demand for electricity, and wind is set to continue becoming a bigger part of the power-generation mix.

Today's Vestas is incredibly well-positioned. In the past, the company struggled with the cyclical nature of demand for its turbines, as utility investments tend to peak and fall from year to year. But its current leadership made a number of changes to the way the company operates, restructuring its operations to drive down the fixed costs which weighed heavily when demand was weak. Now, the company is able to operate profitably across the demand cycle.

That will pay off big for long-term investors, as the company will be better able to invest in new technology on a consistent basis, while also returning more cash to shareholders via buybacks and a dividend that's likely to grow over time.

With Oil Crashing Again, These 3 Stocks Are Buys

Roundtable: 5 Dividend Stocks to Buy and Hold Through the Market Turmoil

3 Stocks You Can Safely Hold for a Decade or More

Why American Tower Is Poised to Keep Poppin'