President Donald Trump wants to rebuild the U.S. military -- and says he'll increase defense spending by $54 billion next year to do so. But Trump also wants to save taxpayers billions of dollars on government contracts -- buying vastly more hardware, but increasing overall defense spending by only 10%.

Maybe by buying cheaper weapons systems that get the same job done for lower costs. 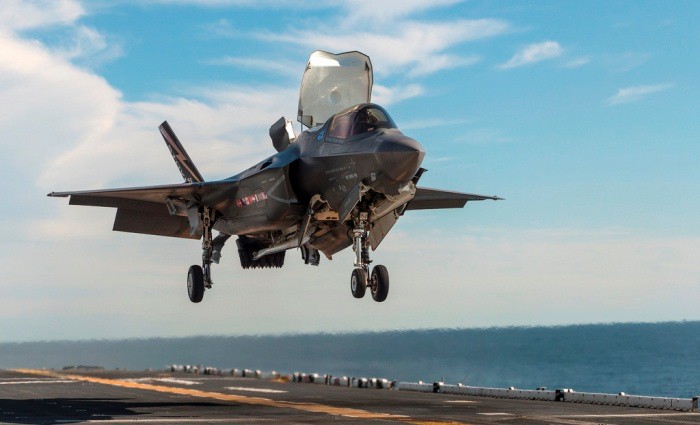 Lockheed Martin's F-35 is a wonderful plane -- with a very high price tag. But is there a way to do defense acquisitions cheaper? Image source: Lockheed Martin.

Take the Navy's new Littoral Combat Ship (LCS), for example. According to the Government Accountability Office (GAO), each new LCS bought from Lockheed Martin (NYSE:LMT) or Australia's Austal costs U.S. taxpayers approximately $655 million. Yet critics have blasted the vessel's design as "not ... survivable in high-intensity combat." For that matter, before even entering into combat, roughly half the LCSes delivered to the Navy have already suffered engine-related failures, and had to return to port for repairs.

Or consider the case of the F-35 fighter jet. Lockheed Martin's new stealth fighter has arguably attracted even more negative press than the LCS. The Pentagon's own weapons tester has called the F-35 "overall ineffective." In 2010, a scathing report from the Rand Corporation derided the F-35 as the plane that "can't turn, can't climb, can't [even] run" away. Yet it costs nearly $95 million to buy even the cheapest, F-35A variant.

"Winning" funding for weapons programs like these, the Pentagon may soon lose the war against runaway defense costs. But that doesn't mean there aren't alternatives -- cheaper, less technologically advanced weapons systems that can nonetheless be used to augment higher-end hardware from major defense contractors like Lockheed Martin.

Here are three such alternatives. RQ-23 TigerShark -- a nice drone. But can we stuff a Hellfire in here? Image source: Navmar Applied Sciences.

General Atomics' Predator drone was a marvel of engineering, capable of flying at speeds of 135 mph, remaining aloft for 24 hours without refueling, and carrying two AGM-114 Hellfire missiles for ground attack. At a price tag of roughly $4 million per unit, it was also a pretty affordable combat drone.

Unfortunately, Predator production has ceased, and the new drones that replaced it -- the Army's MQ-1C Gray Eagle and the Air Force's MQ-9 Reaper -- cost roughly 50% more, and four times more, respectively, than the Predator itself. What the Pentagon really needs is something that can perform the Predator's mission for it, but that costs less rather than more.

Enter privately held Navmar Applied Sciences Corporation, which in 2008 responded to the Air Force's call for a "lightweight, low cost UAV with an endurance of at least 18 hours with a payload" similar to Predator's by building the RQ-23 TigerShark.

Smaller than the Predator and with a slower speed and shorter range, TigerShark is not as powerful a plane as Predator -- much less General Atomics' more advanced Gray Eagle and Reaper upgrades. But TigerShark's "XP Long Range" variant is capable of flying unrefueled for 15 hours at a stretch, and can carry a payload up to 150 pounds -- enough for one Hellfire missile. Best of all, TigerShark costs only $50,000 per drone, a tiny fraction of what General Atomics has been charging.

Even at half the Predator's capability, that's a bargain price. 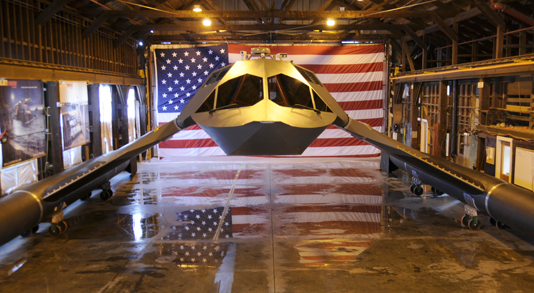 Speaking of bargain prices, remember how I told you the Navy's LCS warships cost $655 million a pop? Turns out, that's kind of a bargain. According to GAO figures, the Navy has spent an average of $3.5 billion per ship on its Arleigh Burke-class destroyers over the lifetime of that program, while the new Zumwalt class of destroyers is expected to cost taxpayers more than $23 billion -- to acquire just three ships.

In contrast, privately held Juliet Marine has offered to sell the Navy a new concept of wave-skimming warboat it developed, dubbed "the Ghost," for as little as $10 million each.

Again, Ghost is not nearly as powerful a platform as a Zumwalt warship, an Arleigh Burke, or even, probably, a Littoral Combat Ship. But its innovative 38-foot-long frame is big enough to carry as many as 90 short-range Nemesis surface-to-surface missiles aboard. And at a top speed of 50 knots, Ghost would be even faster than the Navy's fastest LCS -- darn near the fastest ship on the ocean.

All that for a bargain $10 million price tag, which would permit President Trump to build himself an all-Ghost, 350-ship Navy -- for less than half the cost of just one Zumwalt. 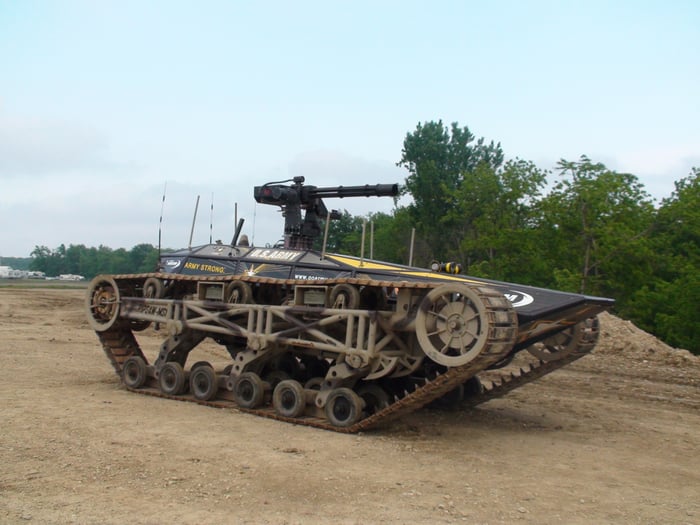 We've covered cheap airplanes and cheap naval warships so far. Now how about a little something for G.I. Joe?

Currently, the mainstay of the U.S. Army is General Dynamics' (NYSE:GD) M1A2 main battle tank -- a 62.5-ton armored beast that can cost $7.8 million just to refurbish, much less build all-new. That's an awful lot of money to pay for a piece of hardware that can be disabled by something as cheap as a $30 improvised explosive device,  -- but privately held Howe & Howe Technologies may have the solution.

A few years ago, Howe & Howe offered to sell the U.S. Army a fleet of its internally developed "Ripsaw MS-1" remotely operated tanks. Unarmored (because it has no crew to protect), but well-armed with a top-mounted chaingun, Ripsaw is built from lightweight steel alloy tubes, weighs less than five tons, and can hit ground speeds as fast as 65 mph -- accelerating from zero to 65 in three seconds flat. Its price: Just $200,000 per unit.

The U.S. Army sometimes spends that much on a single bullet.

If President Trump is serious about wanting the Pentagon to spend its defense dollars more wisely, he should ask Congress to fund purchases of these (and similar) cut-rate weapons systems -- maybe not instead of higher-priced, more advanced weapons from Lockheed Martin, General Dynamics, and their peers, but in addition to them.

Because here's the thing: The weapons cited above are so much cheaper than traditional weapons systems that you can buy a lot of cheap, attritable hardware without necessarily taking away much funding from traditional defense giants like LockMart and General D.

So maybe Trump shouldn't curtail General Atomics' Reaper program entirely, but instead reduce purchases of Reapers by just one unit, and use that money to buy 295 of Navmar's TigerShark drones. Don't cancel the Littoral Combat Ship program, but skip the purchase of just one LCS, and use the funds to acquire 65 (and a half) Ghost warships to augment the power of the LCS fleet. And so on and so forth.

Funding innovation among private companies need not pose a threat to large, publicly traded defense companies. Rather, it can encourage small, privately owned defense start-ups to continue innovating and developing efficient, cheap weapons systems, without starving the major defense contractors of the money they need to develop higher-end stuff.

The result would be a win-win-win scenario -- for traditional defense contractors, for the start-ups, and for taxpayers, too.