Please ensure Javascript is enabled for purposes of website accessibility
Log In Help Join The Motley Fool
Free Article Join Over 1 Million Premium Members And Get More In-Depth Stock Guidance and Research
By Daniel B. Kline - Updated Mar 20, 2017 at 10:00AM

Clearly people don't need to try on clothes before buying them.

The idea that brick-and-mortar stores have an advantage over online retailers when it comes to apparel sales has been a mantra that traditional chains have clung to. On a certain level, at least for older folks, it's a concept that makes sense. Buying clothes from a website like Amazon (AMZN -2.50%) does not allow you try them on. That leads to the inevitable hassle of returns, sometimes more than one, and less-than-instant satisfaction.

The ability to try clothes on in a store -- or make returns and exchanges in store on items bought from that store's website -- seemed like it would be a moat protecting physical retailers. For younger buyers, however, the 18-to-34-year-old millennial group most notably, it's more of a puddle you can step around. The hassle still exists, but it's being increasingly ignored. That's very good news for Amazon, which reportedly has the largest market share among millennials in apparel, and very bad news for department stores and mall retailers.

While apparel may not be the first thing that comes to mind when people think of Amazon.com, the online leader has been aggressively expanding in the space. The retailer launched a number of private label brands in 2016 containing everything from dress clothes to casual wear for men, women, and children. In 2017, the company is expected to move into women's underwear and the fast-growing active-wear category.

It may be a bit under the radar for some, but a report from Cowen & Company projects that Amazon's clothing and accessory sales will climb 30% in 2017 to $28 billion while Macy's (M -3.39%) will drop 4% to $22 billion. That would make Amazon the largest clothing retailer in the United States, Geekwire reported.

To make matters worse for Macy's, other department stores, and the mall retailers Amazon competes with, this trend is likely to accelerate as millennials gain buying power. A research report from Slice Intelligence shows that Amazon has twice the online sales of its nearest competitor with that age group. Amazon.com gets 16.6% of all the online clothing purchases made by the 18-to-34-year-old demographic, according to Slice.

Second place Nordstrom (JWN 1.36%) got 8.1% of the business and after that the numbers get fairly bleak. Macy's only takes in 3.6% of the dollars millennials spend on apparel and accessories online, while mall favorite Victoria's Secret ties Macy's, Old Navy scores third place with 5.1%, J. Crew nabs fourth at 4.2%, with Gap at 3.4%, and Banana Republic gets 2%. (Gap, Banana Republic, and Old Navy have the same parent company, Gap Inc.). 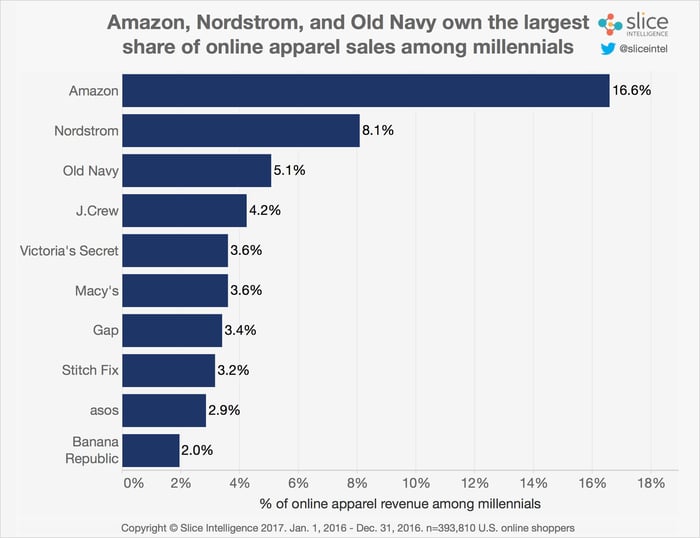 Amazon has been taking market share despite the handicap of shoppers not being able to try on clothes. That's an area where technology may soon lessen, if not eliminate, the advantage held by traditional retailers.

"In terms of trying on goods, perhaps in the near future augmented reality and/or virtual reality could serve as a solution not only for the fit aspect of a particular item, but equally important, the look and feel," wrote Cowen. That's part of why the researchers behind the study see Amazon sales jumping from $22 billion in 2016 to $62 billion in 2021.

It may not be game over for malls and department stores, but clearly if things continue as they are, Amazon will keep eating market share. These trends will only accelerate as millennials and the digital-first generation after them get older, gaining more control over the money spent on what they wear.

Clearly the current in-store and online experience offered by traditional retailers and department stores does not compare favorably to the ease of buying on Amazon. If those now seemingly out-of-date chains want to survive, they need a better battle plan than "people like to try things on."