Please ensure Javascript is enabled for purposes of website accessibility
Free Article Join Over 1 Million Premium Members And Get More In-Depth Stock Guidance and Research
By Ashraf Eassa - Mar 22, 2017 at 8:30AM

Intel says it has large opportunities ahead of it, and yet it still felt that it had to blow $15.3 billion to unlock a new growth opportunity.

Chip giant Intel ( INTC 3.10% ) recently announced that it was going to spend $15.3 billion to buy computer vision specialist Mobileye ( MBLY ). The company signaled that it wants to become the top vendor of "end-to-end" self-driving car computer platforms and to do that, it needed to have the computer vision expertise that Mobileye brings to the table.

Although only time will tell whether this purchase ultimately pays off, here's another thing -- aside from Intel's apparent loss of focus on its core businesses -- that really bugs me about this potential buy.

Rewinding back to Intel's investor meeting

At Intel's investor meeting, the company spent a great deal of time trying to convince investors that it has many large total addressable markets that it is currently going after. To put things into perspective, Intel's total revenue in 2016 was about $60 billion, and Intel said that the sum of the total addressable markets that it's going after will be on the order of $220 billion by 2021.

If Intel's total addressable market estimates were anywhere close to the mark, then there should be a lot of room for the chipmaker to grow.

What's even more interesting is that if we look at the breakdown of Intel's claimed total addressable market, we see that the portion of that total addressable market related to the Internet of Things (which is the segment that self-driving car technology would fall under) is "just" $30 billion -- the smallest of the segments that Intel identified. 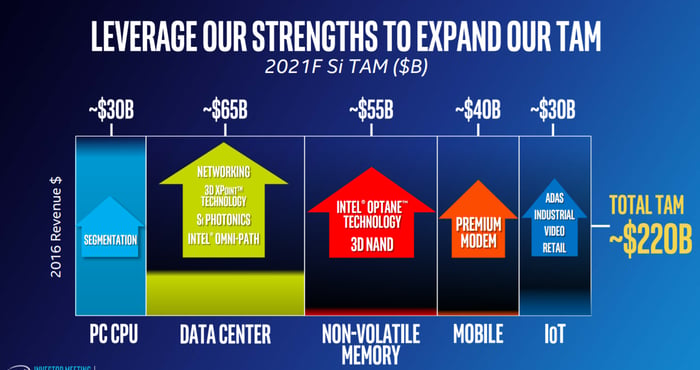 So, if Intel currently can address such large markets, then why did it need to buy Mobileye?

For example, Intel lists the $40 billion mobile silicon market as a growth opportunity, but let's be realistic here. There's no way that the entire $40 billion mobile chip market -- or even a large portion of it -- is open to Intel. Intel currently sells stand-alone modems, primarily to Apple ( AAPL 3.55% ), and the company does some contract chip manufacturing work for mobile chipmaker Spreadtrum.

That's some mobile-related revenue, but a drop in the bucket relative to that so-called $40 billion total addressable market.

Intel might have some room to grow its revenues from mobile-related chips, but barring a dramatic shift in strategy as well as significantly more success as a contract chip manufacturer for the likes of Apple, I think the served addressable market for Intel is a small fraction of the stated total addressable market.

Additionally, Intel cites non-volatile memory as a $55 billion total addressable market (Intel says that this figure combines both NAND flash and 3D XPoint memory), but here, too, Intel seems to be implicitly overstating the opportunity.

For example, Intel doesn't have a substantial presence in consumer-oriented solid state drives, it doesn't participate significantly (if at all) in the market for raw NAND flash, and it doesn't sell NAND flash into mobile applications (smartphones/tablets). Intel mainly sells NAND-based and now 3D XPoint based drives into data center and high-end client PC applications.

The point is this: Intel tried to sell investors on the notion that it's going after combined total addressable market that's multiple times larger than its current revenue base, but the reality is that it just went out and spent a huge amount of money on a small computer vision company on the expectations that the market for self-driving cars would be large in the future.

Intel's bet may or may not pay off -- time will bear that out -- but in the here and now, it looks to me that Intel doesn't seriously believe that its current opportunities are as large as it says they are.