It can be hard to explain exactly how TASER International Inc.'s (NASDAQ:AXON) business has grown or detail the progress it has made over the last few years, because its bottom line is obscured by investments in future growth. To make matters even more complicated, a lot of the body camera sales it's making now come with low-margin upfront revenue, but are back-ended by multi-year, high-margin, cloud-based service contracts.

Taking a step back, let's outline five statistics that show just how fast this company has been growing, and why it's well positioned for future growth. 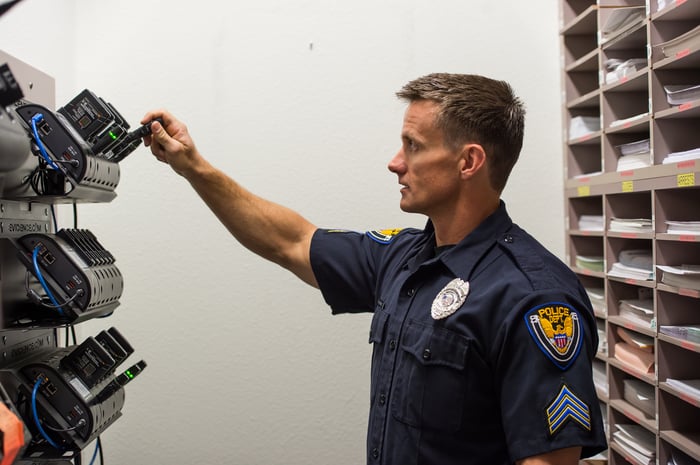 14,500 TASER customers have yet to buy body cameras

Thus far, 3,500 police agencies have bought Axon body cameras compared to the 18,000 that are using TASER weapons. So, as successful as the body camera business as been, it has a lot of possible growth ahead. And when you consider the profitability of body cameras, which I'll get to below, the business is just starting to scratch the surface of its financial potential.

Evidence.com's user base has grown by nearly 5 times

In the fourth quarter 2016, TASER International announced that the number of Evidence.com seat licenses has grown by nearly five times in less than two years from 27,000 in Q1 2015 to 132,000 seats booked at the end of 2016. And if the opportunity to sell to those 14,500 other law enforcement agencies using TASER weapons but not Axon body cameras is any indication, there should be more growth ahead.

The growth in customers booked is impressive. But the number of seats booked each quarter is growing as well. In Q1 2015, bookings were 7,400 seats; by Q4 2016 the number was up to 21,400, its highest level ever. As the base grows and the number of people added to the Evidence.com platform increases each quarter, it will leverage the investment that management has made in new products the last few years.

88% of Evidence.com subscriptions are multi-year

The booking growth is key because Evidence.com is an extremely high-margin business for TASER. In Q3 2016, the Axon services segment reported a gross margin of 81%. We know that 88% of Evidence.com subscriptions are for multiple years, so the customer base is locked into these high-margin contracts for as long as five years. As new customers are signed, it stacks a profit generator on top of the existing base, which will grow earnings long term.

LTV/CAC has nearly doubled in two years to 6.0

The last interesting statistic is that management says that long-term value of customers is now 6.0 times the cost to acquire those customers. This is up from 3.5 times in Q1 2015, evidence that the cloud-based service platform can be expected to increase shareholder value long term.

One of the reasons TASER International hasn't been very profitable the last couple of years is that it's been investing in products like new body cameras and the Evidence.com platform, which will drive future growth. And these five stats show just how far the company has come in a short amount of time.