In case you don't have the time to flip through CFO Bob Shanks' whole presentation, here are the most important points.

Investors weren't quite sure what to expect from Ford Motor Co.'s (F -2.46%) latest "Let's Chat" presentation Thursday. The events, which are regularly led by CFO Bob Shanks, hit on topics of particular interest to investors, and this one covered several, from first-quarter guidance to the global business environment and Ford Credit. Let's take a look at three critical things Shanks discussed.

These will be two of the most important factors for investors throughout 2017. Looking first at pricing, Ford has managed to drive strong year-over-year average transaction price (ATP) gains compared to the industry -- mostly thanks to its focus on SUVs and full-size trucks, which carry higher price tags and stronger margins. More specifically, Ford notes that key drivers of higher ATPs include the new Super Duty and F-150, which are up $3,600 year-to-date compared to the overall pickup segment, which is up only $1,500. 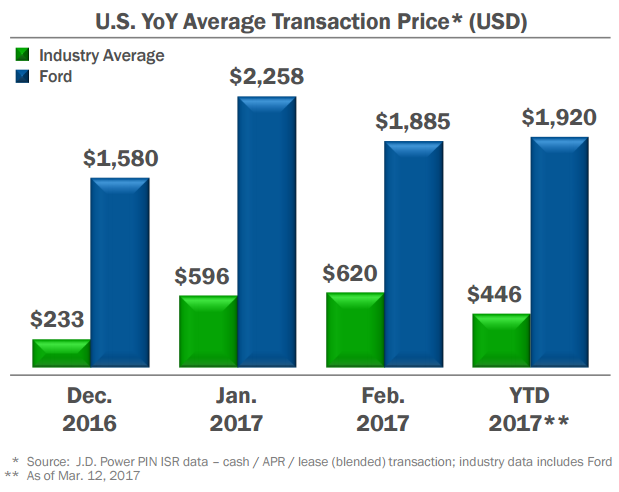 Ideally, investors would love to see rising transaction prices, seen in the slide above, combined with lower incentive spending. If major automakers choose to jack up incentives to gain market share during 2017, it could quickly crunch their bottom lines. Ford compares its incentives as a percentage of ATPs in the graph below. On that ratio, investors would like to see a flat percentage going forward, or a decline. 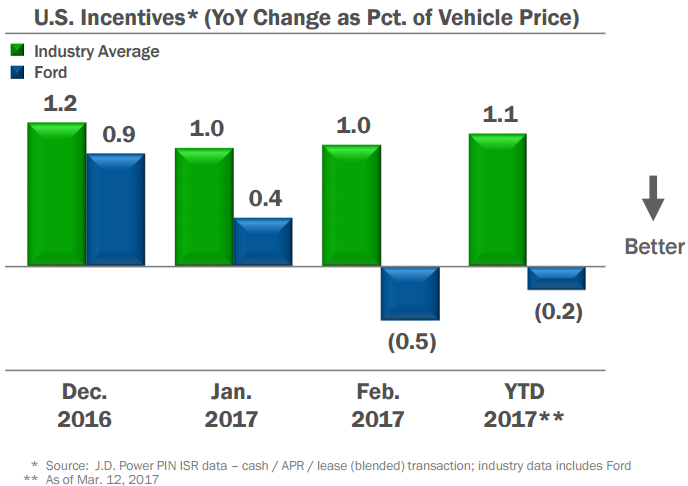 Another important factor that can foreshadow incentive spending is the supply of vehicles at dealerships. It's simple: When there's too much supply, dealerships need more incentives to push sales. And if the inventory is held within unfavorable segments, incentive spending gets even more unhealthy. "No one likes to cut production or dial up incentives, and we're seeing a bit of both," J.D. Power analyst Thomas King told Bloomberg in February. "We've got a lot of cars on the ground when the market is moving away from cars." 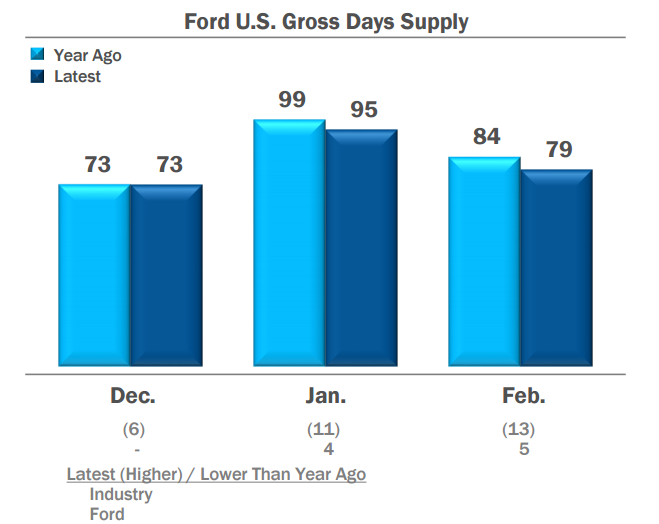 Generally, the industry aims for an average of about 60 days' supply of vehicles. This swings seasonally, and Ford's levels are in good shape considering two things: We're heading into the strong spring selling season, and Ford's inventories are typically higher than industry average as the company sells high-volume trucks. It is positive that we're seeing Ford's inventory take a step back from last year as the market peaks, but it will be worth watching throughout 2017, as it could give hints as to where major automakers' incentive spending will trend.

Ford Credit is a huge advantage for Ford, until the rare times that it isn't. Examples of such occasions include the Great Recession, when used car prices plummeted and destroyed Ford Credit's bottom line. Basically, when the Ford Credit arm leases a car to a consumer, it bases its figures in part on its estimate of the value that vehicle will have upon its return at the end of the lease. If the market changes, and used car values decline faster than anticipated, Ford Credit will have to sell the vehicles for less at auction than it estimated, and take losses. For context, here's a look at the National Automotive Dealers Association's index. 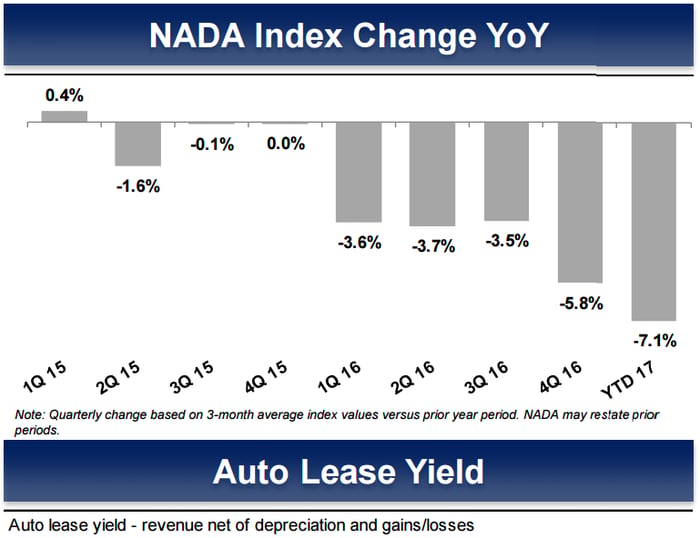 "We believe a decline in used car values may occur a bit later than consensus, but could also prove to be far more severe," Morgan Stanley analyst Adam Jonas wrote in reiterating an underweight rating for Ford on March 20. "We see Ford as particularly vulnerable given the size of its Finco program relative to other OEMs."

Ford Credit anticipates 2017 pre-tax profit of $1.5 billion, which will still make it more profitable for the company than any of its regions outside of North America, and expects earnings to rebound in 2018. Currently, the situation is far from dire, but not ideal. And if used car prices continue to decline rapidly, it could hit the bottom line quickly.

All in all, Ford expects to generate adjusted earnings per share of between $0.30 and $0.35 in its first quarter, which is going against a tough year-over-year comparison. That's well below analysts' consensus estimate of $0.47 per share. After that rough Q1, Ford anticipates the rest of the year will balance out, culminating in a pre-tax profit of $9 billion for 2017, down from the prior year's $10.4 billion.