The solar manufacturing business continues to be a tough one for companies to make money in, even for the biggest manufacturers in the world. Hanwha Q Cells' (NASDAQ:HQCL) fourth-quarter earnings report showed another loss for the industry on falling margins, continuing a downward trend seen across the board.

On the bright side, a single contract announced today could account for nearly a quarter's worth of demand. If Hanwha Q Cells can cut costs enough, it may be able to bring back profits, but there's no guarantee -- even after winning a contract that will account for a large percentage of the next year and a half's supply. Margins are falling across the solar industry as the rapid reduction in panel prices is hitting manufacturers' income statements. Previously reported earnings from competitors Canadian Solar, JinkoSolar, and JA Solar have all showed a consistent decline in results and even losses on the bottom line. But Hanwha Q Cells' results were particularly bad. 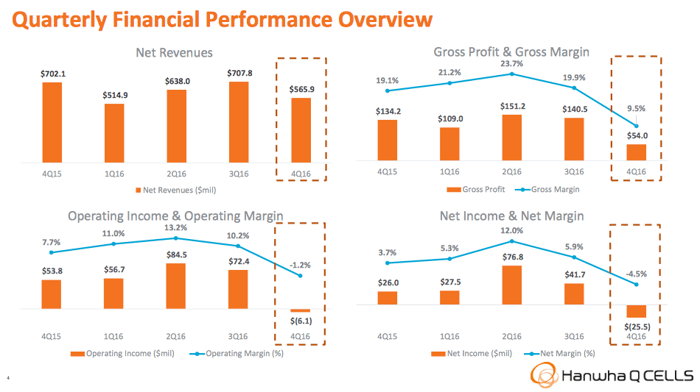 Despite the weak financial results, management expects to increase shipments to 5,500 MW to 5,700 MW, despite the fact that global installations are projected to drop by 5,000 MW to 69,000 MW.

The narrative we hear from Hanwha Q Cells is similar to what we hear from every other solar manufacturer: Financial results are getting worse and the world is oversupplied with solar panels, but it's forging ahead with more capacity expansion.

Part of that confidence comes from deals like the 1,000 MW construction agreement to build a power plant in Turkey. The project will take three years to build, but it's a huge amount of demand from a single agreement. What we don't know is if the price bid will be high enough to generate a strong gross margin, and frankly we won't know the results for years because the cost structure of solar manufacturing changes so quickly.

Commodity solar is in for a rough year

There's really no bright sign right now for commodity solar suppliers like Hanwha Q Cells. The industry is oversupplied, demand is falling in the short term, and margins are dropping, leading to financial losses. That's not a good position for any company to be in, particularly when new technology like mono-PERC and other high-efficiency options are becoming more highly valued than the panels manufacturers have typically made.

Despite management's confidence in expanding production and the new 1,000 MW project signing, I wouldn't bet on commodity solar manufacturers in solar today, and fourth-quarter results show that the trends are heading the wrong direction for investors.