Eighteen months in the making, DARPA's Gremlins program to develop a flying drone "aircraft carrier" is still on track -- and forging ahead.

We first told you about Gremlins back in 2015, when DARPA -- the U.S. Defense Advanced Research Projects Agency -- announced the start of an effort to build a new drone capable of deploying from a Lockheed Martin (NYSE:LMT) C-130, performing its mission, then returning to its mother ship to land -- a dance conducted 100% midair. 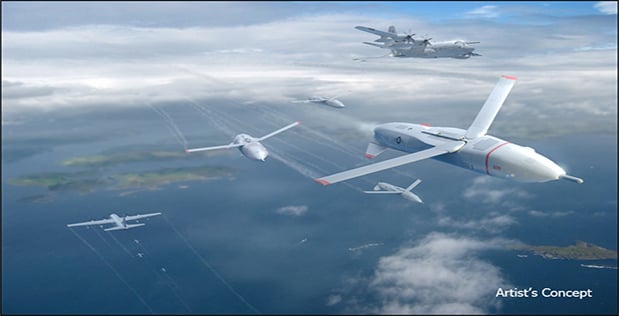 Six months after the project was announced, DARPA tapped four industry teams -- Lockheed Martin itself, Kratos Defense (NASDAQ:KTOS), and privately held Dynetics and General Atomics -- to investigate whether Gremlins was a workable idea or a pipe dream. Last week, that $16 million, one-year-long "phase 1" study finally wrapped up, with DARPA narrowing the field of contractors that would proceed to phase 2.

In this next phase, which begins this month and will last for a similar 12-month term, Lockheed and Kratos have both been knocked out of their "prime contractor" positions. Only privately held Dynetics and General Atomics will proceed in lead roles.

Their job will be to "mature two system concepts to enable 'aircraft carriers in the sky' using air-recoverable UASs that could carry various payloads." Designed to be semi-expendable, each Gremlin will be expected to fly at least 20 missions before needing replacement. In phase 2, Dynetics and General Atomics must complete "preliminary designs for full-scale technology demonstration systems" of their offerings, and begin developing the "individual system components" that will go into them.

Then, at the end of a year, DARPA will narrow the field once again and pick a single prototype to flight-test -- with testing slated to begin in 2019.

Whom to root for?

So what does all of this mean to investors? At first glance, probably not much. With both Lockheed Martin and Kratos knocked out of the race to serve as prime contractor on Gremlins, only privately held Dynetics and General Atomics remain. Yet there's still at least one team investors can root for: Dynetics.

This is because Dynetics boasts a whole "team" of subcontractors supporting its bid, several of which are publicly traded. (General Atomics may or may not include partners on its team as well, but the company has not mentioned any.) Be that as it may, Dynetics' team includes TransDigm (NYSE:TDG) subsidiary Airborne Systems, Moog (NYSE:MOG.A), and even Kratos, which thus remains in the competition, albeit not in a lead position. And while the money involved in this contract remains small -- and will be smaller still when broken down among several contractors -- Gremlins' pot of gold is already growing.

Whereas one year ago, phase 1 funding on the program amounted to less than $4 million per team, phase 2 funding has already increased to at least $21 million, although it's not clear if this is $21 million total, or $21 million for each bidder. How much bigger might the winner's pot get in phase 3, and after that, in an eventual production contract?

That depends a lot on how successful the teams are at building their respective flying aircraft carrier systems. But for a subcontractor as small as Kratos, for example, with less than $76 million in annual revenue from its drones business, every $1 million in extra revenue from a Gremlins contract win works out to more than a 1% increase in sales.