Snap (NYSE:SNAP) just started selling ads on its flagship Snapchat app two years ago, but it's already displacing Twitter (NYSE:TWTR) as a second source of social ad inventory after Facebook (NASDAQ:FB). Needham & Co. analyst Laura Martin recently spoke with the CEO of an undisclosed ad agency that's in charge of hundreds of millions in social ad spend. The source says Snap "has replaced [Twitter] as the [No. 2] social platform, although it is still too early to determine [return on investment], or how fast Snap's growth will be since [Facebook] is commoditizing Snap's best ideas."

There's a lot to unpack in that comment, but it's clearly not good news for Twitter. As Snap overtakes Twitter in advertiser preference, it makes it more difficult for the latter to reach its stated goal of GAAP profitability in 2017.

Meanwhile, Snap faces challenges of its own as it struggles to prove its return on investment for marketers and Facebook co-opts its best ideas. Here's the new social advertising food chain. 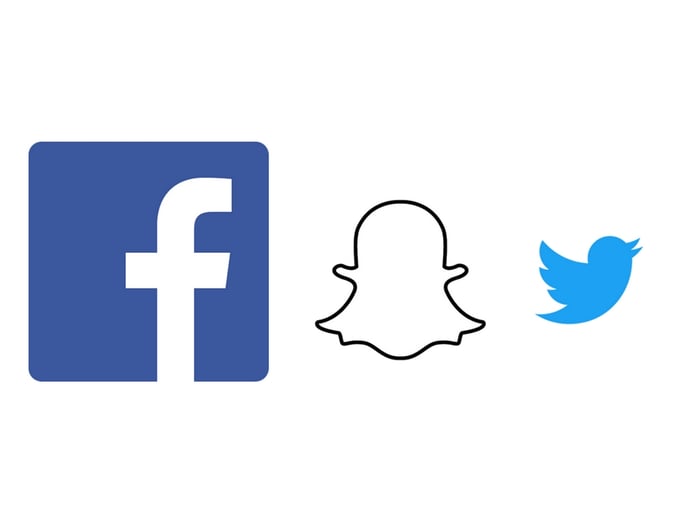 All of Snap's product improvements have clearly been aimed at Twitter since the company started getting serious about advertising in 2014. When Jack Dorsey took over as CEO in 2015, he said Twitter should be "as easy as looking out your window to see what's happening." But Snapchat -- with Our Story and Discover -- has arguably succeed more at that vision than Twitter.

It makes sense then that Snap is attracting the same advertisers as Twitter. And with a larger, younger, and more engaged audience, Snap is taking ad share away from the little blue bird.

Don't say I didn't warn you, Twitter investors. Snapchat's new product features since 2014 have all been aimed at engaging audiences in the same way Twitter has been focusing -- video and live. Our Story puts users right in the middle of big events around the world as they're unfolding. Twitter tried to mimic the feature with Moments, and it recently folded that product after it couldn't change user's behavior. Meanwhile, Discover (now called Publisher Stories) gave media companies a platform to showcase their best video content.

Twitter is now hyper-focused on video after de-emphasizing its direct response and promoted tweet ad products. The higher value ads might help it reach profitability in 2017, but it'll be off a smaller revenue base as Snapchat continues to steal ad revenue.

But things aren't all roses for Snap. As Martin's source mentioned, it's still too early to tell about return on investment. The early indications aren't good, though. A recent survey from AdAge and RBC Capital found the return on investment of Snapchat ads is lower than those of nearly all of its peers, even Twitter.

Marketers big concerns are focused on measurement, targeting, and engagement. The good news for Snap investors is that the first two factors are well within Snap's control, and it's working on several tools and partnering with third-party companies to improve both measurement and targeting. But there's not much Snap can do to improve how much its users engage with Snap ads (the video ads between Stories).

In addition, Snap ads can cost more to produce, since it sells only vertical video ads. Marketers must make special cuts of video ads to fit the format, adding to the cost of the ad campaign, thus lowering return on investment.

A big reason marketers are willing to take a flier on Snapchat ads is that the platform was growing extremely quickly. If they put a bit of work in now to develop some best practices and know-how with Snap ads, it'll pay off in the future, when Snapchat's audience is even bigger.

But the size of Snapchat could be limited as Facebook continually rolls out features across its family of apps that directly copy Snapchat's. The most popular example is Instagram Stories, which amassed 150 million daily users within five months of its launch. For reference, Snapchat had only 161 million daily users as of December.

Importantly, the growth of Instagram Stories coincided with a significant slowdown in growth at Snapchat. If Facebook's efforts continue to have a negative impact on Snapchat's growth, we may see Facebook devour Snap's revenue, as it monetizes its various Snapchat clones.

So while Snap is moving up the food chain, it needs to move fast to make sure it doesn't get eaten by Facebook. Twitter didn't move fast enough, and now it's looking at declining revenue as Snap wins the favor of marketers. If Snap can't produce the return on investment or engagement growth marketers are looking for, though, Facebook is ready to prove it can.