Self-driving cars are coming. From this vantage point in 2017, it seems likely that the first fully autonomous vehicles will begin to come to market within the next five years.

The first self-driving vehicles will likely be expensive, and most of them will probably be destined for businesses like ride-hailing fleets and delivery companies. But it doesn't take a big leap of imagination to realize that transformative changes are likely once automated vehicles constitute the majority of traffic in developed countries.

As investors, we know that transformative changes bring opportunities. The question is, where are the opportunities to invest in the emerging business of self-driving cars?

Here's one that's worth a close look.

Autoliv (NYSE:ALV) is the world's largest supplier of automotive safety systems, with a client list that includes many of the world's major automakers. Its largest customers last year were the  Nissan-Renault alliance, Ford Motor Company (NYSE:F), and Honda Motor (NYSE:HMC). It's a big company, with over 70,000 employees in 27 different countries, and it generated a little over $10 billion in revenue in 2016.

"Automotive safety systems" might sound like a very broad category, and it is. It includes everything from airbags and seatbelts to advanced products like adaptive cruise control and automatic forward collision braking systems. 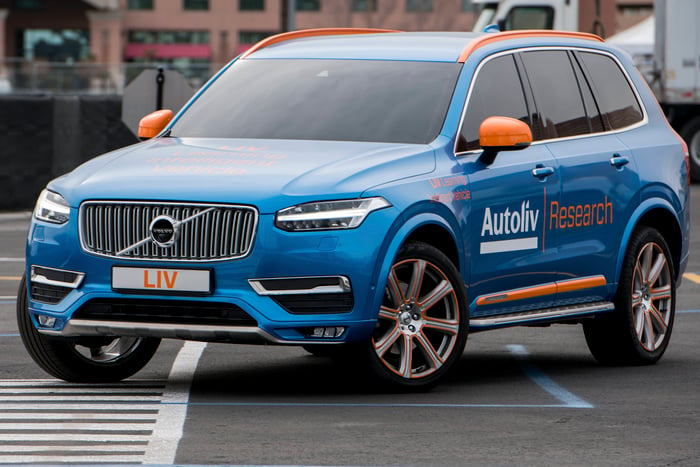 Autoliv is now taking the natural next step: A full-blown effort to develop a self-driving system -- with a Swedish partner well-known for automotive safety.

A big move into self-driving with Volvo Cars

Last year, Autoliv announced a partnership with Swedish Volvo Cars to develop a full self-driving system. It's structured as a 50-50 joint venture called Zenuity, headquartered in Sweden with additional operations in Munich and Detroit. Autoliv put 1.1 billion Swedish krona (about $125 million) into the venture to get it started.

Zenuity is starting with about 200 employees drawn from both companies, and it expects to grow to about 600 "in the medium term," Autoliv said in a recent statement. Those employees have begun working on a Level 4 self-driving system that will be used in Volvo's vehicles, and that Autoliv will have the right to begin marketing to other automakers in about 2021.

(A Level 4 system provides full self-driving capability within a limited set of circumstances. Most Level 4 systems currently under development rely on highly detailed maps and thus only work within mapped areas.)

Autoliv's motivation here is clear: Beyond the obvious profit opportunity, it wants to compete with a similar joint venture announced by rival Delphi Automotive (NYSE:DLPH), machine-vision specialist Mobileye N.V. (NYSE:MBLY), and chip giant Intel (NASDAQ:INTC) last year. That venture has promised to have a Level 4 system available to automakers by the end of 2019.

Until we see the systems, and see how the market shapes up, it's impossible to tell how well the Autoliv-Volvo system will compete with the Delphi-Intel-Mobileye alternative. But it's likely that there will be room for several players in this space, at least in the near term. Autoliv and Volvo are likely to be serious, credible competitors, and the revenue opportunity in this new space could be significant.

Autoliv as an investment

Autoliv has a price-to-earnings ratio of about 15.8, not excessive for its category. It pays a forward dividend yield of about 2.4%, supported by a payout ratio of 35.8%. More to the point, it has a long record of careful capital management that should reward patient shareholders no matter how the autonomous vehicle industry shapes up.

Long story short: If you're looking for ways beyond the obvious to invest in the coming wave of self-driving vehicles, Autoliv deserves a closer look.