The uranium miner is suffering through a rough industry downturn.

Cameco Corp (CCJ -1.85%) is one of the uranium industry's largest players. That, however, isn't enough to stop the pain of weak pricing in the industry. While Cameco is a top pick in the sector, income investors should take a step back and examine how secure the dividend is during these trying times.

Cameco's yield is around 2.8%. That's at the high end of the company's historical range, which suggests now could be a good time to buy in for dividend-focused investors. And while the dividend hasn't increased since 2011, it's held at $0.40 a year since then, even though uranium prices have been weak since about that same point. 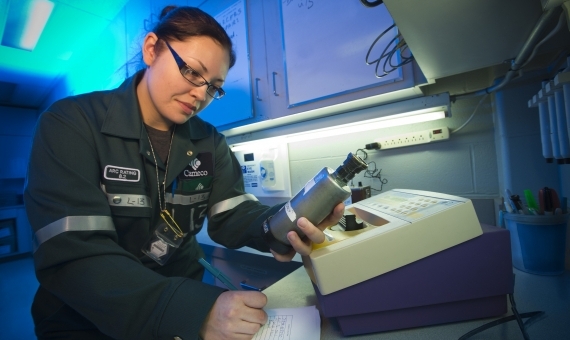 To be honest, Cameco has been doing reasonably well through the industry rough patch. For example, up until last year, it had remained profitable while uranium-focused peers had fallen into the red. As a quick comparison, fellow pure-play uranium miner Energy Fuels Inc. (UUUU -1.23%) hasn't made money since fiscal 2012. And last year's loss at Cameco was the result of one-time writedowns on an adjusted basis; the company's continuing operations remained in the black.

So, in many ways, Cameco is doing pretty well and has shown a commitment to its dividend. But as this downturn drags on, dividend investors have to start asking: How long can that commitment last?

When Cameco reported 2016 results in February, CEO Tim Gitzel noted that uranium prices were at 12-year lows, which is part of the reason for the one-time charges that left the company with a $0.16-a-share loss in 2016, down from a $0.16 profit in 2015. The charges were related to actions like closing facilities and laying off staff to adjust to the increasingly difficult uranium market. Pull those charges out, however, and Cameco earned $0.36 a share last year.

On the one hand, it's reassuring that ongoing operations were still in the black, but dividend investors should see a warning sign: Cameco's earnings were lower than its payout. That's not good and means Cameco's situation needs special attention. That said, it doesn't mean the dividend is doomed because dividends come from cash flow, not earnings. 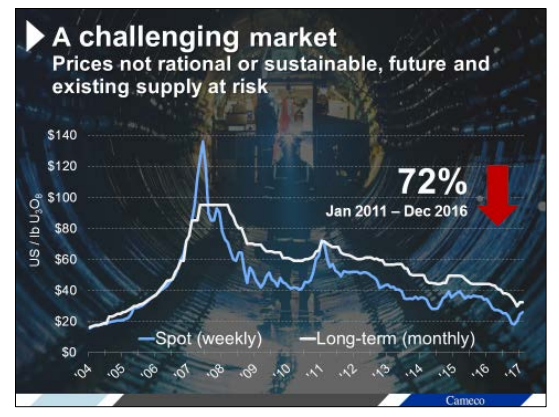 Cameco says uranium prices are not rational, but it still has to deal with them. Image source: Cameco Corp.

The problem is that 2016 wasn't great on the cash flow front, either. Cash flow from operations was $312 million, capital investments totaled around $218 million, and the dividend was $118 million. So the company ended up spending more cash than it generated, which is why the company's cash balance fell from $459 million at the start of 2016 to $320 million by the end.

Cameco can't keep burning cash like that and maintain its dividend. But it still has some room to save money. For example, in 2016 the miner spent around $70 million on growth projects, with the rest going to sustaining operations and replacing capacity. That was about a third of its total capital spending. In 2017, growth spending is set to drop to $15 million, or just 8% of the capital budget. Capex overall is projected to fall to $190 million.

And while uranium prices are still historically weak, Cameco's business is built off of long-term contracts. That's why it was able to achieve pricing that was 60% higher than the average spot price for the year. Its contracts should continue to provide robust pricing protection throughout 2017. With $320 million in cash at the start of the year, it looks like Cameco can hold the line for another year.

So, yes, it looks like Cameco has the wherewithal to continue supporting the dividend in 2017. Without a sustained upturn in the uranium market, however, the dividend could still end up a casualty of this prolonged uranium industry downturn at some point in the not-too-distant future, which is why dividend investors should be keeping a close eye on the company's cash flow in addition to its earnings.