Last year, Twitter (TWTR -1.08%) made a big splash when it won the rights to stream 10 of the NFL's Thursday Night Football games. The social network quickly sold all of its ad inventory for the games, and it was immensely profitable for the company (if at a relatively small scale). Twitter reportedly sought to bring in $50 million in ad revenue from its content partnership with the NFL, and probably exceeded its goal. Considering it paid just $10 million for the streaming rights, that's a good deal. 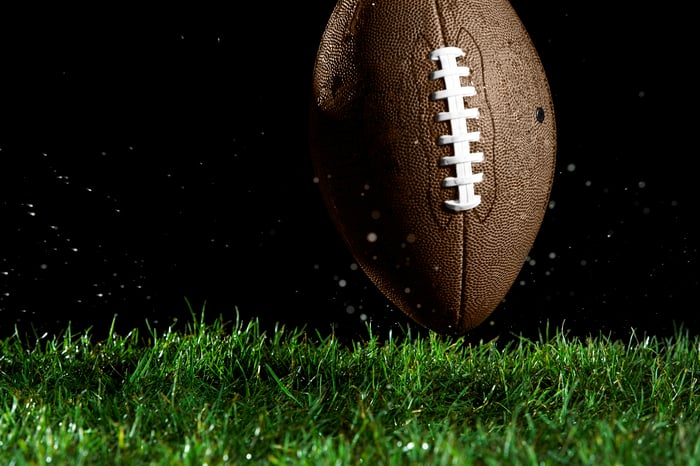 But Twitter's viewership numbers may have been a bit disappointing, particularly for advertisers. Twitter averaged just 200,000 to 300,000 viewers per game on average. Twitter prefers to point to the 3.5 million unique viewers per game on average, but the television ratings standard use average audience. By comparison, the television broadcasts consistently had over 10 million viewers and even topped 20 million viewers on occasion.

Those ratings are noteworthy because marketers paid quite a bit for Twitter's ads -- around $250,000 for a package of 20 ads during the games and some pre-roll ads on NFL highlights. That's nearly half of what advertisers paid for the television broadcasts to reach an audience about 2% the size. Twitter is switching to guaranteed viewership on some video ads, so the NFL deal might not be as lucrative for Twitter this time around.

Facebook offers similar benefits to the NFL as Twitter, but it has a scale that's five times larger. While Twitter is generally considered the place to discuss live sports events, Facebook still has the potential to attract a much broader and engaged audience. Facebook boasts that its users spend 50 minutes per day on average across Facebook, Instagram, and Messenger. With a broad portfolio of apps, Facebook should be able to promote and attract a much bigger audience than Twitter.

A deal with the NFL could help Facebook seed its dedicated video section. The company is interested in paying for premium video content to attract users to watch and upload more video to the social network. Facebook is also testing midroll video ads to directly monetize videos on its platform, and Thursday Night Football could provide a nice playground for the ad format.

While Amazon doesn't sport the same audience as Facebook or even Twitter, it's certainly willing to pay up for the NFL streaming rights. In fact, it offered $15 million for the rights last year, $5 million more than Twitter ended up paying. The NFL ended up going with Twitter for its ability to reach a global audience.

But things have changed at Amazon over the last year. Most notably, Amazon expanded Prime Video globally in December. It's also been negotiating for the rights to stream sports that are less popular in the U.S., but very popular internationally like auto racing and soccer. If Amazon can put together a package of sports rights for its international subscribers, becoming a destination to stream games, it could convince the NFL to take a shot with it.

Of course, the NFL will likely stipulate that Amazon stream the games to everyone, not just Prime subscribers. Nonetheless, Amazon could use it as a marketing tool for Prime Video as well as way to grow its burgeoning advertising business.

YouTube is currently facing some backlash for placing ads next to objectionable content. A deal with the NFL could provide a boost to YouTube's reputation as a place for premium digital video content. At the same time, YouTube's current reputation struggles could deter the NFL from making a deal in the first place, as the league is very brand conscious.

YouTube is making a play for more television ad dollars, particularly with the impending release of YouTube Unplugged, its over-the-top linear television service. The company will already be selling television advertising for YouTube Unplugged, and it could use Google's ad targeting data to maximize its ad revenue. That factor will put it at the top of the list for its ability to successfully monetize an investment in Thursday Night Football, which could enable it to come in with the highest bid among the companies in this article.

Overall, each company has a lot to gain from winning the rights to Thursday Night Football. Twitter certainly has the most to lose if it doesn't win, considering analysts already expect a decline in ad revenue this year. The NFL is expected to announce a winner in the next month or so, since it announced the Twitter deal last April.