Flexion Therapeutics' Zilretta is under review by the Food and Drug Administration (FDA) as a new approach to treating knee pain caused by osteoarthtritis, and positive results from trials suggest it could eventually replace corticosteroid injections for millions of patients. 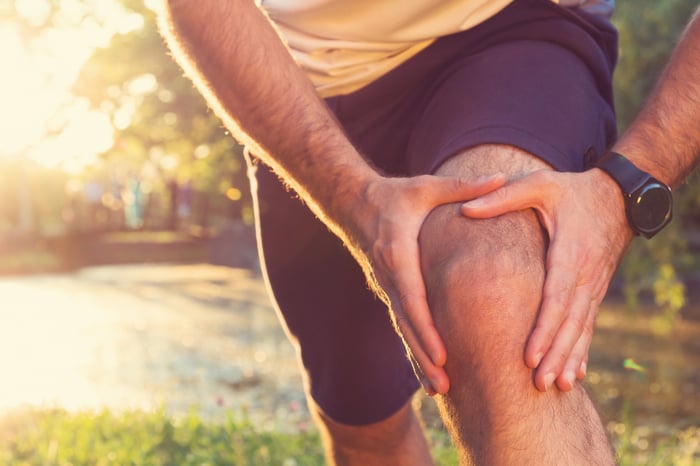 The FDA will issue a go/no-go decision on Zilretta on Oct. 6, and data from studies may be compelling enough for a green light. In trials, Zilretta patients enjoyed a median 50% reduction in knee pain, and, more importantly, that pain relief was maintained throughout a three-month period. If Zilretta's effectiveness holds up in the real world, there's a good chance it will win support with doctors and patients because pain relief from corticosteroids typically wears off within weeks -- long before the next scheduled quarterly injection.

Roughly 5 million people currently receive corticosteroid shots because of their pain, and management thinks Zilretta could fetch $2,000 per patient per year. If this estimate is on target, it won't take a lot of market share for Zilretta to be a top seller.

Recently, rumors have surfaced that acquisition-hungry Sanofi SA (SNY 1.74%) is kicking Flexion Therapeutics' tires. It wouldn't shock me if those rumors are true. Sanofi has attempted to buy Medivation and Actelion in the past year, so it's clearly on the hunt for acquisitions. Importantly, Sanofi already markets Synvisc-One -- a hyaluronan injection used to treat knee pain -- which generates $400 million per year, so it's already got the sales force in place to turn Zilretta into a winner.

Cara Therapeutics thinks CR845's ability to relieve pain with less risk of addiction could allow it to capture a big share of the 24 million pain prescriptions written for opioids every year.

CR845 is being studied in hip and knee pain in osteoarthritis patients, and management just reported data showing that it can help reduce chronic itch in dialysis patients.

The potential to elbow market share away from opioids and deliver greater relief to dialysis patients is exciting, but more trials are required before Cara Therapeutics can file for FDA approval of CR845. Because more work needs to be done, it may be a while before this drug makes it to market. Nevertheless, this company's opportunity is big, and that makes tracking its progress worthwhile.

However, it does so selectively. And it's specifically designed to cross the blood-brain barrier slowly to reduce euphoria. By more precisely targeting the receptors and limiting euphoria, it may deliver similar relief to opioids with less of a risk of abuse.

Last week, the company announced results from a trial testing NKTR-181 for chronic back pain, and that trial's data didn't disappoint. NKTR-181 reduced pain relative to a placebo, and it did so without causing opioid-like levels of euphoria.

Those findings sent Nektar Therapeutics shares soaring, but the company hasn't announced its plans to file for FDA approval yet. Instead, management is searching for a bigger peer to partner with on the drug. Assuming it secures a deal, an FDA filing should come shortly thereafter, with an official regulatory decision coming 10 months later.