The energy market has been slowly crawling its way out of one of the most devastating downturns in decades. Even today, with oil prices in the $50 a barrel range, it is a stark improvement from this time last year: Rigs are headed back into the field, producers are lowering costs and filling cash coffers, and there is a greater sense of optimism for many parts of the industry.

Not all areas of the business have seen the benefits of these gains, though. One sub-sector of the energy market that continues to suffer mightily is offshore rig companies. If you look at the valuations for these companies today, they are trading incredibly low. 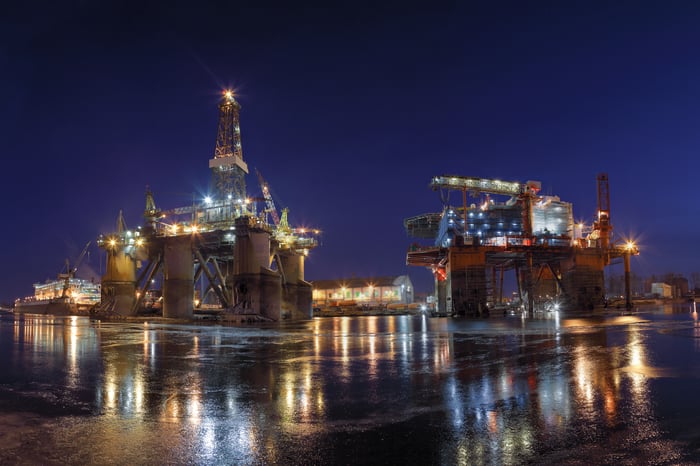 How on earth are these stocks so cheap? Did these companies' management teams insult an analyst's mother?  Let's take a look at why these companies are selling at such deep discounts and whether or not it's worth taking a flyer at these bargain basement stocks.

To fully comprehend why these stocks trade as low as they do now, we need to travel all the way back to 2007. Oil production in the U.S. was at the lowest in 50 years, oil prices were climbing at an alarming rate, and the term "peak oil" had entered the common vernacular. We were all under the assumption that the world was running out of oil and that the reservoirs not yet found were going to be incredibly expensive to develop. One of the few places left to find new sources was to venture deep offshore. So rig owners started building these ambitious, multi-year plans to build fleets of modern rigs that could handle the challenging job of drilling in more than 10,000 feet of water and in harsh environments.

This plan was working out well for a time. Oil was staying above $100 a barrel, which made even the most costly reservoirs economical. This high oil price did something else, though; it nurtured the development of shale resources. At these high of prices, North American producers could take a risk on a form of oil that seemed inaccessible until recently. Once producers figured out how to make a buck, U.S. production soared again, and it flooded the global market.

The spectacular crash in oil prices meant producers weren't spending on new exploration and development, especially in high-cost places like offshore. To make matters worse, these rig companies were either still in the middle of a fleet expansion plan or still carrying high debt levels from spending on new rigs.

The length of the oil crash has had two effects. One is that shale producers have become much more cost effective. Today, top producers can generate better rates of return at $50 a barrel than they could back in 2012 at $90 a barrel. Being able to produce at lower prices is helping to keep prices low, and further delay new spending in the offshore environment. Also, the longer low price environment means that working rigs are rolling off contract, and revenue at these companies is declining as a result. 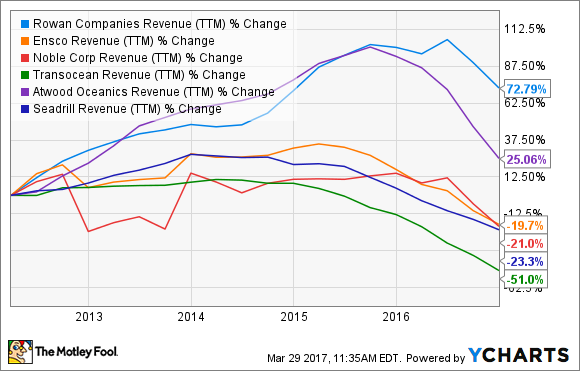 So now we're left with a slew of businesses in an industry that is likely going to see an even longer period without much work that needs to pay large bills to maintain these fleets of new rigs and service large debt loads. Sure, there some very early signs that offshore drilling activity is coming back, but we have yet to see it come to fruition.

Is this a dead industry?

As tempting as it may be to write off this entire sector as dead money, offshore oil is going to be a major source of oil for many years to come. Global oil demand grows at about 1.5 million barrels per day lately, and the natural decline rates outside OPEC are at 5% annually or about 2.6 million bpd. While shale can fill that need for a while, eventually decline and demand growth will overwhelm growth from current projects.

The question for investors is how long that will take, and whether these companies will be around when the turnaround comes. This week, OceanRig UDW, a smaller rig company, filed for Chapter 11 bankruptcy. Seadrill has also said that it is negotiating with its creditors because it has a significant debt maturing next month, and it has warned investors that bankruptcy is a possibility.

Probably the decisive factor in determining which companies will make it through this tough time in relatively decent shape is to look at balance sheet strength.

Based on these numbers, it appears several of these companies have been in capital preservation mode; squirreling away any excess cash to cover expenses for a while until the market picks back up again. The most notable exception is Seadrill, which has yet to complete its overambitious build out plan. So it's no surprise that the company's stock currently trades at eight cents for every dollar of tangible book value.

Those better-capitalized companies are even looking to take advantage of the situation. On Transocean's most recent conference call, it said that it would be looking to add to its fleet by buying distressed assets. If it does, it will be soon.

This is a real tough call here. The oil and gas industry is going to need offshore rigs in the future, and the companies that can make it through this are likely going to gain market share. That means an investor could make a killing if they pick the right company at these incredibly low valuations. At the same time, we're still in the middle of the market shakedown, and there is a chance that some of the companies on this list won't live to see another day. Offshore rigs are the ultimate high risk, high reward industry out there today.

For those with little appetite for risk, this is an industry to be avoided at all costs. However, an investor that isn't afraid to see one or two stocks tank could benefit from buying several rig companies and seeing which ones make it out alive.