These winners ended the week on a high note. Here's what investors need to know.

The stock market was mixed on Friday as investors mulled the end to a strong first quarter of 2017. When all was said and done today, the Dow Jones Industrial Average declined 65 points, or 0.3%, leaving the popular index up 4.6% over the past three months. Meanwhile, the S&P 500 declined by a similar margin, bringing its year-to-date return to 5.5%, and the Nasdaq closed roughly even to end the first quarter up 9.8%. 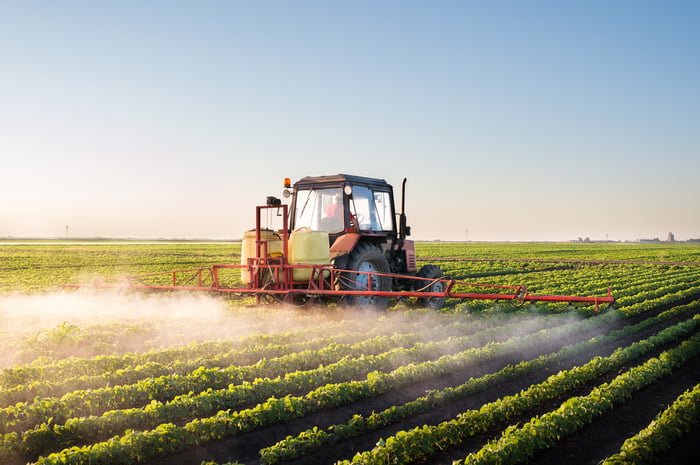 FMC anticipates its own acquisition will generate $1.5 billion in incremental revenue and $475 million in earnings before interest, taxes, depreciation and amortization (EBITDA) this year. This will also make FMC Agricultural Solutions the fifth-largest crop protection chemical company in the world by revenue.

Investors should recall that Himax stock ended last year on a rough note, falling 18% in December alone, as analysts lamented near-term headwinds for the company's LCOS and WLO product lines after CEO Jordan Wu warned its major AR customers were shifting their "focus to the development of future generation devices."

But Himax stock is already up more than 50% so far in 2017, most recently helped by the company's encouraging fourth-quarter 2016 results released in February. As investors anticipate its ability to capitalize on the AR and VR markets in the coming quarters, it's hard to think of a better way to do so than by playing a central role enabling a key feature in Apple's 10th-generation iPhone later this year.

Finally, shares of TRC Companies skyrocketed 46% today after the engineering services specialist announced it will be acquired by affiliates of investment fund New Mountain Capital, LLC for $17.55 per share -- a massive premium over TRC's closing price yesterday at just $11.95 per share. The deal has already been unanimously approved by TRC's board of directors.

"This transaction will deliver immediate value to our shareholders while enabling TRC to continue to pursue its long-term growth strategy," stated TRC chairman and CEO Chris Vincze. "We are confident this partnership with New Mountain Capital represents the best path forward for all of TRC's stakeholders."

The acquisition is still subject to customary closing conditions and the approval of TRC shareholders, but is expected to close before the end of June this year. With shares trading just pennies below the agreed acquisition price, and unless waiting to sell would result in more favorable long-term capital gains tax treatment, I think TCR investors would do well to take their money and put it to work elsewhere.