Amazon is taking a multi-pronged approach to building its position in video games.

Amazon.com (AMZN 3.66%) has come a long way since its early days as an internet-based book seller, and it's still pushing into a wide array of new businesses. With the web giant emerging as a major force in content, and the popularity of video games at an all-time high, it shouldn't come as much of a surprise that the company is angling to become a bigger player in the world of interactive entertainment.

Amazon has already made moves into video game hardware and software development, and now the company is bringing an online retail store to its popular Twitch streaming platform -- a move that has big potential. 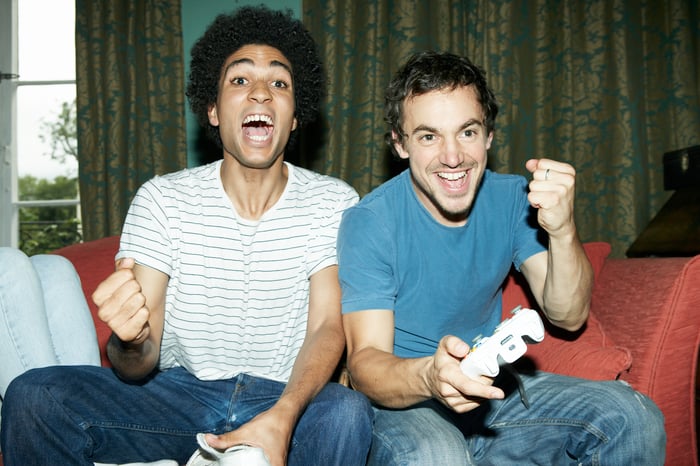 Amazon wants you to buy games through Twitch

Twitch is a social platform for video streaming, with most of the site's content centering around video games. It's also the fourth-largest source of internet traffic in America, and reaches roughly half of the country's millennial-aged males.

Amazon purchased Twitch for $970 million in 2014, and the platform's massive audience and stellar user engagement have made it into one of the biggest forces in the video games market. Each month, roughly 100 million unique viewers gather on the site to watch streams and interact with broadcasters and other community members, making the platform tremendously influential in how customers discover and experience video games. As such, the addition of an option to purchase games and add-on content through the site seems to be a natural fit.

Here's Twitch's VP of commerce Matt McCloskey on the service's upcoming marketplace, which is set to launch this spring:

We're enabling game developers to sell game content at the exact time and place their communities are gathered to watch, which in turn lets streamers earn money from games sold on their channels.

A breakdown of the revenue sharing provided by the company reveals that games publisher's will keep 70% of sales while streamers receive a 5% cut of sales that are linked to their channels. Giving its content creators additional incentive to stay on Twitch should help to keep the platform robust and promote the evolution of its marketplace.

Twitch's push into game and content sales puts Amazon increasingly in competition with Steam -- a popular online games store, -- and traditional brick and mortar retailers like GameStop (GME 6.81%). Steam generated roughly $3.5 billion in revenue in 2016, while sales of new software at GameStop came in at roughly $2.9 billion, and global retail revenues for games reached $26 billion.

Last year, Twitch brought in roughly $2 billion in revenue -- mostly from ads, viewer donations, and subscriptions. The platform is still growing at a rapid clip, and it has lots of room to continue expanding as it widens its audience and challenges other game sellers for market share.

In addition to including a premium version of Twitch in the Prime subscription package, video game-related ventures look to benefit other areas of Amazon's business. Amazon has used high-profile video game releases to get new users on board with Prime -- requiring a subscription to the service to purchase certain games directly through the company's online store, but games are also factoring into its cloud strategy.

Twitch runs on Amazon Web Services (AWS) -- the company's cloud platform and its fastest-growing and most-profitable business segment. Running Twitch at a discount relative to what it would cost to go through a third-party cloud provider creates a nice benefit, but the more crucial synergy is that the social platform is helping to secure new customers for AWS.

With more developers leaning on add-on and downloadable content sales to drive profitability, creating games that have long lifecycles is crucial, and Twitch plays a big role in the formation and evolution of online gaming communities. In a move to court developers, Amazon has built Twitch integration into the AWS suite, and even released a free engine for game development. Most major game releases now have some interaction with the cloud, and AWS' gaming-centric features could be a deciding factor when developers and publishers choose between Amazon's offerings and rival services from Microsoft and Alphabet.

Amazon has already produced exclusive video game content to bolster the appeal of some of its hardware products, and gaming features and software are likely to be a part of its future mobile and set-top box releases. The company is also continuing its game development efforts with a series of upcoming PC games that feature deep Twitch integration. These titles have the potential to be hits in their own right, and Amazon Game Studios could eventually become a meaningful revenue source, but the company's upcoming games are also compelling because they're being designed with the intention of expanding the reach and functionality of Twitch.

Amazon is still relatively new to video games, but, with massive resources and an array of promising initiatives under way, it's not hard to imagine that the company could emerge as a dominant player in the not-too-distant future. What's more, increased strength in the space is already creating holistic benefits.