There's a new EV start-up on the block.

Silicon Valley-based electric car start-up Lucid Motors formally exited stealth mode in December of last year when it unveiled its new Lucid Air, a svelte all-electric luxury sedan that will be capable of traveling 400 miles on a single charge and have 1,000 combined horsepower between two AC induction motors. Those are the specs that the company is targeting for the higher-end configurations; the $60,000 (before federal tax credit) base model will be a single-motor version that can go 240 miles before needing to charge.

I happened to be in Silicon Valley last week, and Lucid was kind enough to host me to discuss the Air, Lucid's strategy in the years ahead, and how the company plans on building the next generation of EVs. I spoke with Chief Technology Officer Peter Rawlinson, who was also the chief engineer of the Tesla (TSLA 4.67%) Model S before leaving that company half a decade ago. Lucid even took me for a spin in an alpha prototype.

Here's what Rawlinson told me in an hour-long interview that covered a wide range of topics. (Some quotes have been edited lightly for clarity.)

Rawlinson was crucial in the development of the Model S and is named as an inventor on many of Tesla's patents for its sedan. Meanwhile, Tesla famously open-sourced its patents in 2014, vowing not to initiate any patent lawsuits against other companies using its technology "in good faith." Given Rawlinson's familiarity with the intellectual property and the apparent ability to use it, I wondered if Lucid was using any of Tesla's patents. Nope. Rawlinson says Lucid is using exactly zero of Tesla's patents for a couple of reasons. First, Lucid is looking to develop even better EV technology on its own, in which case it simply doesn't need Tesla's IP. Second, it's not clear what constitutes "good faith" from Tesla's perspective, and it would be unwise and risky to build a product based on Tesla IP if there is considerable uncertainty surrounding the usage and implementation.

Lucid has partnered with Samsung SDI to co-develop the battery cells that will ultimately make their way into Lucid battery packs. All battery cells degrade over time due to a variety of factors like depth of discharge or environmental conditions, to name a few, so the universal goal is to minimize potential degradation. Rawlinson says these new cells are designed to withstand and minimize degradation: "The cell chemistry that we've co-developed with Samsung is groundbreaking in that it is very tolerant to repeated, cyclic fast-charging."

Samsung SDI will be the primary production partner, but Lucid is also working with a couple other prominent suppliers. Lucid will assemble the battery packs in-house, which will feature an advanced cooling system and industry-leading energy density. 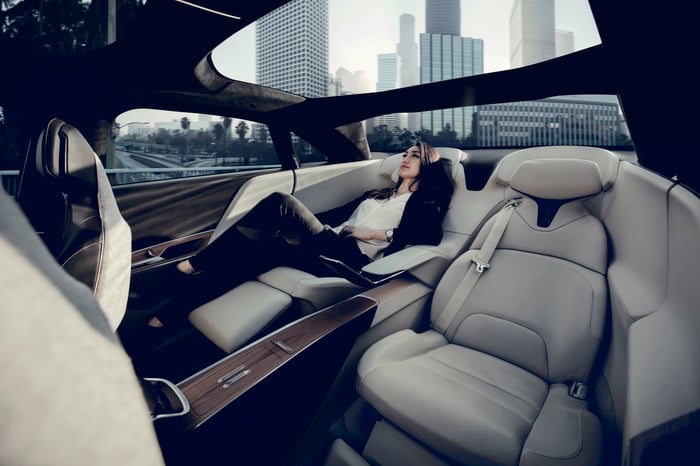 So much for fighting over who rides shotgun. Image source: Lucid Motors.

There are currently three prominent DC fast-charging standards throughout the world (China is working on a fourth), including Tesla's proprietary Superchargers that were born out of necessity given how immature charging standards and networks were back then. "Tesla took a leading role, it was the vanguard really, in creating a fast-charging network, and is to be applauded for that," Rawlinson adds.

Lucid hasn't picked a horse in this race quite yet. That's because the company is still at least two years away from production, and the charging landscape will inevitably shift by then. It looks like CCS is going to win out (CHAdeMO has been in decline for years), and Rawlinson thinks that's the route Lucid will take, but it has plenty of time to figure out which standard(s) to support (with adaptors if need be). "I think that we will see a maturity and proliferation of [the CCS] charging network by then," says Rawlinson.

We can all agree that the last thing the EV industry needs is yet another charging standard for consumers to navigate.

Rawlinson also gives Tesla credit for pushing forward with direct sales and service. As such, Lucid also plans on operating its own network of retail stores and service centers, according to Rawlinson:

We plan to create a network of stores and a service network. Now, that will have to grow organically as sales grow. Before launch, we're planning our first store, probably in the Bay Area. And we'll grow that network in a synchronous manner with sales. And yes, that will be challenging to start with, of course.

Given how antiquated the traditional dealer model is, having more companies advocating for direct sales -- an unfortunately litigious endeavor -- is good news for consumers.

About that $700 million factory

There have been plenty of headlines that Lucid is planning to build a $700 million factory in Arizona, which raises an inevitable question: Where is all that money going to come from? 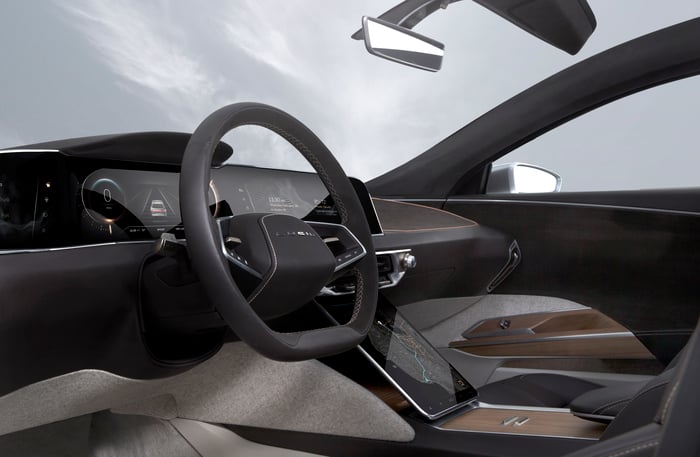 It's worth clarifying that Lucid is not planning on spending $700 million upfront, which would be reckless. Instead, the manufacturing facility will have three phases, the first of which is expected to cost $240 million. That should allow the company to ramp up to producing about 8,000 to 10,000 vehicles per year, with production commencing in 2019. Only after all three stages are completed (expected around 2022 if all goes well) will the total investment reach $700 million. At that point, the factory should have annual production capacity of 130,000 vehicles.

Lucid is currently working to secure its Series D financing round; once the funding is secured, then Lucid will break ground in the Grand Canyon state.

How Lucid will approach autonomy

In terms of autonomous driving, Lucid plans on using an "overlay of LIDAR, radar, and camera" for the hardware sensor suite. The company recently announced that it is partnering with Mobileye, which Intel is looking to acquire in a blockbuster $15.3 billion deal announced last month.

Lucid will use both long- and short-range versions of all sensors: wide-angle cameras, telephoto cameras, and long/short range radar and LIDAR sensors for maximum redundancy. Instead of using roof-mounted LIDAR systems, Lucid plans on using peripheral LIDAR sensors embedded into the sides of the vehicle; software will stitch the data together. This has functional benefits as well as aesthetic ones (no one will be calling the Lucid Air an ugly potato anytime soon). Rawlinson said:

Rawlinson reiterated that Lucid is quite cognizant of how difficult it is to bring a car to market, and it doesn't make sense to invest in autonomous driving software at this stage. The company needs to remain "laser-focused" on the car itself in terms of hardware and getting to production, which is mostly what its roughly 300 engineers work on.

There's a tendency to frame Lucid as a "Tesla killer," but such comparisons miss the point. Rawlinson clarifies, "This car isn't a Model S competitor; it's the next step forward. I certainly don't see it as a 'Tesla killer.'" Of course, Lucid will compete with Tesla on some level, but the main rivals will be the German automakers that dominate the $100 billion luxury segment of the market.

"What we've tried to do is create the next generation of car," Rawlinson said.