Please ensure Javascript is enabled for purposes of website accessibility
Log In Help Join The Motley Fool
Free Article Join Over 1 Million Premium Members And Get More In-Depth Stock Guidance and Research
By Leo Sun - Updated May 26, 2017 at 1:43PM

Over a third of J.C. Penney’s shares are being shorted. Are investors too pessimistic about the retailer’s long-term prospects?

But then several powerful headwinds struck, including the growth of internet retailers, waning mall traffic, and the financial crisis of 2008-2009. A doomed turnaround strategy led by former Apple and Target exec Ron Johnson then caused J.C. Penney to lose over half its market value in less than three tumultuous years.

J.C. Penney stock has fallen more than 90% over the past decade, but short sellers are still aggressively targeting the stock, with 34% of shares shorted as of March 24. That overwhelming bearishness looks bad for the bulls -- but can the stock really fall that much further from current levels? Let's take a closer look at J.C. Penney's headwinds, tailwinds, growth estimates, and valuations to decide.

No, J.C. Penney isn't the next Sears Holdings

The bears often compare J.C. Penney to another fading retailer, Sears Holdings (SHLDQ). While both companies face similar challenges, like internet retail and weak brick-and-mortar traffic, J.C. Penney is in much better shape than Sears.

Between fiscal 2012 and 2016, J.C. Penney reduced its store count by 8% to 1,013 locations. During that same period, Sears reduced its store count by 44% to 1,430 locations. If we compare the two companies' revenue growth over the past five years, it's clear that Sears' strategy of closing stores and selling the real estate is exacerbating its revenue declines. Meanwhile, J.C. Penney's revenue growth mostly stabilized after Ron Johnson was fired in 2013. 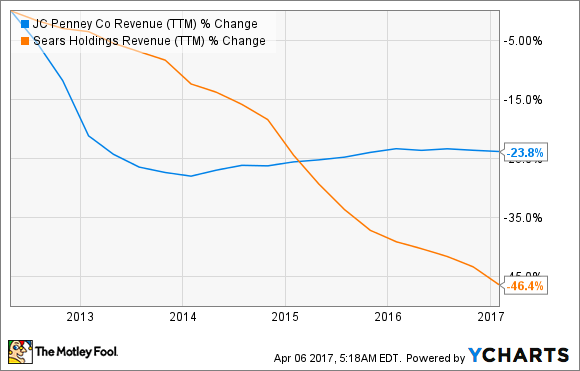 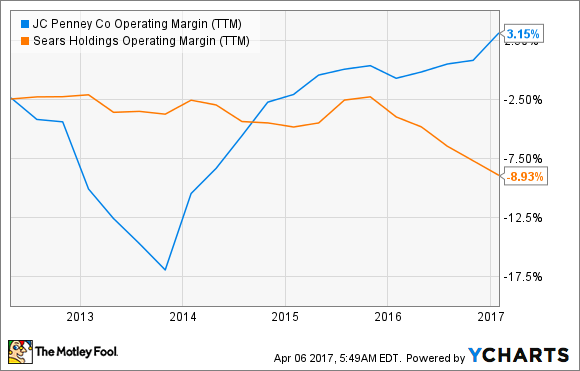 That's why analysts expect J.C. Penney to post a narrow annual profit this year, while Sears' bottom line is expected to remain deep in the red. Therefore, J.C. Penney isn't in great shape yet, but it definitely isn't the next Sears Holdings.

How does JCPenney plan to grow again?

First, it's forging new partnerships with companies like Ashley Furniture and Empire Today to beef up its home improvement department. That move was clearly inspired by the resilience of home improvement retailers like Home Depot (HD -0.11%) in the face of e-commerce threats. The reason was simple -- consumers generally still wanted to visit stores to test out and buy large home improvement products, and larger products were too costly to ship over long distances. J.C. Penney also notes that 70% of its customers are homeowners. 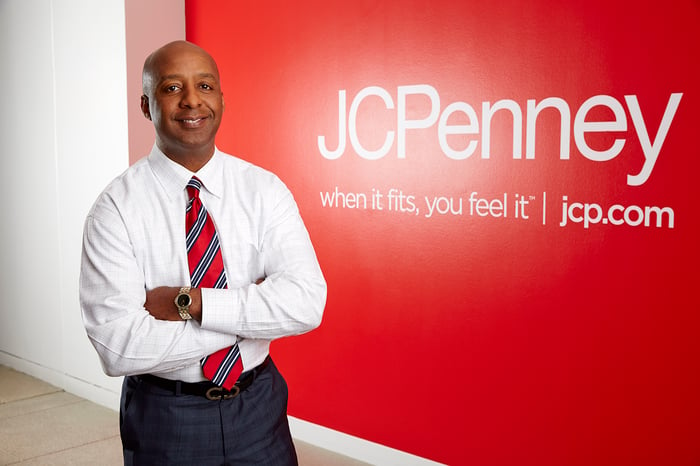 To strengthen its apparel business, J.C. Penney recently signed a deal to add Nike (NKE -2.13%) outlets to 600 of its locations to boost store traffic. This move, which will complement an expansion of its Adidas products, targets another weakness in e-tailing -- the need for consumers to try on shoes and athletic apparel before buying.

J.C. Penney also believes that offering more plus-size apparel -- another market which is tough to address for online apparel retailers -- will boost its brick-and-mortar traffic. It's also investing more heavily in activewear, a category dominated by companies like lululemon athletica, to reach more female shoppers -- which also account for 70% of its customer base.

On the digital front, J.C. Penney has been tweaking the functionality of its website. Customer service research firm ForeSee notably ranked J.C. Penney's website as the fifth best website of 2016, with its overall score rising 300 basis points annually. The company is also relying more on data-driven analytics to make pricing and promotional decisions.

J.C. Penney still has lots of work to do before it can achieve consistent growth again, but I believe that Ellison's ability to tether J.C. Penney to hotter retail trends is getting the company back on the right track. J.C. Penney's trailing P/E is negative due to its unprofitability over the past year, but it trades at just 10 times forward earnings.

In my opinion, shorting a company which has such a low valuation, high short interest, and improving prospects is a terrible idea. A single positive headline about profit growth or new retail partnerships could spark an overdue short squeeze. Therefore, I'm not suggesting that investors buy J.C. Penney today, but I think shorting the stock is definitely the wrong play at the wrong time.