Please ensure Javascript is enabled for purposes of website accessibility
Log In Help Join The Motley Fool
Free Article Join Over 1 Million Premium Members And Get More In-Depth Stock Guidance and Research
By Keith Noonan - Apr 6, 2017 at 8:49AM

Under Armour's Architech Futurist sneaker fits with the company's push into premium wear, but the company's brand could be heading to confusing territory.

Under Armour (UAA -2.71%) (UA -1.85%) recently launched a limited-edition shoe that represents some important steps for its footwear strategy. The Architech Futurist sneaker features a 3D-printed heal section that's said to provide a better quality of support. It also retails at $300 -- making it the company's most expensive shoe ever.

The footwear and apparel retailer is making a bigger push into premium product offerings, and the Futurist shoe looks to be a testing ground for the company on multiple fronts. It's already been a hit from a marketing perspective and generated plenty of media coverage, and it might signal the emergence of a useful new manufacturing technology, however the broader push into high-end could be complicated by Under Armour's recent signings with discount retailers.

What's the significance of a 3D-printed shoe?

Under Armour made its limited-edition Architech Futurist sneaker available on March 30, and the shoe's initial production run quickly sold out. Exactly how many pairs hit the market is unclear, but investors probably shouldn't count on the new sneaker to have a big impact on the company's sales this year.

The shoe is only available through Under Armour's website and a small number of the company's branded retail outlets for the time being, so sales volume will likely remain small. Rather than being a big revenue driver, the Futurist will probably be more meaningful as a branding tool that reinforces the notion of Under Armour as a premium, high-tech brand.

It could also serve as a testing ground for integrating 3D-printing into larger production runs. The Futurist is the second shoe in the Architech line and the second shoe from the company to feature a 3D-printed heel. Making the 3D-printed section of the shoe reportedly takes a full day, and the application of the technology for footwear and apparel is still in its infancy.

In a move that resembles Nike's (NKE -1.75%) strategy for some of its limited-edition sneaker releases, Under Armour is aiming to create a sense of excitement around its 3D-printed Architech shoes that extends to the rest of the brand. Scarcity drives interest among sneaker enthusiasts, and demand for premium and rare shoes can create a halo effect for other products in the brand line.

Under Armour styles itself as a clothing company with a heavy technology component, and CEO Kevin Plank believes in a "What does it do?" approach to making footwear and apparel. Innovation is a core part of the company's identity and brand appeal, and maintaining a high-tech, cutting-edge product line is important for its performance -- particularly as the company eyes becoming a major player in the unfolding wearable technology space and tries to command higher prices for premium products. 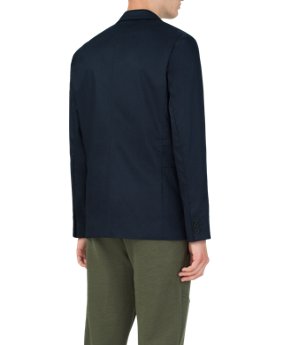 Under Armour Sportswear Draft Day Rowing Blazer, which retails through the company's website at $219; Image source: Under Armour.

In September 2016, the company launched Under Armour Sportswear (UAS) -- an offshoot brand that specializes in high-fashion clothing. Under the UAS brand, the company sells high-end shoes, blazers, pants, shirts, and even a $1,500 trench coat.

Under Armour's premium vs. discount problem

Happening concurrently with the push into premium, Under Armour has recently signed deals with discount retailers DSW and Kohls. While pushing into new distribution channels is seemingly a win for the Under Armour, it's possible that these moves could devalue the brand and work against the company's efforts to move upmarket.

Here's Kevin Plank on the importance that succeeding with high-end products has for the company, and how this plays with the company's presence in discount retailers:

We learned that our segmentation strategy could be sharper, that being premium at every price point and having the right product for the right consumer at the right time is the price of admission. And we learned that when we play in a discounted environment, we can drive volume, and win, but the role both we and our retailers expect us to play is as a premium, full-price brand.

Under Armour is under pressure after disappointing sales results have thrown some kinks in the company's growth story. Domestic sales growth lagged in the last quarter, and overall sales growth came in at 12% when previous guidance called for roughly 20% growth. With the company now guiding for sales growth between 11% and 12% for the current fiscal year, there are concerns that its brand appeal could be softening. If momentum is weakening, too much presence in discount retailers could worsen unfavorable trends.

Last year, Nike's LeBron 13 sneakers launched at $200, while Under Armour's Curry 2 shoes hit shelves at $130. With NBA stars LeBron James and Stephen Curry at similar levels of popularity, much of the pricing disparity between their respective sneakers likely comes down to the strength of the underlying brands.

While premium offerings like the Architech Futurist shoes and the Under Armour Sportswear line might become meaningful sales contributors, they could potentially have an even bigger impact by raising the perceived value of the Under Armour brand and allowing the company to command higher prices from its core product releases.