Sales grew modestly, but a chance in China's tax structure led to a big profit jump.

Shares of Chinese fast-food giant Yum China Holdings Inc (YUMC 2.69%) are up 11.3% on April 6, 2017 at 12:23 p.m. EDT, following the release of the company's first-quarter financial and operating results before market open today.

Yum China Holdings, which operates over 7,500 KFC, Taco Bell, and Pizza Hut restaurants in China, and also owns the East Dawning and Little Sheep chains, reported revenue of $1.3 billion and earnings per share of $0.44. 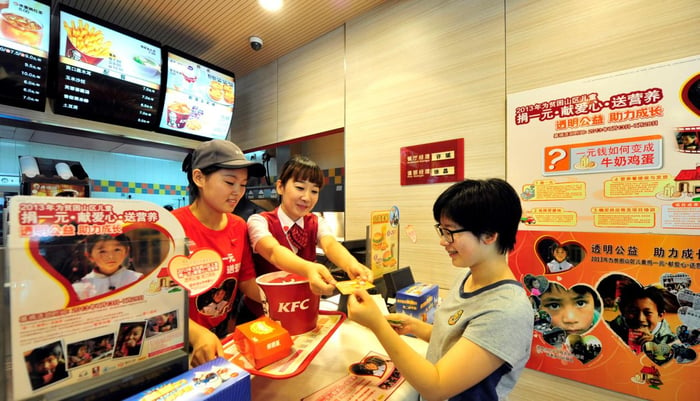 This was a mixed result, at least based on Wall Street analyst expectations. The consensus estimate was for 1.6 billion in revenue, and earnings of $0.26 per share.

Compared to the year-ago results, revenue was down 2%, while earnings were up 12%, with foreign-currency exchange playing a big role. Before currency impact, total system sales were up 4%, while same-store sales -- that is, sales at locations open for more than one year -- were up 1%. Operating profit increased 22% (27% on a currency-neutral basis).

The implementation of a new retail tax structure is on track to boost Yum China's profits in the upcoming quarters, but currency exchange rates are likely to continue impacting the results when sales are translated back to U.S. dollars, so it's important to look at the company's results both on a reported and currency-neutral basis.

And on that basis, growth is slow but steady. Management expects it can continue leveraging its scale -- Yum China operates twice as many restaurants as its nearest western quick-service competitor -- to grow operating profits by double digits this year while adding up to 600 new locations. The company is also working to grow its delivery business, which accounted for 12% of sales in the first quarter.

Yum China's brands are widely recognized across China, and the company's long-term opportunity remains solid, as the Chinese middle class continues to grow. If the company can avoid the pitfalls that occurred under its former parent YUM! Brands in the past, there's still plenty of potential for these restaurant brands in the Middle Kingdom.