The names here should come as no surprise, and that’s a testament to the power of the profit-producing business models.

Tech giants Apple (AAPL 1.30%) and Samsung (NASDAQOTH: SSNLF) are, without a doubt, the two best income investments among mobile device makers. This might come as something of a surprise, though. According to researcher IDC, Apple and Samsung combine to produce only about one-third of all smartphone shipments as of Q3 2016.

The corporate world's largest and richest company, Apple mints tens of billions of dollars each quarter from sales of its popular iPhone. In fact, Apple's iPhone is so popular that the company regularly captures the vast majority of smartphone industry profits each quarter, with Samsung typically collecting the remaining profits. Most other handset OEMs operate at, or near, breakeven.

Apple's cash hoard is also well known, at this point. The Mac maker carried $246 billion in cash and investments on its balance sheet as of its most recent quarterly report, roughly $230 billion of which currently resides overseas due to repatriation tax consequences.

Crucially, the company currently has just $49 billion -- a dollar figure that could seem tiny for a company of Apple's scale -- remaining on its current capital-return program. It seems relatively safe to assume that Apple will allocate further funds for dividends and share repurchases this year, particularly given the coming earnings boon that seems likely with the release of the iPhone 8 this fall. So while Apple's current 1.6% dividend yield might seem underwhelming relative to the S&P 500's 1.9% yield, Apple's insane profitability makes it my top pick for long-term dividend investors in the mobile-devices space. 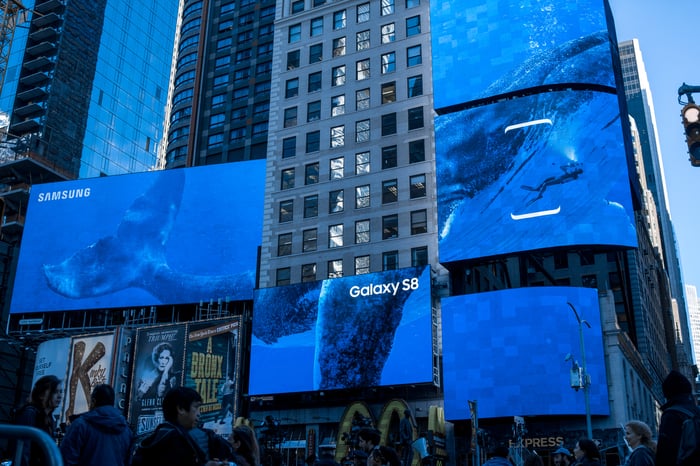 Though not as profitable as Apple, Korean tech giant Samsung also deserves investors' consideration for its income-producing prowess. The yin to Apple's yang in today's current smartphone duopoly, Samsung stands as the second most profitable company in this increasingly mature space. At the same time, Samsung's broadly diversified revenue base -- organized around three massive lines of businesses -- should help derisk the company's ability to issue cash payments to investors, even as the global technology landscape evolves in the coming years.

Samsung's dividend currently yields just 1.6%. That's not too exciting, at least on the surface. However, the evidence suggests that Samsung will raise its dividend appreciatively in the year ahead.

In recent years, the company came under pressure from activist hedge fund Elliott Management, which initially proposed splitting Samsung into two separate entities. To placate this unease, Samsung said it will distribute roughly 50% of its free cash flow via dividends. And though I can't find free cash flow growth estimates for Samsung, sell-side analysts' top-line and bottom-line estimates should serve as something of a useful guide to help frame expectations about free cash flow in the year ahead.

Of course, neither estimate alone will be perfectly predictive of Samsung's free cash flow growth this year, although the positive trend seems fairly obvious. Lavishing dividends on current shareholders could also prove good politics for Samsung, given its current leadership uncertainty.

Samsung CEO Jay Lee has been embroiled in the current corruption scandal that has rocked the South Korean political establishment. In fact, last month, a South Korean court ordered the arrest of Jay Lee on charges including "bribery, embezzlement, hiding assets overseas and perjury," according to Reuters.

Given Samsung's massive size and deep bench of talented managers, the company's financial performance shouldn't be derailed due to the negative publicity -- case in point, the above growth estimates. However, this case does bring an ugly black cloud over the entire company, which is why an aggressive dividend policy could help shore up investor confidence for the consumer electronics giant.