Both of these companies are focused on helping entrepreneurs sell products online, but which is the better choice for investors today?

If investors want to tap into the growing trend of e-commerce and diversify their portfolio beyond Amazon, Shopify (SHOP -2.76%) and Etsy (ETSY 0.59%) make the shortlist. Shopify is more a pick-and-shovel play, as the company has built a powerful back office platform that essentially enables entrepreneurs to run an e-commerce business from their phone. Etsy is a pure play marketplace that focuses on serving the creative entrepreneur. These two companies had similar revenue in 2016, were both started in almost the same year (Etsy 2005, Shopify 2006), and are in the business of helping product-selling entrepreneurs connect to buyers online. Let's take a deeper dive into these two companies and see which is the better buy.

Shopify has been behind the scenes building a platform that allows entrepreneurs to create a personalized e-commerce website, to sell on platforms such as Twitter or Facebook, and manage back office functions for their business. Shopify now serves over 377,500 merchants such as Tesla, Wikipedia, Nestle, and Mindzai. Shopify makes money from collecting a monthly subscription fee for the use of its platform, as well as a small cut of the transaction when a product is sold.

Shopify's business is growing tremendously fast. From its most recent earnings release, the company reported 55% more merchants on the Shopify platform. These customers are driving the company's subscription services revenue up even higher, 63% year-over-year. The merchants on Shopify's e-commerce platform sold an incredible $15.4 billion worth of products last year, driving a 108% increase in Q4 merchant solutions revenue. All of this adds up to an 86% quarterly year-over-year revenue growth for the e-commerce company. The company is expected to continue its hyper-growth trend in 2017, projecting 55% to 60% revenue growth for the coming year. 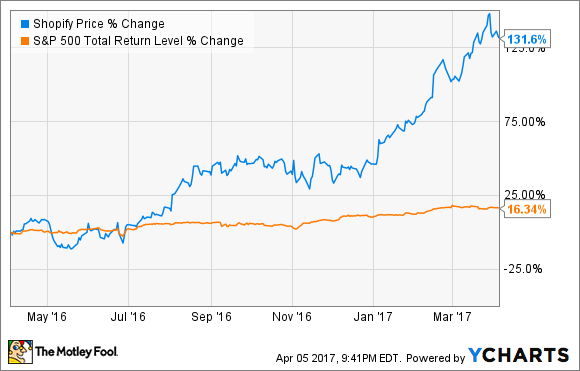 Is the stock too expensive? Shopify is now a $6 billion market cap company with a lofty price-to-sales ratio of 15.9. The price to earnings ratio doesn't make sense to look at, as Shopify is not yet profitable. This company reminds me of Amazon in the early days, with great growth, no profits, and an "expensive" stock. Shopify has said its total addressable market could be up to $57 billion. Compared to 2016 revenue of $389 million, suggesting that Shopify still has plenty of room to grow.

The case for Etsy

Etsy is a "global creative e-commerce platform". The company allows creative entrepreneurs to list their goods on Etsy.com for a listing fee of $0.20 and a 3.5% cut when the sale is made. Etsy has over 45 million items for sale in 50 different categories including jewelry, craft supplies, music, and a wedding category called "something blue." The marketplace has 1.7 million active sellers and 28.5 million active buyers, who purchased $2.8 billion worth of goods in 2016. In addition to revenue from the marketplace, Etsy makes money supporting creative entrepreneurs start, manage, and scale their e-commerce business by offering services such as payment processing, advertising, shipping labels, and independent websites. This seller services business has grown to 55% of the total revenue.

In the most recent quarter, Etsy grew its number of sellers 11.8% year-over-year, buyers 18.8%, and gross merchandise sales 16.7%. Etsy's revenue grew 25%, led by seller services growth of 30.7%. The online marketplace is expecting to continue revenue growth in the 20%-range for 2017, guiding for 20%-22% full-year revenue growth. Though the company is unprofitable, and has no projection as to when the company will show a GAAP profit.

The stock has returned a market beating 21.6% in the last 12 months, but the ride for investors has been a rocky one. 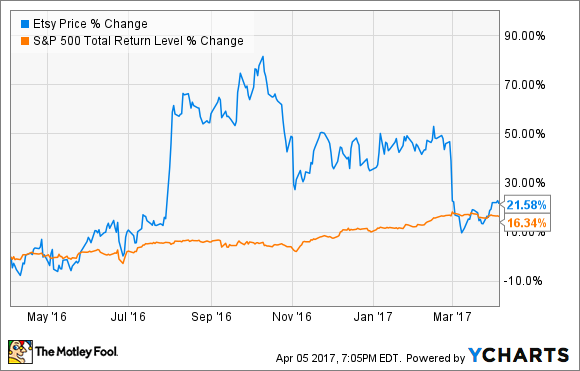 The price jump in August 2016 was due to a positive second quarter earnings report and a Citigroup upgrade. The price drop in March 2017 was due to the larger than expected loss from the fourth quarter earnings report due to the expenses of the Blackbird Technologies acquisition and marketing costs. It seems Etsy hasn't figured out how to deliver consistent results as a public company yet.

Etsy's stock seems more reasonably priced at 3.4 times price-to-sales. While Etsy hasn't published a specific total addressable market number, it says that the market for craft supplies in the U.S. was $44 billion in 2016. Etsy indicates that 8 million of 45 million items listed on its marketplace are craft supplies. With a total of $2.8 billion of global product sales in the last year, for all its categories, this shows that Etsy still has a large growth opportunity.

While Etsy's $1.2 billion market cap looks like an inexpensive way to invest in the growing trend in e-commerce, a statement from Chad Dickerson, Etsy's CEO, from the latest earnings call concerns me.

In terms of raising brand awareness, research studies show that perception among existing buyers is that etsy.com is a shopping destination just for special occasions. This couldn't be further from the truth with nearly 45 million items across more than 50 retail categories, there's something for everyone.

If Etsy's active buyers are only visiting the site for gifts and special occasions, visits to Etsy's marketplace are primarily a discretionary purchase, and could be overly impacted by changes in the economy. As a comparison, Shopify's merchants sold an average of $40,795 worth of products last year, compared to Etsy's $1,647-- enabling Shopify to scale its platform more efficiently. While Shopify looks expensive, it also has a tremendous track record of consistent revenue growth, consistent cost scaling, and a projection to become profitable in the fourth quarter of 2017-- all of which makes Shopify the better buy.